Me & the Disney Ducks! 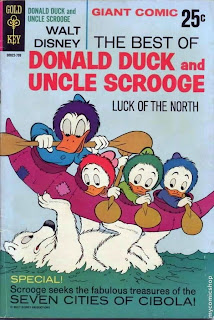 Since December I have been reading through about 4 boxes of Walt Disney Comic Books featuring the art and stories of the master Carl Barks. My appreciation of Barks has only increased to the point I would not hesitate to call him the greatest comic book writer and artist (yes, both) anywhere in the world at anytime. At the rate of two or three comics a day, I still have a few to read but not that many.

I own the hard cover compilation "Walt Disney's Uncle Scrooge McDuck: His Life & Times," which is on ebay for $600, but I have not read the stories in there.  I prefer reading the original comic books that are either reprints or poor condition and so are worth very little.  The reprint on the left with two classic tales currently sells for only $7.

By accident I have a poor condition issue of Barks' very first Donald Duck story -- "Victory Garden" -- from Walt Disney's Comics and Stories No. 31, April 1943.  Some pages are missing but not from the Barks story.

When I was growing up in the 1950s my father owned and ran a drug store in the small town of Deerfield, Wisconsin.  A population at one point of 710 sticks in my head.  Deerfield served farmers in the area and, being a half hour from Madison, is today a thriving community of commuters to the big city.  Way back then the main street was one block long with a bank, drug store, grocery store, doctor's office, hardware store, insurance office and single restaurant on that one block.  The family of mom, dad and 3 kids lived in a tiny apartment above the store.  My father bought the building next door and turned it into a larger drug store shortly before he died of a bad heart in 1958.  It is still there but the original store with upstairs apartment was torn down for a driveway for the bank on the corner.

Many features of the first drug store are burned into memory.  Soda fountain where I could make myself any sundaes, phosphates or malts I wanted.  Candy that I did not have permission to eat but that I occasionally pilfered.  Patent medicine bottles leftover from the 1920s -- not for sale, I hope, but hanging around for some years.  Mogen David wine on one shelf.  A few shelves of toys.  Girlie and stag magazines that turned up in the back room with covers torn off when I was around ten.  Yes, I remember those.  Storage in the basement that was spooky with the lights out.  A little work bench back in a corner where I played with a chemistry set and built model planes.

Last but not least, the store had a well-stocked rack of comic books and magazines.  I swear the store did not carry Superman or the other super heroes.  I only read those off the racks at a drug store in neighboring Cottage Grove or the Madison bus station.  My brother swears the store had super heroes.  One early memory was the horror comics.  I recall being scared by one where a man digs up a coffin to steal a jewel only to find rats pulling the corpse into a tunnel, so he follows them in....  Suddenly, one day, no more horror comics, but the E.C. science-fiction ones continued for awhile.

I did read every comic that came in.  I did not buy them or save them, just read them off the comic rack and put back -- Archie, Fox and the Crow, Little Lulu, Porky Pig and friends, Roy Rogers and lots of westerns, Classics Illustrated, etc.  My favorites of all were the Donald Duck and Uncle Scrooge adventures.  But one grows up and like many others I put comics behind when we moved to Madison for my high school and college years.

When I moved to Minneapolis in the 1970s I became friends with David Mruz and other comic collectors.  There was a comic book store and comic conventions.  At some point I bought a lot of Disney comics at cheap prices and continued buying the early years of Gladstone Comics reprints in the 1980s, and hence the 4 boxes I have held onto. 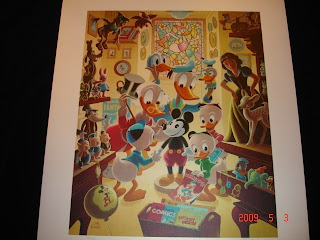 For about five years I owned the Carl Barks lithograph "In Uncle Walt's Collectory" shown here.  Bought it for around $500 and sold for $600 or so, as I recall.  You can get a mint one on ebay for $850 so they have not gone up that much.  My wife Chris always commented that the weird eyes on the ducks kind of creeped her out.

Most of the epic Barks adventures have been re-printed again and again, so I have acquired reading copies of all the major epics going back to "Pirate Gold" in 1942.  That is, all except for the 1946 story "The Terror of the River" that I don't recall ever reading.  I'd like to borrow the Gladstone reprint from someone.

Favorite stories among hundreds....  "The Old Castle's Secret" from 1948 with Donald, Uncle Scrooge in his second appearance and the nephews -- for sheer spookiness in a great castle.  Funniest Duck story ever: "Letter To Santa" (1949) in which Huey, Dewey and Louie want a toy steamshovel for Christmas but Donald and Scrooge get them real ones instead.  After a battle, Donald disguises as Santa to tell the boys he is out of steamshovels, then the real Santa enters to clear it all up.  Favorite Scrooge adventure: "Seven Cities of Cibola" (1954) for the fabulous trek thru the desert to untold riches.

So nothing about movies today, just about what I've been doing.  Reading comic books.  Think I will go read another tale or two about Donald and the boys.


Visit my website www.fesfilms.com.
Posted by Ron Hall at 12:10 PM