Quest for the Lightning Warrior! 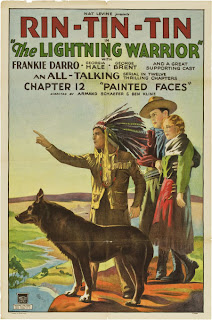 The Lightning Warrior is a 1931 Mascot serial starring Rin-Tin-Tin. The mysterious, black-cloaked "Wolf Man" leads a band of Indians in terrorizing settlers in a western town. With the help of Rinty, young Jimmy Carter unmasks the Wolf Man and foils his evil plot. Jimmy is played by 14-year-old Frankie Darro who made 6 Mascot serials. The hero, Alan Scott, is actor George Brent in his first film and only action film. George spent the next 20 years in Warners dramas opposite Bette Davis and the like. Aging dog star Rin-Tin-Tin, who is doubled in some scenes, died a few weeks after completion.

I have always felt The Lightning Warrior is one of the best Mascot serials. Other serial fans don't agree with me, which could be because they never had a chance to properly see it like I did as a child. The film needs a major restoration. I have been looking. The following dates are approximate. 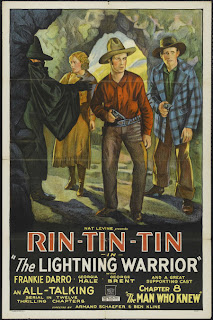 1953. At the age of seven I watch The Lightning Warrior one chapter a week on TV. It captures my imagination as few films had up to then due to the chapter endings, stunts, location sets and horror elements. Yes, horror. The mystery villain is cloaked like the Phantom of the Opera with a wide black hat that obscures his face. His every appearance is forewarned by howling, shadows and darkness. He hangs out in caves where he meets his minions. Many are suspected, but no one knows his identity.
Location filming was done in rugged mountain terrain on real sets of sawmills or mining camps. The second chapter ending is one of my favorites from all serials, partly because of the mining setting. Small ore cars suspended on cables like a sky ride in an amusement park transfer ore across a gorge. Jimmy and Alan chase the Wolf Man to the actual location but Alan is delayed by henchmen. The Wolf Man climbs into one of the ore cars to escape and young Jimmy leaps as it leaves the station, catching and dangling from the rim. Rin-Tin-Tin jumps into the car and battles the cloaked villain. The bottom of the ore car opens and Rinty plummets. Jimmy lunges for his pal....
In the 1950s the Mascot serials were distributed to TV stations around the country on 16mm prints that were newly struck from the original negatives. They got a lot of use!

1971. I spend 3 weeks in New York City. Courtesy of Leonard Maltin I am introduced to "Joe's Place," a weekend film club run by Joe Judice. It's a real hole in the wall a few blocks from Times Square, maybe 16 foot square where 20 fans could crowd in. Film buffs who frequented the place that I later came to know include John Cocchi, Alan Barbour, Rick Scheckman and Ed Hulse. They often watched triple features of B-westerns, but on the Saturday afternoon I came they showed the complete serial "Daredevils of the Red Circle." Joe had a large serial collection including one of the TV prints of The Lightning Warrior.

1986. (That's a jump, isn't it!) My wife and I host Cinecon 21 in Minneapolis, and select some of the films. I heard that Joe Judice would attend and I asked Joe to bring the first three chapters of The Lightning Warrior since I had not seen any of them since I was a kid. We scheduled them for midnight, then find I don't have the energy I used to for late night showings, and so have to stand during the screening to stay awake. Through dozing on my feet I am still impressed by the serial, especially the endings of chapters 1 and 2.

Joe Judice moves back to Puerto Rico. He and his films disappear. 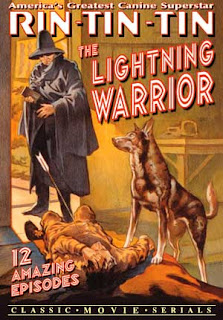 2003. I watch The Lightning Warrior on VHS from VCI Video, who no longer sells it. l am sorely disappointed for two reasons. First, pretty lousy quality. You can make out what is going on and follow the plot, but it is just below a standard I can enjoy. I understand why no one else is much excited by the film. I try different versions from Alpha Video and Mill Creek Video, but all came from the same poor film transfer.

Even worse, the last five minutes from Chapter #1 is missing! This terrific action scene with great camera and stunt work sets the tone for the rest of the film that anything can happen. Some of the settlers try to escape in covered wagons but are attacked by Indians in a running chase battle that Republic did so well a few years later. The heroine gets knocked out back into the wagon. Alan Scott transfers to the horses to control the wagon. An Indian also jumps to the horses and they grapple on the wagon tongue. They fall between the horses and hang under the wagon until Alan kicks the Indian away. Yes, it is Yakima Canuut, the king of stuntmen, doing his most famous stunt that he performed so many times like in Stagecoach. This is the very first time Yak ever fell between horses under a wagon and yet managed to get back up!

When Alan gets back in the wagon with the heroine they are far from safe. The horses run off, the wagon stalls and begins rolling backward down a long hill. Escape seems hopeless with the Indians in hot pursuit, especially when the wagon rolls over a cliff and crashes below for the fade out. How could they possibly escape? Although missing in all current DVDs, I knew this was the chapter ending because it shows up in the re-cap to Chapter #2. I recalled the under-the-wagon action from having seen it myself though quite a few years earlier. 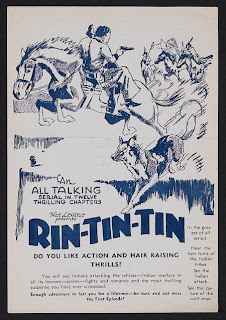 2004. I go to a friend's house (Dan Bursik) to watch films. Among others we screen the 1936 Gene Autry film The Big Show. Gene plays a stunt man in B-westerns and in the first scene a Hollywood camera crew films the lost action footage, the Indian attack, from The Lightning Warrior! It is stock footage with close-ups of Gene replacing the close-ups of George Brent. Mascot producer Nat Levine also produced The Big Show for Republic.
I take this scene, the head of chapter two and the Indian attack on wagons footage that is repeated in Chapter 12 to recreate the lost footage. My version runs just over two minutes.

c. 2007. I become friendly with Bruce Cardoza who has a company Restored Serials. Please check out his site since his serial quality is excellent. After awhile I tell Bruce about my quest to find the lost ending to Chapter #1 of The Lightning Warrior. 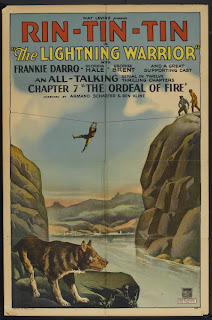 He obtains a VHS copy from a long time serial collector who does not recall where or when he got it, but the ending is all there. Bruce times it at about five minutes but reports the VHS quality is not good enough to warrant restoration efforts. However, he could insert the missing scenes into a new film transfer if he could find a 16mm or 35mm print. On a related front, The Serial Squadron does have the 16mm print that the incomplete videos came from. They could obtain better quality with a new transfer, but don't want to issue one with such an important scene missing. Bruce and the Serial Squadron have not reached an agreement for working together.

And that's where the matter stands. If I visit Bruce in Hollywood he will show me the footage. If and when he can restore the film he will surely do so. Perhaps the footage will turn up somewhere else. Perhaps Joe Judice's print still survives and will surface. Perhaps SONY has 35mm material on the Mascot serials, since I have heard that they purchased the library years ago. All of Mascot's films are in the public domain.

The quest goes on. I hope to re-see The Lightning Warrior someday to re-live a thrill from my youth. Here is my Chapter #1 ending restoration plus the cliffhanger from Chapter #2:

Visit my website at Festival Films
Posted by Ron Hall at 12:23 AM