Merry Christmas and a Happy New Year, everyone! I just found the photo I referred to in my Aug. 22, 2009 blog. Since Santa Claus is also in the picture, it must be Christmas time! Or could it be the Mystery Science Theater 3000 costume ball at their first convention?

So I found the 9/19/94 New York Times in the bottom of a box of movie posters. The picture was not on the cover like I remembered but way back on page 2 of the entertainment section. I built the robot head out of fiber glass using techniques I had learned in the prop department at the Guthrie Theater. In retrospect, the head is too big for the rest of the costume since I am no giant, although it helped boost the costume above 7 feet. I won first prize, probably for strutting around in discomfort, and almost fell getting off the stage. The only video we have of the robot in the parking lot and entering the convention is incorporated into THIS VIDEO.

Click on the photo to open it full size. Besides me, the big tin one, Scott Johnson is a deranged Torgo from "Manos, the Hands of Fate." Scott is my brother-in-law. My son Jeff (age 13 at the time) is the short Torgo in the middle. My wife Chris is behind Scott with her back to the camera. Santa Claus is...?

So Merry Ho-Ho-Ho Christmas from the Hall family, 1994. 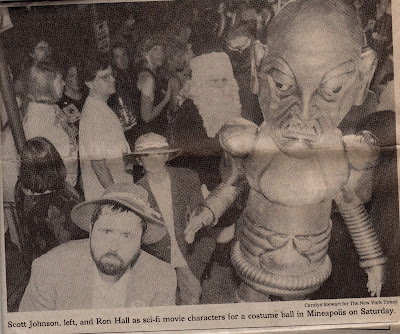 Visit my website at Festival Films
Posted by Ron Hall at 9:49 AM