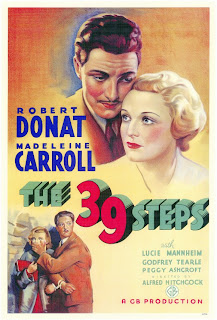 At the climax of Alfred Hitchcock's 1935 suspense classic The 39 Steps, hero Richard Hanney yells at the stage of the crowded London Palladium the enigmatic question: "What are the 39 Steps?" This is my favorite movie moment ever! These are my fond reflections on that oft-viewed scene that still stops my heart with anticipation of the answer.

The specific answer (revealed under the video below) really doesn't matter. In the John Buchan 1915 adventure novel from which Hitchcock borrowed the title and hero's name but little else, the 39 Steps refers to a specific location in Scotland where 39 steps lead down to the ocean. I read the novel as a teenager but don't recall details. I hated the 1959 color remake because it copied the original scene for scene but extremely poorly. The 1978 and 2008 versions go back to the book and I need to check them out.

Needless to say, do not read further unless you have seen the 1935 original. You can watch it online right this second if you subscribe to Netflix. A high quality six-part download starts here on Youtube. The last seven minutes that include my favorite movie scene and favorite moment are in the video below. 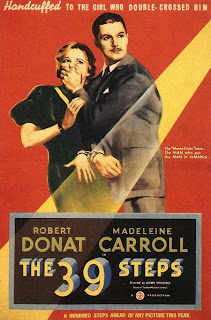 Let's back up. Many of these blog ramblings are about what films impressed me when I was young, because those happy times turned me into the raving cineaste who continues to watch away his life. Not a complaint, but that's who I am. I first saw The 39 Steps in 1964 when I was a senior in high school. I saw it in the small movie theater inside the University of Wisconsin student union in Madison. Though not yet a college student, anyone could walk in to see the films. Both my mother and father had attended the U. We lived about one mile from the western edge of the University and five miles from the student union on the eastern end, and I was comfortable going there on my own.

I had long been a Hitchcock fan from his 1955-1962 Alfred Hitchcock Presents TV show. I had lived through a solo theater viewing of Psycho (1960) when I was 14, and had seen The Birds first run in a theater only recently. However, I had never had the chance to see The 39 Steps or any of his other early films. They did not show British films on TV in those days. No video, either, though it's hard to imagine those dinosaur days before VHS came into common usage around 1980. Few film books had been written either. I had William Everson's "Classics of the Silent Screen" (1959) but his "Films of Laurel and Hardy" was not published until 1967.

I mention the dark ages of film scholarship and accessibility to explain one simple fact: when I walked into The 39 Steps screening that memorable evening, I had absolutely no idea what the film was about! I only knew it was an Alfred Hitchcock film about an innocent man on the run, pursued by both the police and a spy ring. I assume I knew that much, but I had read nothing more. The time, location, setting and viewing age can all affect one's reaction to a great film. Watching it for the first time today on Youtube you can see how good it still is, but you can't possibly share my emotional response. 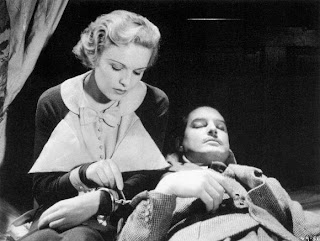 I'll skip most comments about great acting, sets, camera work, ingenious plot and man-on-the-run theme that Hitchcock used many times. I do love that vintage helicopter! There is a big surprise right in the middle when Hanney is shot point-blank by the villain and crumples to the floor. You expect he will get out of his predicament in some manner when he walks into the lion's den, but not by being shot dead. Like the shower scene in Psycho, after this point the viewer can be led down any garden path the director chooses, or is it "up?"
One escape and adventure follows another with the hero and viewer wondering "What the heck is going on?" right up to the denouement in the London Palladium. The suspense builds by painting Hanney into an impossible trap. Wanted for murder, he is surrounded by dozens of police closing in. Only he and Pamela (Madeleine Carroll) are aware of a spy ring stealing secrets that day and that moment. Hanney connects the villain with a missing finger to the vaudeville act onstage, Mr. Memory who knows everything. The viewer figures it out at the same time, and yet how can Hanney possibly extricate himself? How? How? How? The question lingers as the suspense builds. There is no obvious way out. 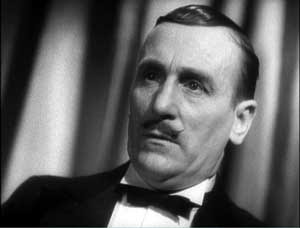 The quick thinking of the hero saves the day, unlike conventional climaxes resolved by a bullet, fight or chase. Hanney turns the tables on Mr. Memory by challenging him in his own act with the question "What are the 39 steps?" In the brief moment that follows the viewer absolutely knows that Memory must answer, because his professional reputation is at stake. He knows everything and must answer all questions, even if the last question will lead to his own death. He answers, is shot, the bad guy is apprehended and the film fades out within three minutes. It's a surprise ending out of the blue and a most satisfying one. Partly because of when I saw the film in my viewing life, I count it as my very favorite scene and climax of all the movies I have seen. Ever.
Re-watch the climax of Alfred Hitchcock's 39 Steps here: 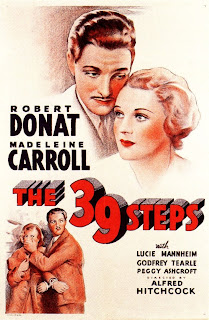 And what are the 39 Steps? Mr. Memory answers Richard Hanney's question from the audience: "The 39 Steps is an organisation of spies, collecting information on behalf of the foreign office of ...." A bullet cuts short the revelation.

A quick note on posters for the film. The color poster at the top is from the original 1935 release. One sold in 1992 by Christies for $14,300. The similar poster to the right was taken from the exact same litho plates, but with less color. Although undated it is assumed to be from the 1938 re-release. This poster sold in 2002 for $920. I have a near-mint example of this 1938 poster hanging on my wall, and have decided to keep it rather than testing the current market value at auction. Time may prove it to be more valuable. It is right now to me.

Visit my website at Festival Films
Posted by Ron Hall at 8:19 AM