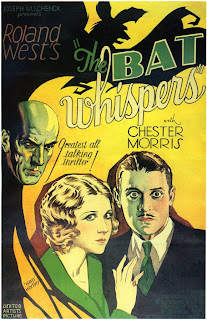 I have always been fascinated by "haunted house" films and TV shows. The earliest one that made an impression was some version of Mary Roberts Rinehart's THE BAT glimpsed on a flickering TV. This might have been the "Broadway Television Theatre" version broadcast live in November of 1953 when I was 7. There is also a "Dow Hour of Great Mysteries" version from 1960, which I should have remembered more clearly being 14 at that time. It is unlikely either will ever surface for a re-see. My memory is people walking down dark hallways and stairs by candlelight. A masked madman stalks the creepy mansion. Suspense builds. The unseen in the shadows engenders fear until... something happens. 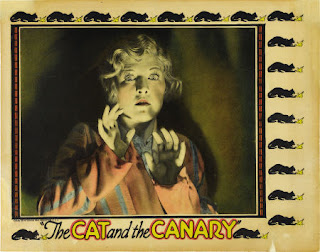 That pretty much sums up horror films! I always try to watch a haunted house film today, but mostly they put me to sleep. Seriously, most do not deliver and simply bore. What still spooks one today is a good question with a different answer for everyone. The 1927 Cat and the Canary superbly establishes mood with terrific sets and camerawork, but excessive comedy and unappealing stars Laura LaPlante and Creighton Hale weaken the second half.

The 1930 sound remake called The Cat Creeps is a lost film! I urge you to watch the fascinating 1 minute and 43 seconds that survive although without sound track here on Youtube. The 1926 version of "The Bat" succeeds with eerie shadows and real danger, as does the fascinating 1930 remake by Roland West shot in 70mm widescreen! I need to re-watch the 1959 version with Vincent Price and Agnes Moorhead though I've always felt it lacked shadows, dark camerawork and mood. 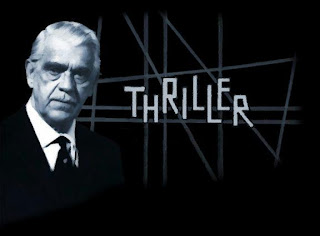 Other childhood horrors I remember fondly lurched through the gothic episodes of Boris Karloff's Thriller, all of which were released on video this year. I have been watching them daily for the past few weeks courtesy of Netflix. Half of them are merely crime stories and I skipped a few. Ah, but a lot of the scary shows are absolutely terrific with stories by Robert Bloch, direction by John Newland, Ida Lupino and John Brahm and starring William Shatner, Henry Daniell, Patricia Medina, Ron (Sherlock Holmes) Howard and Karloff himself. Better yet, the best ones still frighten. You can watch a six minute Promo Reel with highlights from the spookiest shows. One viewer commented the following, which is better said than I can:

"The horror episodes of Thriller are the best ever done. They are truly frightening - not the pathetic hack/slash/gore formula common nowadays, a poor substitute for geniune fear,﻿ which these episodes so convincingly convey. They are in a class by themselves, true masterworks of the horror genre. Beg, borrow, or steal a video copy of them. Wait until night, when things are still, then turn off the lights and watch them. You will not be disappointed."

The episode I remembered by title all these years since 1962 was The Hungry Glass with William Shatner. It unfolded a bit different than I recalled, but the scene of two ghosts pulling the heroine into the mirrors startled me. They all have outstanding sets, dark lighting, shadows and slow trips up stairs to the locked door. Some are half hour stories stretched to fill hour shows, but the padding creates suspense that today's TV has no patience with. The first horror episode is the seventh show in the series -- The Purple Room. A man must stay overnight in an eerie house in order to inherit. He is visited by a specter resembling the James Cagney make-up of Lon Chaney's Phantom of the Opera for "Man of a Thousand Faces."

Karloff first acts in the tenth episode, "The Prediction," about a mentalist who starts seeing the truth about the future. A good show but not scary. "The Cheaters" features a decrepit house where spectacles are created that show the wearer the truth; years later a man returns to the even more run down place to see his truth, which naturally drives him mad. Don't miss "The Well of Doom" with Henry Daniell costumed like the vampire in London After Midnight and acting like the Devil himself. Don't miss "Parasite Mansion," "The Prisoner in the Mirror," "The Premature Burial" or "The Devil's Ticket." 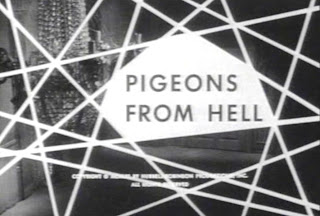 Perhaps spookiest of all is "The Pigeons from Hell." Adapted from a Robert E. Howard story, taking place entirely at night, two brothers from up north whose car is trapped in the mud somewhere in the Deep South who take refuge in a deserted plantation house devoid of furniture surrounded by noisy pigeons who give off otherworldly vibes. As they settle down for a night's sleep, one brother ventures upstairs, only to return a few moments later with a split forehead, blood streaming down his face, hatchet in hand and looking ready to kill. The other brother flees the big house, runs into the woods, falls down, and is found by the local sheriff to whom he relates his harrowing experience. The investigation continues into the night and into the gloom of a forbidden room where the lantern keeps blowing out.

Visit my website at Festival Films
Posted by Ron Hall at 11:49 AM