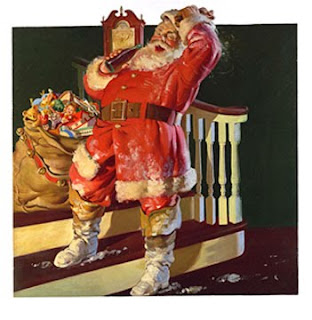 Quick, open the present! Santa's surprise is a brand new (old) public domain Christmas show that no one else has. Only me. Wow, what is it? Got your attention? We'll get to it shortly.
This column is mainly an ad. Buy my new Christmas DVD as a gift to your viewers. That's all. "A happy Christmas to all, and to all a good night!" says Santa at the end of "A Night Before Christmas." The end.
OK, I don't actually do ads in this blog. For specific "Buy this, it's good" ads, visit my website and check out the Festival Films/Café Roxy Christmas Programs. I only write here about films or projects that are new or of possible interest to others or have been consuming my week, and I try not to be boring.
This project started nine days ago when two active customers in Nevada wanted Christmas shows for local TV. They had shown the Beverly Hillbillies / Petticoat Junction X-mas shows last year and now wanted to get Scrooge, Santa Claus Conquers the Martians, A Christmas Without Snow, Christmas Cartoon Festival and a special 2-hour compilation of the best of TV Christmas shows. This last program of shorts I would make up fresh. They asked for the Burns and Allen Christmas show, which I have but only in poor quality. One of them summed up their desire in a way I could not have written better:
"My thoughts are, back as a little kid and being born in 1958 we used to watch black and white TV, of course. The big thing was shows had audiences and loved the Christmas specials by whom ever. We knew when there was a show coming up in November and specially in December it would be a Chhristmas show. I am trying to wear the past time travel helmet and I know this new generation would get a kick out of it as us parents recite back in those days! Oh man, I am getting old, lol. So now you know my thoughts gentlemen. Retro blast of the past to the way it was, and now you too know how it feels." 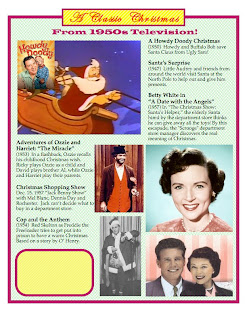 Of all the 1950s popular TV series, none had more Christmas shows than "The Adventures of Ozzie and Harriet" because they often worked in two each season as in "Boys' Christmas Money" (12/19/52) and "Late Christmas Gift" shown the next week of the first season on 12/26/1952. Season Two only had one X-Mas show -- "The Miracle" -- and this is the surprise I obtained recently and added to the new "Best of TV Christmas" show, as per line-up shown in the poster on the left (which anyone who buys the show can use to promote it in move theaters or on TV.) That's a plug, but try it, it works.

At first I had included the Captain Gallant Christmas show "The Boy Who Found Christmas" and called the program "Christmas Film Fun." Cuffy, played by Buster Crabbe's son in the series, runs away to find lost presents and during his adventure discovers the true meaning of Christmas. It's a good show and was the only "serious" episode among all the comedy, but a few days later it struck me (I'm slow) that few remember Captain Gallant while everyone loves Betty White. Her Christmas show, which I offered on another disc, is from her 1957 one-season series "A Date with the Angels." It concerns a department store Santa who gives away presents, thus thawing the heart of the Scrooge-like manager. So I replaced Betty for Buster and re-named the show "A Classic Christmas." You can even call it "A Classic Christmas with Betty White & Friends!" 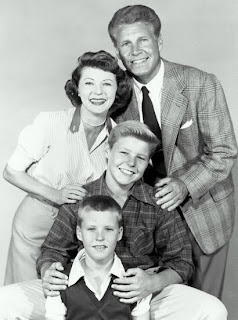 Back to the Ozzie rarity. "The Miracle" is not only a good Christmas show that has not been on the market in any DVD collections, it is unique in the entire series of over 400 shows. It's Christmas at the Nelsons, natch, and Ozzie brings home a merchant gift of a barometer that says it will snow soon. This recalls a memory leading to a flashback of when Ozzie was a kid in around 1915. Ricky plays Oz as a kid while David plays his older brother Al. Ozzie and Harriet play their parents. The miracle in both the past and present stories is that the father promises snow when it isn't supposed to. (Ozzie's barometer is a fake that never changes its reading.) Guess what? It snows anyway.


See all my other Christmas Programs.
Visit my website at Festival Films
Posted by Ron Hall at 8:17 AM