The Bride of Frankie Posters! 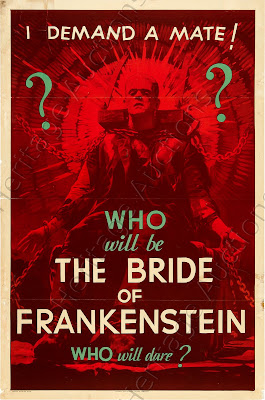 What will this poster sell for at auction on November 12? Follow the bidding and the suspense on the Heritage House auction site. 5,815 have already visited this page and two bidders have already placed their bids. If you would like to be the third, you better have half a million in your pocket.

Yes, a handful of movie posters rival the old masters in sales and future value, or at least that's buyer expectation. The Universal horror films will continue to rank at the very top. They have inspired so many kids over the years (me too!) and the gothic images are iconic, ultimate collectibles. People would pay to see these posters in museums, where many will end up if not already there. 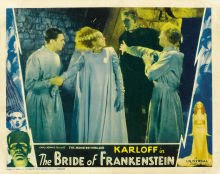 This Bride poster is the only one known to exist! Here is much more from the Heritage web page: "To a new world of gods and monsters." With that toast, Dr. Henry Frankenstein (Colin Clive) and Doctor Pretorius (Ernest Thesiger) begin the thrilling adventure of creating the mate for The Monster (Boris Karloff) in the critically acclaimed masterwork directed by James Whale, The Bride of Frankenstein, sequel to the smash hit from 1931, Frankenstein. Whale, insisting on complete control, delivered a triumphant sequel, surpassing it's original in almost every way, creating a sly and subversive work with its mix of dark humor, gothic horror, unspoken subtext and superb craftsmanship." 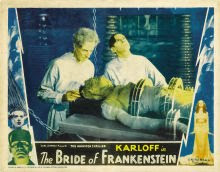 "Considered by many the greatest horror film of all time, The Bride of Frankenstein proved director James Whale's crowning achievement. Aside from cast members Clive and Karloff reprising their roles, the addition of Ernest Thesiger as the demented Dr. Pretorius and Elsa Lanchester in the dual roles of Mary Shelley (seen in the prologue) and obviously, as 'The Monster's Mate' proved a brilliant stroke of casting. Also contributing with excellent work was makeup genius Jack Pierce, luminous camerawork by John J. Mescall, stunning art direction by Charles D. Hall aided immeasurably by Kenneth Strickfadden's electrical lab equipment and design and of course, the extraordinary musical score composed by Franz Waxman. Such talent in front and behind the camera all helped to create a timeless classic selected in 1998 to be part of the National Film Registry, Library of Congress."

"Of the three one sheet designs originally produced for in-theatre promotion for The Bride of Frankenstein, this only known Teaser (Advance) poster boasts the most powerful image of the lot. With it's brilliant cherry red printing combined with the shocking image of The Monster in torn, burned clothing, shackled and chained to a heavy chair with rays of energy and light bursting behind, it simply does not get any better. The compelling tagline "I DEMAND A MATE" arguably provocative given the time, is further enhanced by challenging the reader with "WHO will be THE BRIDE OF FRANKENSTEIN" and "WHO will dare?"

This incredible Universal Horror one sheet from The Bride of Frankenstein, one of the most dramatic we have ever seen from any genre, from perhaps the greatest horror film of all time, is celebrating it's 75th Anniversary this year." 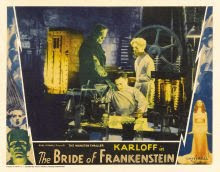 "Again, this is the only example of the Teaser one sheet from The Bride of Frankenstein ever to surface and after all these years, it's very likely there will never be another."

"The poster is unrestored with some border and interior pinholes, a few minor border chips and two clean tears that extend into the image, one at the top left and the other in the lower right. Paper tape supports both tears on verso as well as a tiny piece at each cross fold. The poster displays beautifully as is, or with the most minor restoration would present itself as virtually mint. The poster has been graded by MP Grading and the Certificate of Authenticity and Grading Document is included. From the collection of Todd Feiertag. Fine-. We invite everyone to come see this rare treasure in our Beverly Hills office. Estimate: $700,000 - $900,000."

The Bride of Frankenstein lobby cards displayed above were sold by Heritage House at prices of $8,365, $3,585 and $10,755, but are of course not the only ones in existence.

Visit my website at www.fesfilms.com.
Posted by Ron Hall at 10:03 AM