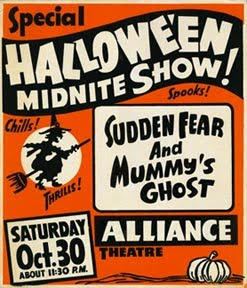 It's Halloween again, which brings back childhood memories of canvassing every single home in the small town of Deerfield, Wisconsin, or rather the houses with lights on, in the mid-1950s. The small town of 700 or so still had quite a few houses for an 8 year old with a pillow case to cover. I must have been under ten because the town soon initiated "parties" in the high school gym. I remember those as well, but without the darkness, the cold, the running from house to house and the heavy bag of candy by night's end.

I also recall with envy the newspaper ads for Halloween horror movies in nearby Madison, reprisals of Frankenstein/Dracula double features and who knows what else. The ads always looked great, likely better than the films if it was "I Was a Teenage Werewolf" meets "I Married a Monster from Outer Space." Similar horror midnight shows surfaced every Friday the 13th as well, but I never got to any because movie trips to Madison only took place during the day, and horror films were strictly taboo until I got into high school and could watch any films I could get to on my own. 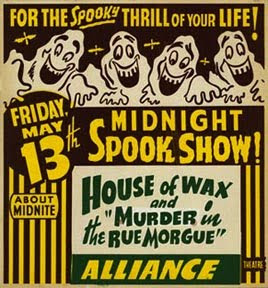 Horror film revivals were also featured from the 1930s through the mid-1960s in SPOOK SHOWS. After a chilling double feature, these live stage shows featured a magician and real, live, famous movie monsters who came into the audience when the lights blacked out. They were promoted (between the lines) to bring a date and sneak in some smooching between the screams.
You can read all about this lost era in "Ghost Masters" from Amazon.com. "This is a book that makes me want to don a gorilla suit and rip apart a blonde with my bare claws. It's a true history of my artistic idols: the mad doctors and maniacal magicians who toured with live midnight fright shows, and scared the bejeezus out of hormone-pumped teenagers on dates. In my opinion, an absolute must-read for horror and magic fans." --Teller of Penn & Teller

Some fun movie posters like the two above can be viewed Here. 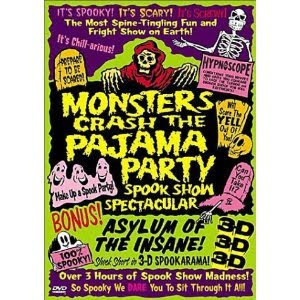 There's a wonderful video compilation about these shows called Monsters Crash the Pajama Party. "Grab the kids, lower the lights, and turn every night into Halloween with the Monsters Crash the Pajama Party Spook Show Spectacular! It's a Spookaroo Whoop-de-doo with this Terrorific 3-hour-plus Spooktacular containing everything you need for your very own Spook Party! First, join some terrified teens who spend a night in a haunted house and get spooked by a mad doctor and his ghoulish gang when the Monsters Crash the Pajama Party, a hilarious 1965 theatrical featurette complete with werewolf, gorilla in a fur coat, and goofy gimmick! Then, feel your eyes pop out of their sockets when you check into The Asylum of the Insane, a startling short subject with monsters in 3-D Spookarama (3-D glasses included)! But that's not all! This scary, screwy, chill-arious fright show includes bonus shorts, Spook Show previews, audio commentaries, How to Put on Your Own Spook Show, music by The Dead Elvi, and much more--plus the bonus feature-length chiller-diller Tormented!"
My family moved to Madison in time for me to attend high school. I could see lots more movies in theaters, about anything I wanted as the bus trips were short and direct, and yes, I caught one of the last Spook Shows. Anticipation high; packed theater; hopes dashed. I can't remember the double feature for starters, so likely no monsters -- maybe some British film like "Burn, Witch, Burn!" The stage show was a hypnotist who took volunteers from the audience. This went on forever. Only one teenage boy really went under, ha-ha, a plant and the climax of the act was when his pants came off! Then Frankenstein's monster came onstage, the theater went pitch black, lots of screaming, houselights on and go home. Mainly I remember the disappointment. In retrospect, no wonder -- I did not have a date to make out with! 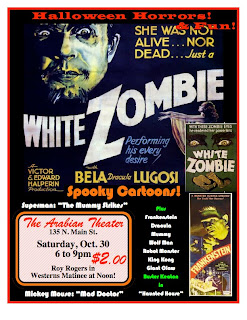 I had not thought about my Spook Show experience in quite awhile, not until today. I realize it may be behind my desire to show young people a good time with the old horror films in a theater. I got the chance this past week when a new customer, the Arabian Theater in Alabama, asked for a horror show for next Saturday, Oct. 30. Since Halloween proper is on Sunday this year, Saturday is the best day for a film show. After some discussion, we settled on a 3 to 3 1/2 hour show from 6 to 9:30 pm or so that kids could come or go to throughout the evening. I came up with a two-disc show. The second part is "White Zombie" which is genuinely spooky with lots of zombie monsters but no blood or brain-eating. Moody but a bit slow, which is OK since if anyone doesn't get into it and leaves in the middle they will have already seen 90 minutes of cartoons and classic monster trailers. 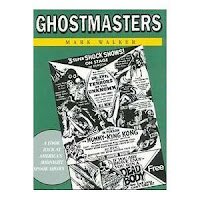 The first half of the show contains:
Sure-Locked Homes -- Felix the Cat, 1928
The Mechanical Man -- Oswald Rabbit, 1932
Is My Palm Read? -- Betty Boop, 1933
Gypped in Egypt -- Tom & Jerry, 1930
Superman Cartoons -- Underground World & The Mummy Strikes for a little color.
The Mad Doctor -- Walt Disney Mickey Mouse, 1933
The cartoons are interspersed with horror trailers for: Robot Monster, White Zombie, The Giant Claw, King Kong, Dracula, Frankenstein and others, plus Buster Keaton in “The Haunted House” (1921). The Keaton short is not spooky, but is a perfect chance to expose kids to silent comedy. I suspect it will be the big hit of the evening!


Visit my website at www.fesfilms.com.
Posted by Ron Hall at 9:12 AM