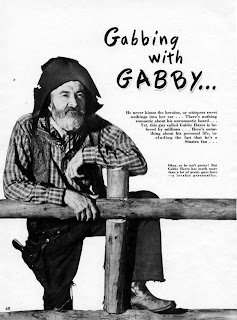 Well, pards, Gabby Hayes has been on my mind the last few weeks, as expressed in recent entries.

First I created a Gabby Hayes DVD that contains two episodes of "The Gabby Hayes Show" and his feature with Roy Rogers - Southward Ho! I haven't advertised it, I haven't been asked for it and I haven't sold one yet. I just made up the disc and DVD jacket. In the first TV show Gabby tells how his ancestor Bullwhip Hayes whipped boulders into Pike’s Peak. The exciting western that follows features Tex Riter and Dave O’Brien as Texas Rangers. In the second episode Gabby tells how Uncle Flapjack Hayes created the first flying saucers. Then Hoot Gibson rides into action against cattle rustlers.

Southward Ho! (1939) is one of Roy's early "historical" westerns set in the old west, as opposed to most of his later films set in the present (i.e. 1940s). In post Civil War Texas a former Union officer is the government's chief law enforcement official and tax collector. Roy discovers that the man is also the head of an outlaw gang. Gabby is head sidekick #1 through every scene except the love making. 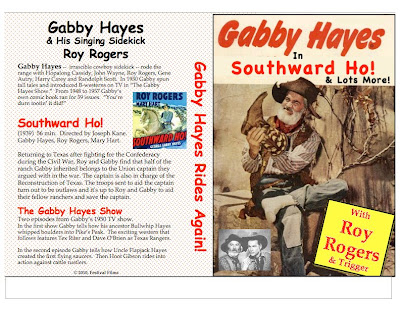 Next I won the lobby card from Night Rider with Harry Carey, or stole it for only $6. That seemed a steal to me, or is it a sign of the decline of interest in B-westerns. Just scroll down to last week's notes to see the card. As far as I know, it is the earliest known lobby card or poster to display George Hayes in his soon-to-be Gabby character. A good western expert might be able to pull out other posters, but the only earlier Gabby I have seen is Hidden Valley starring Bob Steele, in which Mr. Hayes plays the 4th heavy as an extra.

A better role for Gabby than the one in Night Rider is as Dude Saunders in Border Devils, both in 1932 and both with Harry Carey. I feel this is the earliest prototype of the bewhiskered "Gabby" codger with a sense of humor and the ability to make us laugh. See if you agree. I put together a little highlight reel from this film and posted it on Youtube, which means you can watch Gabby & Harry right now! 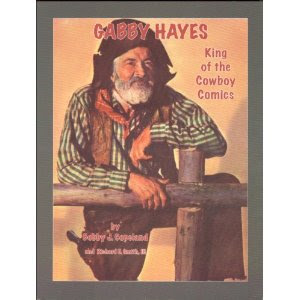 Struck by Gabby Mania, I finally bought the book by Bobby J. Copeland and Richard B. Smith, III -- "Gabby Hayes, King of the Cowboy Comics" from Amazon.com for $20. Since it came Thursday, I haven't had a chance to read much, but I recommend it for all the Gabby talk. The earliest photos are with Hoppy in 1935, and they don't even mention Border Devils other than the filmography where they call his character Duke instead of Dude, so maybe the authors never even saw it!

Go have yourself a Gabby old time! Watch my video, buy the book, buy the DVD and spread the word. Do it ya' young whippersnapper!


Visit my website at www.fesfilms.com.
Posted by Ron Hall at 4:55 PM