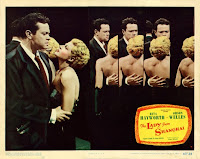 I have become an avid follower of the 3 weekly auctions at Bruce Hershenson's emovieposter.com auction site. I enjoy browsing the hundreds of movie posters and related material put up for sale each week, finding images I have never seen before and lots of bargains. I bid on occasion, and a few weeks ago won reissue press books for Hitchcock's The 39 Steps and Tarzan Escapes.

The top posters still fetch high prices. Interestingly (to me only), I had auctioned this Lady from Shanghai lobby card in early August and it went for $901, while another identical one sold this past week for $854. Emovieposter.com has over 7,600 registered bidders, all of whom are movie fans and most of whom check in weekly to see which of their special wants or interests might be on the block. Around 2,000 items are auctioned weekly, so many sell for under $5.00. This is truly a great time for acquiring rare posters at low prices and I encourage all movie fans to check out the site. 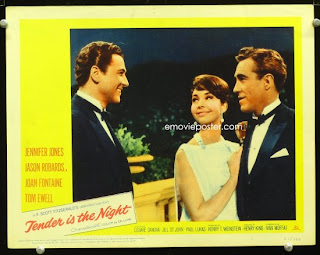 The 1962 Jason Robards Sr./Jennifer Jones film Tender is the Night is a joke in my household. My wife, her brother and sister discuss it endlessly as an atrociously BAD, yet interesting, film from an F. Scott Fitzgerald novel, and sometimes they even watch it together to ridicule the acting. We have taped versions off TCM over the years that are flat and letterboxed and once they even showed a longer, uncut version. Imagine that excitement! Anyways, I found this lobby card up for auction last week and thought I would buy it as a joke gift at Christmas, giving it to all 3 relatives in order, none of whom would really want it.

So I put in a bid for $5.00. Each buyer of any poster in the Thursday all-lobby card auction would also receive a free poster book of "John Wayne Posters," a $20 value. Shipping was an additional $10, but it still seemed like a good deal. It was indeed a very good deal if I got the poster real cheap. However, a few days later the idea crept into my head that the shipping charge would cover any number of posters, so I looked at every lobby card and put $5 bids on 20 more. I knew that $5 was way too low on the 3 that eventually sold for $46, $58 and $95. I did raise my bid on a few and ended up winning 7 posters: 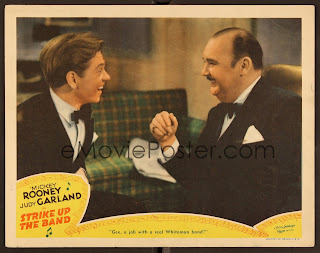 2 lobby cards from The Joe Louis Story (one would have been enough) cost me $3 and $2. I bid because it is a public domain film. That's why I bid on 2 cards for Tulsa with Susan Hayward. The better one went to someone else for $10; I paid $5. The Adventures of Gallant Bess (public domain film) cost me $5. Outrages of the Orient is a public domain exploitation film that I had recently sold to Alpha Video. While I don't need the poster for anything in particular, I have a 16mm print and now have the poster for only $13. I bought Strike Up the Band as a Christmas present for a Paul Whiteman fan for $13. I don't think Paul is featured on many posters. 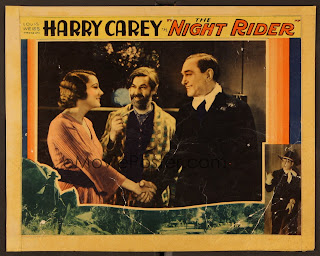 The last one I never thought I would get but am most happy that I did. I had seen the film The Night Rider in the past year and thought it was the very best early performance I had seen by George "Gabby" Hayes. I like Harry Carey a lot and watch as many of his films as I can. There is real chemistry between the two, and some good comic exchanges when George keeps calling the older Harry "Young feller." I should put some clips up on Youtube, now that I think of it. I bid $10 initially on the lobby card and got it for a mere $6. Anyone writing a book on Gabby, contact me....

I have consigned six minor items to emovieposter.com and will comment on them later. Two of them should appear in the Tuesday auction: 4 lobby cards from Last Year at Marienbad and the 8 lobby card set from the 1954 reissue of Dead End. Even though they are reissue cards, the first screen appearance of the Dead End Kids, and with Humphrey Bogart as well, should do well at auction. The other major, weekly auctioner of movie posters -- Heritage Auction Galleries -- sold 2 of these cards in 2006 for $431! I doubt I get close to that for all 8, but we'll see.

And what about that Tender is the Night lobby card? I forgot about the auction on the evening it was closing and someone else outbid me at the last minute and got it for $6! I would have gone as high as $8.


Visit my website at www.fesfilms.com.
Posted by Ron Hall at 8:28 AM