My Website gets over 90 hits a day and 78% are new visitors. This seems huge because I am oriented to selling movies that are in the public domain. Rabid movie fans are welcome, but they generally don't care if a film is in the public domain, they are just looking for rare films or their favorites. As someone wrote me this week, "I have been collecting the Laramie episodes for 35 years, and am looking for the few I don't have." I don't have any Laramie because they are all copyrighted, but that's an example of the earnest collector I usually do NOT get.

Of the many who visit my site thru links or googling Public Domain Films, a few do contact me each week and usually with specific uses in mind for public domain films like showing them on their TV station or in their movie theater. A few have unusual ideas.

Check out Old School Horror website to watch a horror film every Saturday late night with two Horror Hosts harking back to the 1950s "Shock Theater" that played in most cities with local hosts. A new show debuts every Saturday night, but is then archived so you can watch it anytime, forever. The Dead never sleep. They will soon be adding the Boris Karloff TV show "The Veil." 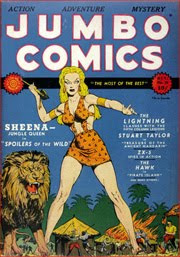 Walking Shadows is another horror website showing films and selling films, some of which are their own releases. The DVD boxes are well designed and have appealing bonuses. I can vouch for the quality and contents of Reefer Madness, which includes the second dope film Marijuana and some weed shorts I have not seen before. The big challenge to any website is to attract traffic. It can be done. Good luck!

Rodeo TV on the Internet. Coming soon to your own computer. I just googled Rodeo TV and found 3 or 4 sites already operating. The one I am working with has big plans like connecting horse and steer owners with rodeos who need a large yearly supply. They plan to host a live hour Rodeo show every week and then archive them. They want to offer B-westerns and TV shows on the site as well to attract people back or give them more to do once they are there. I was surprised to hear there is a large audience for all things rodeo.

Saturday Matinee Website, again coming soon. In preparation for over a year now, this ambitious site will revive interest in the Saturday Matinee with hundreds of hours of programming. 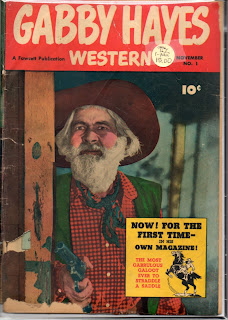 Comic book videos in comic book stores. A long-time wholesaler with a link to comic book stores plans a new line of DVDs with comic connections, to be sold in comic book stores which currently do not sell DVDs. While the Max Fleischer Superman cartoons are easy to buy online, a young comic fan may not know this and buy a $5 DVD when he is in the store. I suggested Sheena, Queen of the Jungle and just put one of her comic book covers on the DVD case. TV Sheena's Irish McCalla does not disappoint in the scantily clad department.

Brainstorming, I pointed out that all the cowboy stars had their own comic books in the 1950s, but rather than offering Roy Rogers, etc., why not try Gabby Hayes? Once you get going in a local comic store, I said, try putting a few Gabby Hayes DVDs out for sale to test interest. Gabby had 59 comic books from 1948 to 1957. Hence I found the comic book here, which is the start of a DVD cover.

Others come to me with vague ideas about wanting to do something with public domain films. I advise them to think outside the box and find new ways to market or new audiences to market to. You can't sell to Walmart no matter how nifty your packaging is because others have cornered that market long ago and the prices are too low anyway. So think. I have lots of ideas to get you started. Next time.


Visit my website at Festival Films.
Posted by Ron Hall at 8:57 AM