I have a YouTube channel and post occasional videos with links from this blog or from my Festival Films Website.. Last week I talked about the First Buck Rogers film and so could post a link to It's very useful to be able to talk about movies and show them at the same time. Duhh, makes sense. In the last few days I have posted 4 films that link to archived blog posts for Matinee at the Bijou. You can go watch the videos I am about to discuss and then read the blogs. Argggh! It's talk like a pirate day, so Arrr, why do you need me when I'm just sending you elsewhere?!

While you are going elsewhere... that's mutiny, me maties... check out Movie Unlimited's Movie Fanfare daily blog about new news about old movies. Movie Fanfare has reprinted a number of the older Bijou blogs, including the ones that I posted videos for.

A Bijou Flashback: Remembering Will Rogers
The life and film career of legendary actor Will Rogers is remembered. I love the Will Rogers features from Fox in the early 1930s up to his untimely death. Judge Priest is one of the best, directed by John Ford, and also is the only one in the public domain. However, we enriched the Bijou article with a complete 2-reel Rogers comedy from 1924: Big Moments from Little Pictures. Will lampoons films of the day and stars like Fairbanks and Valentino. Why sit through the whole thing when there is only one good scene? You can watch the first half of Big Moments HERE, and then PART 2.

A Bijou Flashback: Forgotten Hollywood Treasures
Guest contributor Bob Campbell writes: Where on television today can you find short subjects starring Betty Boop, Laurel & Hardy, Our Gang or Flash Gordon? The short posted that you can view here is Star Reporter in Hollywood from 1936, that consists of 3 screen tests -- a young boy that never made it singing opera, a dance duo .. if you want to know who they are, go watch the film, cause I don't recall ... and then a long song by Dorothy Lamour in a glamorous dress and setting, miles from her sarong debut films. Well worth a look-see, and a link from the video will direct you to the article. 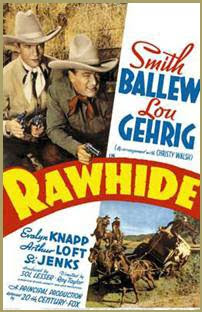 A Bijou Flashback: The Three Faces of Cowboy Star Tom Keene
Guest contributors Bob Campbell and Victoria Balloon write: Under the old studio system movie moguls groomed promising new stars by first creating for them ... Read the entire article after viewing an extended clip from Our Daily Bread. Tom Starred in this major depression era classic directed by King Vidor, as well as the star of a series of B-westerns through the 1930s and 40s, plus ... well, read the article.

Lou Gehrig Rides Again: Baseball Legend to Movie Star
Believe it or not, baseball great Lou Gehrig made one movie in 1938, a B-western in which he co-starred with obscure singing cowboy Smith Ballew. You can watch all the highlights right here, then link from the video page to the blog discussion. This is becoming a worn record stuck in a groove, but who's reading this far anyways! Arrgh! Go watch Lou, Tom, Will & Dorothy!

Visit my website at Festival Films.
Posted by Ron Hall at 10:21 AM