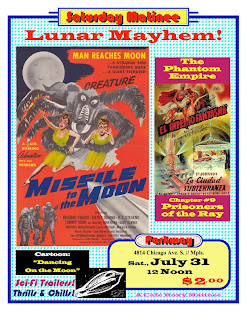 Missile to the Moon is the featured attraction for installment #9 of the Saturday Matinee Series #3 at the Parkway Theater in south Minneapolis. Needless to remind, this series is available for anyone to show in their movie theater or as a 12-part TV series. One of the regulars commented about Missile on Facebook: "This was one of the few "bad" SF movies from the 50's that I hadn't seen yet (or, if I did, I had completely blocked it from my memory). Man, what a stinker! But it was still worth watching." He also added that no one walked out! The film is also in the Roxy "Turkeys in Space" series. I put the highlights into the trailer that appeared in the previous week's Matinee, and those highlights are 1) A moon woman hypnotizing the hero, 2) A giant spider attack, and 3) Brief glimpse of the Rock Men threatening one of the teenagers who is about to expire due to greed and the script.

The shorts were at least entertaining. "Dancing on the Moon" is a Max Fleischer color classic about a nightly honeymoon flight to the moon on board a rocket ship. The passengers are pairs of animals -- 2 bears, giraffes, elephants, etc. Mr. Cat screws up and gets left behind while his new bride goes lunar by herself. Naturally she returns to earth fuming and the stork does NOT bestow on them a blessed event. All the other animals get stork-delivered babies but the cat stork only lands and shakes his head. Also featured were trailers to "Abbott and Costello Go to Mars," "Earth Vs. the Flying Saucers" and other vintage 1950s Sci-Fi. 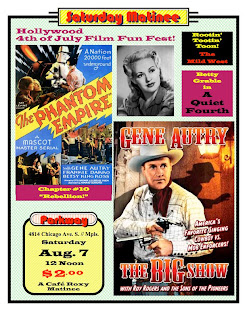 Program 10 was all Gene Autry, what with the serial chapter from the Phantom Empire and his best film from the 1930s, The Big Show, which I feel can be enjoyed by non-western fans because it is a contemporary film about Hollywood and fame. Gene plays two roles, the first as a haughty cowboy star making B-movies for a Republic studio look-alike. He also plays the amiable stunt man for the star who can ride, fight and sing. When the prima donna takes a walk, Gene is enlisted by the studio to impersonate him at the Texas Centennial celebration. Spectacle scenes were actually filmed at the Centennial, and are fascinating for preserving that history. Lots of music and guest groups. In one scene these four stars appear together: Gene Autry, Smiley Burnette, Roy Rogers as one of the Sons of the Pioneers, and 3 Mesquiteers ventriloquist Max Terhune. 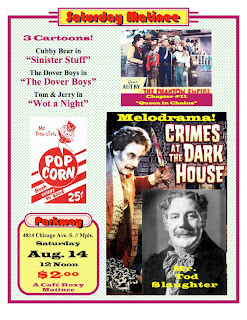 Many of the Matinee programs are not really aimed at kids and are not true recreations of the Saturday Matinee Experience. I aim for variety and to entertain the older audience that just enjoys following the serial, cartoons and seeing vintage films in a movie theater. Hence I took a chance and featured Tod Slaughter in program #11 -- Crimes At the Dark House (1940). A madman kills a man who has just inherited a large estate, then impersonates his victim to gain entrance to the estate so he can murder his enemies. Mr. Slaughter portrays a Victorian villain out of an old-fashioned melodrama, that I find delightfully tongue-in-cheek. In the first scene he puts a chisel to the head of the sleeping villain and pounds away. The cartoons feature this kind of stereotype villain in Chukc Jones' The Dover Boys and Cubby Bear in Sinister Stuff. I got the idea to include this film when Johnny Legend told me he saw Tod Slaughter films as a kid in Hollywood at matinees and also when I acquired a better video master. 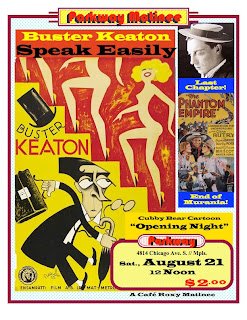 The Matinee series closes out with Buster Keaton in Speak Easily (1932). Naive, bookish Professor Post (of Potts College) inherits a huge amount of money and decides that now he can afford to go out and enjoy life. He falls for a dancer in a bad stage show, and with his new money decides to buy the show and take it to Broadway. Will the Professor prove too nice to succeed in show business? Or will he triumph over bill-collectors, critics, and sexy vamp Eleanor Espere? The MGM features that Keaton made with Jimmy Durante are universally despised by Buster's fans, but I kind of like it. How bad can it be with Thelma Todd and Sidney Toler in the supporting cast? In a great scene, Buster gets trapped onstage during the musical he financed and his unwitting blunders add the needed comedy that saves the show.

Plus the final chapter of The Phantom Empire in which the underground super-city of Murania melts into nothingness. The melting scenes totally astounded audiences of the time and are still impressive in their "special effects," as in how the heck did they do that.


Visit my website at Festival Films.
Posted by Ron Hall at 8:17 AM