Emovieposter.com broke their big Mini/Major auction into 3 parts. My six lobby cards were in part 1 that ended Tuesday evening. Here is a link to all of the posters with final prices. I believe the Babe Ruth insert poster fetched the most at $9,700, likely because of the cross over interest to baseball fans.

Certainly there were bidders out there willing to spend money. My six lobby cards eventually sold at respectable prices in the ballpark to what identical posters had gone for in past auctions. My thanks to "crowzilla" (bidding name) whoever you are for taking my 3 most expensive cards for a total of $2,026! I wish I knew how much higher you would have gone if the runner ups had increased their bids. The Lady from Shanghai card went for the most, as I predicted, at $901. Notorious sold for $713 and Suspicion for $412, all to Mr. crowzilla. Suspicion was the biggest surprise since I don't think it's all that great an image and the most it had sold for in previous auctions was $485.

I thought Shadow of a Doubt would sell for more than $310. Haunted House with the great close-up of Thelma Todd went for $408 and the lowest seller was The First Kiss at $171. I suspect "Kiss" will go up in the future since it seems to be the only known lobby card with Gary Cooper and the ever-popular Fay Wray. All of these posters are pictured in last week's blog entry.

In total my posters sold for $2,900. I feel good about selling them now at sizable prices, and would have been disappointed if they sold for half of that. The auction house keeps around 25% so I should get a check in the $2,200 range in about 6 weeks. They still need to collect the money and ship the posters. They deserve that much commission since I could never have found buyers with money and I don't trust auctioning myself on ebay. 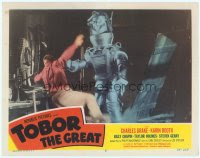 I placed a few bids myself in this auction, namely on this lobby card for Tobor the Great which I was considering as a Christmas present. It did not have many early bidders, although it once sold for $175 at auction. I bid $45 and it sold for $73. I don't regret not getting it.

Will I auction more through emovieposters.com? I think so, yes. Wish I had comparable material.

See my public domain catalog and Café Roxy programs for movie theaters, etc. at Festival Films
Posted by Ron Hall at 8:40 AM