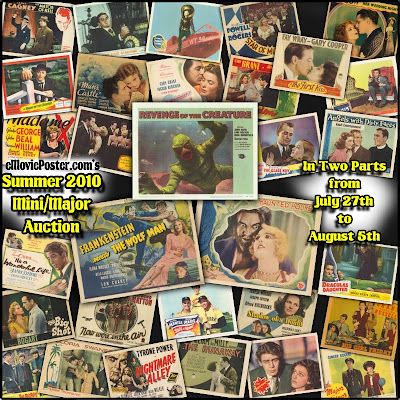 I submitted six rare lobby cards to Bruce Hershenson's summer Mini/Major Auction at emovieposter.com. They can all be spotted in the above collage of 32 lobby cards featured in the auction. Click on the photo to view larger size. Bruce holds 3 poster auctions every week, but four times a year a special Mini/Major auction only sells top quality rare posters. These auctions get more publicity thru weekly email newsletters to over 6,000 collectors. I suspect every major poster collector in the world checks in to see what is offered.

I thought the timing might be right to sell some prizes that have languished in a box for twenty years or more, but the economy is slow and so many great posters are being auctioned that I may be disappointed. There is no minimum bid, so a poster that sold five years ago for $700 might go for $250 or less. But now may be a better time to sell than six months from now if and when large poster collections are dumped on the open market so the owners can make ends meet. This page link shows 5 of my posters. I don't know how long the page will be up after the auction. 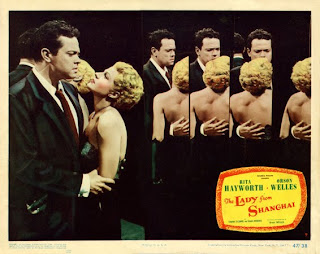 This brings up the larger question of whether movie posters are good investments in the long run. (I don't know beans about it, but can speculate.) Perhaps not for posters that are mainly of interest to fans of a particular star or genre. Years ago a friend found a small stack of Buck Jones lobby cards in an antique store, bought them for around $75 and re-sold to a western dealer for $900, and then that dealer made money because he knew multiple Buck Jones collectors. How many of them are left? What would those lobby cards sell for today no matter how rare?

Certainly the cream of the crop posters of classic films, horror & sci-fi films, Disney animation, etc., will only increase in value. That's what I hope I put up for sale. The Lady From Shanghai lobby card may fetch the most because it is an iconic image featuring two undying legends, Orson Welles and Rita Hayworth. The hall of mirrors epitomizes the shadowy ambiguity of the film noir underworld. This is the only American poster image of that scene, and the lobby card is fairly rare because emovieposter.com has never auctioned this one before. Heritage House Auction Galleries sold one in 2006 for $956, several other copies and finally one in 2008 for $2,868! Final sale price can depend on condition, but mainly whether several people want it! Will it soar in value in the next ten years? I don't know what to expect, but I'll venture mine sells in the $650 range. As of Friday morning $417 has been bid via 15 bids so the interest is surely there. The auction ends Tuesday night. 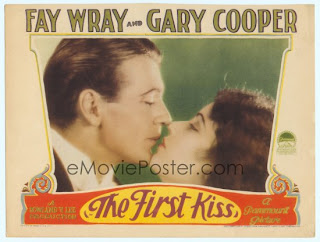 The second lobby card is from the lost 1928 film The First Kiss starring Gary Cooper and Fay Wray. Both stars are still famous and appealing and Fay Wray has a cult following from King Kong. It's a passionate image illustrating the title of the film, and may be the only known copy in the world because I could not find the poster anywhere on the Internet. However, it has not been auctioned before to my knowledge so there is no reference price. All I need are two Fay Wray fans bidding against each other to get a good price. Auctions are funny that way or so I hear. So far it is up to $35 bid, but by 7 bidders so there is hope of a high price. 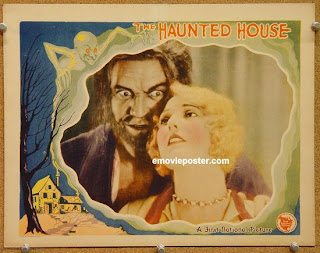 Next up is another lost, silent film from 1928: The Haunted House. Emovieposter sold one in 2005 for $787. It certainly falls in the evergreen horror genre, and the girl being menaced by Montagu Love is cult figure Thelma Todd who has a huge following. Currently at $155 with only 2 bidders. Someone may get a bargain.

The last three lobby cards are all from Alfred Hitchcock films of the 1940s -- title cards (meaning the main one) from Notorious and Shadow of a Doubt, and the glass of milk card from Suspicion. Emovieposter sold the Notorious card in 2007 for $1,316. (Currently 8 bids; $220) The one pictured here is a scan of my actual poster and shows off the slight discoloration due to the natural age. They sold a Shadow of a Doubt lobby card exactly like mine in 2007 for $667 (currently 5 bids; $140) and a Suspicion (currently 9 bids; $166) in 2007 for $485.

Since I only paid about $10 each over 20 years ago, my investment in lobby cards I spotted at the Syracuse Cinefest and could not walk away from was certainly a wise decision. With over 4 days to go, indications are that Lady From Shanghai could skyrocket. The others, who knows? Many bidders wait until the last moment to put in their high bid, so that the previous high bidder will not have time to reconsider if he wants to go even higher. 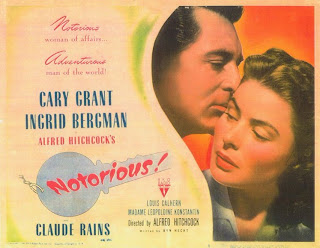 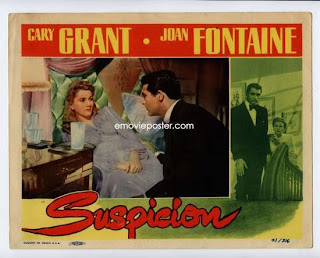 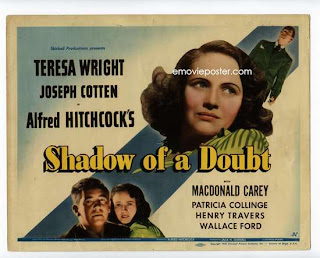 Visit my website at Festival Films
Posted by Ron Hall at 8:16 AM