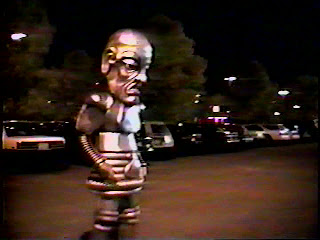 In 1994 my family (me, wife Chris, son Jeff and brother-in-law Scott Johnson) decided to attend the Mystery Science Theater 3000 convention. The show was produced in the Twin Cities and we were fans at the tail end of the Joel Hodgson era. Actually Joel had just left the show and did not attend the convention, but Trace Beaulieu, TV's Frank Coniff, Jim Mallon, Kevin Murphy and Mike Anderson were there plus special guests like Kim Cattrall and Beverly Garland. The convention was held in a Raddison hotel in a southern suburb about 20 minutes from our home. We attended a Friday panel discussion, MST3K live show in a theater and the Saturday night party.

It was a costume party to come as your favorite character from any movie lampooned on the show. There were two costume categories to enter: 1) Torgo from Manos, the Hands of Fate (1966) and 2) Non-Torgo. Jeff and Scott went as Torgo, and can be briefly glimpsed in the video you will watch after reading this. Torgo wears rags and a tattered hat, has a padded, gimpy leg and lurches about on a cane stuttering the way Torgo talks, of course. There must have been 50 Torgos at the party; they invited a dozen or so on stage to do their walk & talk like Torgo all at the same time.

Because we knew several months ahead that we would attend, I had too much time to work on my costume. As you have already guessed from the picture, I built a robot costume like the one in the Bela Lugosi serial The Phantom Creeps. It took about two months to build. The head was sculpted in clay and cast in fiberglass, a skill I had picked up building props at the Guthrie Theater for ten years. In retrospect I built the head way too big, considerably bigger than the serial robot head. I started building so I could peak through the mouth and the rest followed. It was probably a more effective costume being too large, since I am only average build at six foot tall and the big head pushed it well above 7 feet. 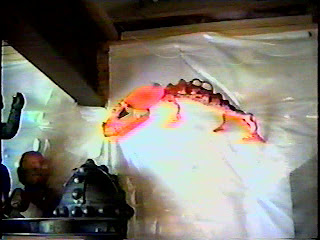 So about 10:30 on Saturday night, Sept. 17, we got to the hotel for the "Glittering Costume Ball." I unpacked the robot pieces and put them on in the parking lot. Chris had the camcorder and filmed my famous walk as "Robot in a Parking Lot" for the ages. The robot walks into the party, turns around in a confused daze and then... that was all we got on film. Afterward Chris said "The camera just cut off and I couldn't get it going again," or something similar. All I remember is sweating like a watermelon, going outside for a break and taking the head off, then back in. Hey, I won first prize! Second prize went to a woman who wore a laboratory table and went as The Brain That Wouldn't Die. My prize was a Devil Dog prop pictured here that was used in some MST3K sketch. They had a stage about five feet off the ground and I recall almost tripping as I walked down it after getting the prize. On Monday a photo of the robot appeared in the New York Times. Someday I'll find that photo in some box!

So we only got one minute of footage at the convention ( and one minute of national fame) but we also filmed several minutes at home a few days before with some ominous music playing and Jeff filming the embarrassment with a shaky camera. I didn't look at the footage for years, but suddenly everything we had shot 16 years ago came in handy. 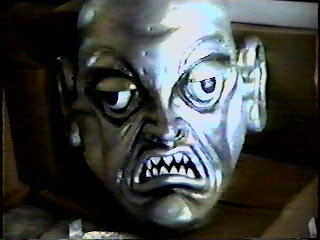 I got an email and had a few discussions with Nick Villa who has a website called Old School Horror. His idea is to make public domain horror films available for online streaming/viewing with the twist that they will be introduced by a horror host like Count Dracula. Horror hosting has been done on TV since the 1950s, but not on the Internet. Our discussion was how Festival Films might fit into his plans and I gave him some copyright advice. Nick mentioned he would be happy to give a link to my site.

This got me wondering why any normal person would want to visit my site since it is geared toward TV stations, movie theaters, video companies, etc., who are intentionally seeking public domain films. The answer was to create a page that anyone could go to for a few minutes entertainment, then investigate my others pages if interested. Public domain showings can be used by anyone at all, even if they had never considered doing so. Hence the video and web page P.D. Robot Vs. Federal Agent was created. I cut my robot footage into scenes from the Bela Lugosi serial, a project in the back of my mind for some time. In the process I gave my robot the name of "P.D. (for Public Domain) Robot," and a whimsical plot evolved! P.D. fights for Freedom of Usage as he conquers the evil Federal Agent and flees from the army. Then there is a surprise ending. So go watch it and enjoy.

Anyone out there with a website, please link to the P.D. Robot page!

Visit my website at Festival Films
Posted by Ron Hall at 8:10 AM