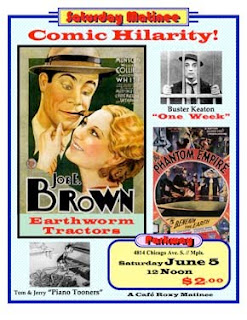 We are already up to week #5 at the Parkway's Saturday Matinee series. You can see how the Parkway Theater promotes Saturday Matinee on their website along with their regular shows. This totally independent theater is a home to first and second run movies, occasional revivals like a successful 3-D festival a year ago and live stage events. Last night liberal talk show host Ed Schultz appeared for a town hall discussion and book signing, and upcoming is local comedian Scott Hansen on June 26. While checking their site just now I noticed that next week's Matinee is being bounced back a week for who knows why or what. That's not a good way to build an audience, needless to say, but at least this time they are announcing it a week ahead.

They keep telling me that everyone loves the Matinees and they want to keep going, so it is time to plan a line-up for Series #4. I will use the serial Zorro's Fighting Legion and already put a trailer for it in the last episode of Matinee #4. It was standard procedure for theaters to run both the last chapter of one serial and the first chapter of their next serial in the same program. This just occurred to me, too late to do it now since Buster Keaton in Speak Easily is scheduled in. What I would need is a short one-hour feature like a western or The Vampire Bat to be in the 12th spot. Then I would need to seriously consider if my audience wants that much serial at a time. I doubt it, and suspect the trailer is enough. 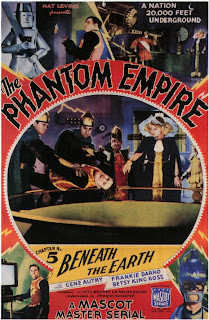 Continuing side comment... the film companies spent an exceptional amount of time and money promoting the hell out of their serials, probably because they were relatively inexpensive and yet primarily responsible for filling the theaters every Saturday afternoon. Many coming attraction trailers for serials run as long as five minutes, proof of which is this trailer for The Phantom Empire. Another way the producers splurged was to produce a distinctive one-sheet poster for every single episode. The poster would be displayed in the lobby all week, then moved to the poster area by the box office for the Saturday show. A good example is the poster for chapter #5 of Phantom Empire. Note the chapter title and number and exciting sci-fi action scene that promises to be in it. If the scene fails to appear, the cashier will hear about it as the boisterous young boys exit.

I pick the Matinee films based on variety of genres, entertainment value today and quality of the material I can find. Crimes in the Dark House was only added after I got a better quality film, which upon re-watching I realized was even more entertaining. I am considering these features: Hook, Line and Sinker with Wheeler and Woolsey, The Vampire Bat, Man in the Attic, another Bulldog Drummond, another Roy Rogers and new programs of Saturday Morning TV and Silent Comedy.

Joe E. Brown in Earthworm Tractors is playing today at the Parkway. Alexander Botts is a self-described natural born salesman and master mechanic, who is trying to make a big sale of Earthworm tractors to grouchy lumberman Johnson. Since Botts doesn't really know anything about tractors, and since the old-fashioned Johnson is opposed to tractors of any kind, it isn't going to be an easy sell. But Botts perseveres, encouraged by Johnson's daughter. Guy Kibbee enlivens the show as the old guy Botts must sell tractors to. A good slapstick scene of the tractor running amuck is still highly amusing. And, NO, that poster above is not from Earthworm Tractors but rather from a 1931 film Broad Minded with Joe, Thelma Todd and Bela Lugosi. I could not find the right poster to incorporate into my poster, so I took the best I could find. Also on the program is the excellent Buster Keaton short One Week, in which Buster and his new wife put up a pre-fabricated house on their own, except the plans have been altered by a jealous rival. 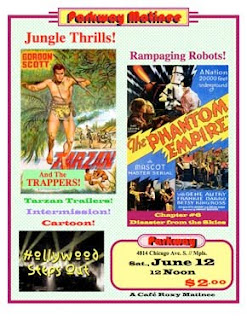 Matinee Week #6 features Gordon Scott as Tarzan in Tarzan and the Trappers. Upon recent review, I feel this is a pretty good Tarzan film that carries on the MGM concept of Tarzan, Jane, Boy and Cheeta living in a tree house. New actors in old roles, and possibly the same Cheeta??? Tarzan still stutters along in broken English. It's got jungle and animals and bad guys and moves along quickly so what more can you ask or a Tarzan adventure? Maybe a sharper looking video copy.... The highlight will probably be the trailers to the first 3 MGM Tarzans with Johnny Weismuller: Tarzan the Ape Man, Tarzan and His Mate and Tarzan Escapes. It has been established in legal cases that coming attraction trailers were unique films that needed to be copyrighted/registered as entities separate from the feature films, and then renewed 28 years later. Of course, back then no one knew this and so few trailers for films before 1970 (picking a random year) were ever copyrighted. Studios wanted their films advertised; that advertising in the form of preview trailers survives today and may even still work. Catch a preview of Tarzan and His Mate at my Matinee, then go get it from Amazon.com or netflix. 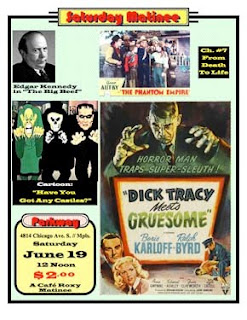 Dick Tracy Meets Gruesome has everything you want in a fast and compelling B-film. A gang of criminals, which includes a piano player and an imposing former convict known as 'Gruesome', has found out about a scientist's secret formula for a gas that temporarily paralyzes anyone who breathes it. When Gruesome accidentally inhales some of the gas and passes out, the police think he is dead and take him to the morgue, where he later revives and escapes. This puzzling incident attracts the interest of Dick Tracy, especially when the criminals later use the gas to rob a bank. The main star is the villain -- Gruesome -- played by Boris Karloff. Ralph Byrd was everyone's screen Tracy due to his starring role in 4 big-budgeted, smash hit, 15-chapter Dick Tracy serials for Republic. He went on to play Dick in one season of ultra low budgeted Dick Tracy TV episodes (1950-53) but then died at the early age of 43 from a heart condition. 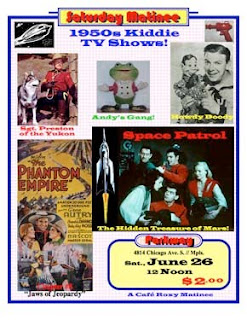 Last up to discuss today is Matinee program #8, as advertised on this poster. It is not a true Saturday Matinee as in movie theater matinee. These are Saturday morning shows on TV. Why am I not a purist about the Matinee make-ups? Because I feel variety will attract a different audience and will keep the regular audience interested. In my opinion, this show is pretty entertaining. A not-entertaining program would include an episode of the TV Corliss Archer. Howdy Doody has the "Old-Time Movie" removed. These were silent comedies narrated by Buffalo Bob as the kids watched: "Little Mickey is going to get a pie in the face now. There, wasn't that funny." They were also markedly poorer quality than the rest of the Howdy show. Comic maniac Dayton Allen does appear in this episode in Clarabelle's dream, plus the Flub-a-Dub, something about oil wells vs. seltzer wells, clues to... who owns which well, I think, and mainly lots of ads!

Space Patrol episode is "The Hidden Treasure on Mars," that starts right after Buzz and Happy enjoy a hearty breakfast of Wheat and Rice Chex. Serial and B-western character actor I. Stanford Jolley is featured as a kidnapped scientist that the Commander must rescue while unravelling the clues of the mummy cases and totem heads. An excerpt is included from Andy's Gang in which Andy Devine spars with Froggy the Gremlin and a talking orangutan. The show concludes with a color episode of Sgt. Preston of the Yukon: "Dog Sled Race." The quality of this episode is excellent and should look good on the big screen.


Visit my website at Festival Films.
Posted by Ron Hall at 10:46 AM