Make it A Show! 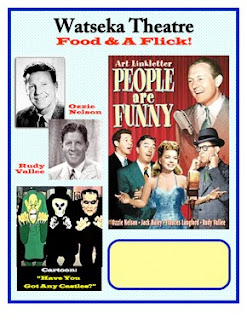 For movie theater showings, I will turn any feature film into a program with cartoons and shorts. This includes creation of a poster that you can use to promote your Show. I put the poster on my website to advertise the Roxy Programs to other potential users. In turn, you can download and print the poster, or use the Jpeg right on your own website.

I have been creating programs for awhile (outside of the Horror, Crime, Matinee, etc. series that include serial chapters) and many posters created for specific shows can be viewed and used at Just Classics. This page promises more posters soon, and arranged by genre. I have started a comedy posters page where you will find the poster for People Are Funny. How can you use the poster, one might ask, if it says "Watseka Theare, Food and a Flick" on it? Just ask and I will change it to your name. I will also remove the Watseka name in a month or so after they are finished showing it. The same applies to Matinee #3 whose posters currently say Parkway Matinee with specific dates.

Since Art Linkletter passed away recently, here is some info on People Are Funny, the 1946 movie, from IMDB: A comedy based on NBC's "People Are Funny" radio (and later television) program with Art Linkletter with a fictional story of how the program came to be on a national network from its humble beginning at a Nevada radio station. Jack Haley is a producer with only half-rights to the program while Ozzie Nelson and Helen Walker are the radio writers and supply the romance. Rudy Vallee, always able to burlesque himself intentional and, quite often, unintentional, is the owner of the sought-after sponsoring company. Frances Langford, as herself, sings "I'm in the Mood for Love" while the Vagabonds quartet chimes in on "Angeline" and "The Old Square Dance is Back Again."

FYI, I deleted a musical sequence where the Vagabonds appear in black face. The film is better without it ... my opinion. I do not censor out black singers, bands or dancers, but black face is too risky unless it is Fred Astaire in Holiday Inn upholding a long theatrical tradition. Ozzie Nelson and Rudy Vallee are quite funny together. An extended sequence toward the end/climax purports to show a "People Are Funny" radio show hosted by Mr. Linkletter. In short, pretty entertaining for those to whom this sounds like fun. 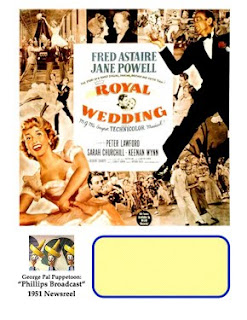 As I make these prgrams up, I see a huge transformation from mere feature into a Show. Who doesn't like vintage cartoons? All the "Not me!" answers out there can go buy popcorn. Trailers are great fun even if they are for films you will NOT see next week, like Earth Vs. the Flying Saucers, The Giant Claw or Forbidden Planet. If the feature is real short, I can add a comedy short like The Three Stooges. I add a quickie 10 second Café Roxy intro to the tune of the Universal Pictures opening fanfare. This can easily be bypassed. Many shows end with tail music ... Thank you for coming ... See you next time ... and fade to black with the going home music continuing.

Even a show as famous as Royal Wedding benefits by the addition of a little something, in this case a George Pal Puppetoon and a 1951 newsreel. "With Selected Short Subjects" is an old practice that added so much to movie showings during the golden age of movie exhibition. 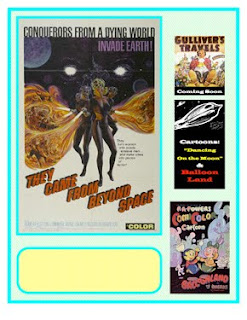 I remaster each by checking quality and modifying sound levels. If I don't feel the quality is up to theater showing, then I cancel the order while I look for better material. As there are roughly 2,000 feature films in the public domain, I welcome any chance to review them for both quality and content. This week I made up a program for the science-fiction film They Came From Beyond Space. I thought my old master was only acceptable quality, but the new one looks much better and I re-watched enough of the film to see that it moves along pretty well and has some engaging sci-fi ideas.

There are not very many sci-fi cartoons. I added the Fleischer Color Classic "Dancing on the Moon" about a rocket tour to the moon with honeymooning animal characters -- 2 bears, 2 seals, etc. Mrs. Cat gets left behind, so the cat newlyweds don't get a visit by the stork upon Mr. Cats' sad and lonely return to earth. The second color cartoon is one I use a lot -- UB Iwerks Balloon Land from 1935. Many, many people over 60 remember this cartoon fondly, or fearfully, from childhood and it makes instant memories in kids today. The evil Pincushion Man breaks into Ballon Land and kills lots of balloon folks with pins. A late shot shows him falling off the "Land" into empty space. The trailer for Gulliver's Travels was added because the theater probably plans to show that film soon. Now they will have to after running the trailer.

Once a feature is "Roxified" with shorts, I offer this version to any TV station that might order the feature. They need to input the DVD into their computer system before broadcasting anyways, so they can either use the feature by itself or with the shorts. Added value, or something you can't find on DVD anywhere else, is what I love to offer. Movie Theaters tell me they like it, and are using the posters as well.

So remember, I will turn any feature film into a program with cartoons and shorts. Just ask.


Visit my website at Festival Films.
Posted by Ron Hall at 10:33 AM