A Trip Thru the Poster Box! 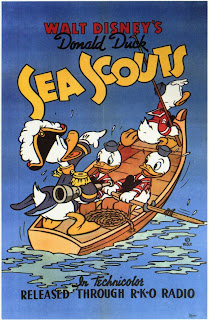 I went to my first film convention in 1969 -- Cinecon #4 in Hollywood -- and have been going to one or two a year ever since. Mostly I get to the Syracuse Cinefest every March, and it just celebrated it's 30th year. But the topic today is my movie posters and I found many at these film gatherings where they showed rare, vintage films in one room and sold memorabilia in the room next door. In those early days they sold a lot of 8mm and 16mm film prints. I collected 16mm since that was the only way to see rare films back before the days of home video. I largely overlooked the posters, but today the films have lost value and good posters are out of sight. Had I only known where to put my money....

So I never collected posters seriously and I rarely looked thru the many bins of them at conventions. There were too many posters and they cost too much. However, one year I fortunately noticed a bunch of lobby cards from Alfred Hitchcock films. They could not have cost that much or I would not have been tempted to buy. I don't recall the prices but I imagine around $10 apiece, so I perused and purchased about 15 of them trying to get at least one card from each Hithcock film that was available. I should have just bought them all, of course. They range from a Rear Window reissue that is worth little, to unattractive ones from The Wrong Man and To Catch a Thief to the rather valuable Mount Rushmore card from North By Northwest and the title lobby cards from Shadow of a Doubt and Notorious. Also Grace Kelly standing by the telephone in Dial M for Murder, two from Strangers on a Train and Janet Leigh at the window in Psycho and Cary Grant at bedside with glass of milk from Suspicion. Here is my actual card of Notorious that is sold by moviegoods.com. I know it is a copy of my card because of the minor flaws like the tiny white flake at the top of Cary's head. 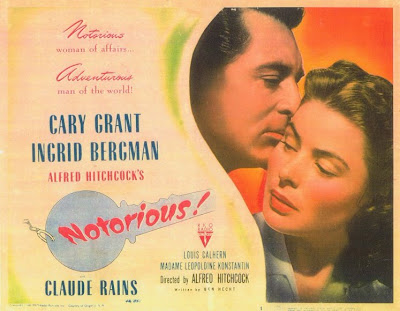 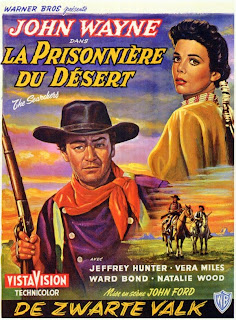 One reason I never acquired many movie posters is that I never framed and displayed them. That would take effort and cost money. Even today the only framed movie posters I have up in my office are a Belgian poster of The Searchers, that a friend gave me already framed, and a Fine Arts Serigraph reprint poster of Donald Duck in Sea Scouts, which we of course bought framed. An original one-sheet of the Disney sold at auction for $6,600 in 1992; mine is worth what I paid for it, or maybe $75, and there is no channel for re-selling it as a collectible. This Searchers poster sold in 2009 for $175. Many Belgian posters are gorgeous, but they are not dated and were sold for years to fans, so there is no particular value or way to prove that one has an original first issue poster. Mine is because I know the foreign source that gave it to me, and I enjoy it.

I have a far less attractive American window card for The Searchers that sells for more, and it resides where most of my posters do -- in some box or other. They have been in boxes for years, and because I have a poor memory it is always an adventure to open the boxes. One time they languished unlooked at for a very long time, like thru the entire 1980s. Remember that poor memory, so I don't really know, but it was so long that I was genuinely surprised by some of the posters I found. One of the biggest surprises in my life was to unfold a one-sheet for Singin' in the Rain. It is the familiar poster pictured here, but the surprise was to gradually realize upon close scrutiny that it was not a reproduction and it was not a re-issue from later years. Those posters would be marked as such in fine print at the bottom. Therefore, it could only be and indeed is ... an original issue one-sheet from 1952! 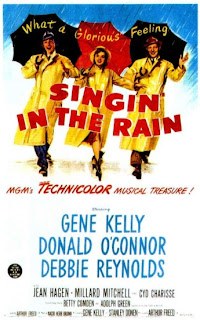 How did I ever get this one-sheet, one of which sold at a Christie's auction in 1993 for $1,265? I don't recall (yes, really) but have a guess. In 1973 I was running a film society in Minneapolis and had some contact with a man running a film series in St. Paul, John Scanlan. John told me he got posters to put up at his shows from a warehouse in Kansas City. I forget the details but any poster collector knows exactly which warehouse this is. So I asked John to order a few posters of any kind from a few favorite films. I know that's where my insert of White Heat came from and also a reissue poster for Dead End. My guess is that Singin' in the Rain came from this source (for about $10) and I never noticed that it was an original, or valuable. Several collector friends have examined the poster over the years and urged me to get it mounted on linen, which I finally did. So now it is stored in a tube, rather than folded in a box or framed and hung like it should be. Maybe I will get around to that someday.

I have just consigned 7 posters to Bruce Hershenson's Min-Major Auction in July. One poster is the Notorious lobby card pictured above. The most valuable one, I suspect, is a lobby card that apparently few have ever seen because it has never been auctioned before. I could not find any image of it online and it features two major cult stars about to kiss. On top of this, the 1928 Paramount film is lost! I will publish this poster image here as soon as emovieposter.com scans it properly in preparation for the auction.


Visit the combined Festival Films/Café Roxy Website!
Posted by Ron Hall at 7:13 AM