Two weeks ago I was in a conversation with the customer who ordered They Came From Beyond Space for showing in a movie theater. At one point he said: "I've already seen it on Youtube. I had to watch it in 7 sections. It's a pretty good film." After a delayed reaction of several days, I realized I should have replied: "That's nice. I'm glad you thought to view a film I offer for content, then come to me for the best version that includes some trailers, cartoons, a poster to make it a show, etc. However, there is a much better place to watch films online! 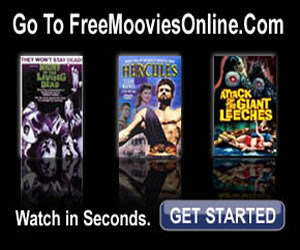 Click on the FMO logo above or click here -- Free Moovies Online -- to see what I'm talking about.

FMO is the brainchild of Franck Benedittini, who works out of French Guiana. Frank began as a web developer and website designer in 2004 and has created hundreds of websites. His own FMO site is a marvelously attractive, easy-to-use link to all things MOVIE, like his daily blog, his online magazine with extensive stories on John Wayne, Laurel and Hardy, Tarzan, etc., helpful links to the TCM site, Youtube, current trailers, and much more.

The heart of FMO website is the free movies you can watch online that look better than those on Youtube and are complete with one click. The "About Me" section states:

"Created in August 2007, FreeMooviesOnline (FMO) is an entertainment website that offers the largest selection of free public domain feature films on the Internet. With over 2000 public domain movies, TV shows, TV series episodes, cartoons and feature animations, FMO has something for everyone.

"FMO is a legal service. All of the films and television episodes on FMO are in the public domain. This means that the works were either never properly copyrighted, or their copyrights were allowed to expire and were never renewed as required by copyright law. Therefore, they are all now in the public domain, free and clear of copyright infringement laws.

"The professionals who work with FMO have a vast knowledge of the film and television industries, and have over 30 years of experience in the public domain business as well." 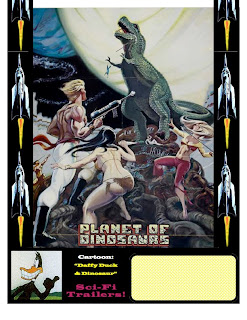 I have been supplying FMO with public domain films for just over two years. That's why I know he will soon be offering Holt of the Secret Service serial, Planet of the Dinosaurs, Adventures of Jim Bowie, Captain Z-Ro TV, Earthworm Tractors, Three Guys Named Mike, and others. I am pleased to be one of the "Professionals" associated with Franck and FMO.

Another part about me being slow is that I am finally telling my website visitors about FMO. My Festival Films home page sports a prominent link to FMO, and FMO links back to Festival Films. It is an ideal link exchange. I am happy that my customers can watch films before buying programs so they know what they will get. Many of my public domain films can be viewed free at FMO and more will appear in the months ahead.

Few FMO visitors will want to buy the films on DVD-R. They go to FMO to watch and have fun. For FREE! I think I said that. However, lots and lots of them go there. The average is 20,000 to 30,000 a day, and last December reached one million for the month. That is a lot of visitors and some just might be the special consumers I am looking for. The link from FMO to Festival Films says: "Festival Films. Public domain films for TV stations and movie theaters. High-quality, low-cost masters of DVD-R." A blog entry at FMO this past week states:

This company is a true mine of classic films for Movie Theaters, TV Stations, Film Societies, Restaurants and Bars who are equipped to show films from DVD for either large screen TVs or video projection. If you fall in such category, you certainly need the best possible quality and assurance that each film is in the public domain. Festival Films will supply this information with each film and you can benefit greatly by getting Programs that include cartoons or shorts. All the films are clean with no company logos or watermarks over the picture. Also, Festival Films offers a quality guarantee – if any film is below par they will replace with a different title. Festival Films offers a FREE SAMPLER DVD to test how your customers like it!"

"Keep in mind that FMO doesn’t allow you to download the videos; it’s against our Terms of Use. However, you have the possiblity to purchase your favorite cult movies at Festival Films."


Visit my website at Festival Films and see the new link to FMO. When you want to preview a film, click over and see if FMO has it. If not, tell either of us and FMO will have it soon!
Posted by Ron Hall at 7:07 AM