"Space Patrol! High adventure in the wild vast reaches of space. Visions of daring in the name of interplanetary justice. Travel into the future with Buzz Corey, Commander in Chief of... The Space Patrol." Thus began every exciting adventure from 1950 to 1955 on Saturday morning. It is the first TV series I recall regularly watching (at a friend's house) before we had television ourselves. I suspect I did not see it until 1952, but stuck around until it snuck away and at the age of 9 may have felt too sophisticated to miss it.

Space Patrol has been on my mind lately since I recently watched a few episodes and spotted an ad for a toy I had as a kid -- the official Space Patrol Periscope. You could use it to peak over fences (had none) or around corners in rooms or trees (had those) or around space rocks on the moon to watch villains at their dastardly deeds (never tried that). Another ad was for a totem head helmet that was actually used as a prop in the show. The buy-for-home-model was of course cardboard, and I suspect the ones on the show were identical! Not sure I had one of those, but I do recall a Space Patrol space helmet with secret one-way vision: you could see out the plastic but no one could see in to see who you were. The things cost about .25¢ but were super exciting to get in the mail, unpack and unfold! 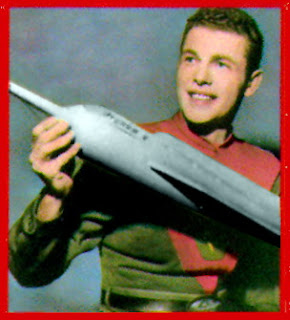 So these thoughts were running through my head when I named today's blog, which has nothing else to do with Space Patrol!

"Blasting Off!" refers to my revamped, refurbished, reinvigorating and resoundingly fabulous new-look website! Please, kindly, go take a look at it.

Most pages look like this sample one on the left. The two side bars are common to most pages. On the left is the Festival Films section that concentrates on public domain films. At anytime while browsing the site you can click on the vintage television set and return to the Catalog of Public Domain Films home page. Here you can pick any genre of interest -- Comedy, Horror, Sci-Fi, etc. -- click and go to that page, which will look like the example shown here of lists of films that are in the public domain. I have already added the genres of Muscle Men, Exploitation and War films. Coming soon -- Kung Fu -- or I may call it Kung Fooey. The Action-Adventure page is being revised with Jungle Films added so far. 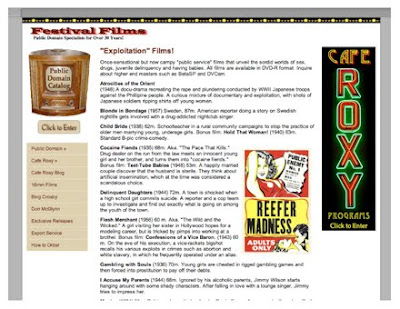 At the top of each genre I clarify that all films are available on DVD-R, and some as double features as noted. Here is a typical entry: Jungle Bride (1933) 63m. Charles Starrett, Anita Page. Persons shipwrecked on the coast of Africa face many jungle perils. A nice Monogram effort. Bonus feature: Tentacles of the North (1926, silent) 54m. Two ships are trapped in the Arctic ice. I also note that higher end video masters are available on formats like BetaSP and DVCam. Companies who process into commercial DVD releases need the highest quality with least compression. Whereas small TV stations and online streamers can use the more economical DVD-R format.

A quick click on the large Café Roxy sign will take you to a Roxy home page with links to all the programs. These pages are still in the old format which is mainly all the posters that both advertise each program to YOU and are also for your use to promote your showings. So the website -- here's another chance to go look at it -- is divided simply into the two aspects of Public Domain Films: 1) What they are, and 2) What you can do with them.

Here is how I got the long overdue, desperately needed and greatly appreciated website make over. I have one son, Jeffrey, who is a computer programmer. He has worked his way up through a number of jobs and only this year got hired by a firm in Silicone Valley. Jeff moved to Menlo Park and works in downtown Foster City, California. In his new job he is doing more website design than he had before, and he ran across a template he thought would work for me. Just a few weeks ago in the May 2 blog I wrote about combining Festival Films and Café Roxy websites. Jeff's offer and the final results happened since then! Thank you, Jeff, I am really happy with how the new site looks and works.

I have plenty of work ahead putting in several hundred new titles and revising many pages, but the framework is all set. Please go check it out for yourself and email me any comments to fesfilms@aol.com.


Did I mention you can reach the new website by simply clicking here?
Posted by Ron Hall at 11:09 PM