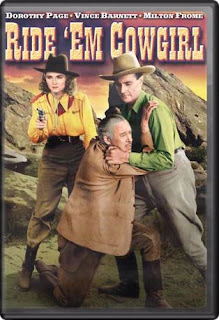 A truly surprising B-Western might unfold thusly: A cowgirl rides into town with her sidekick, perhaps played by Maude Eburn, meets a young, helpless (male) rancher whose elderly mother has just been killed by the bad guy. (We can assume the boy's father died in child birth.) The heroine with two six-guns takes up the cause to save his ranch, they almost fall in love but instead she rides off into the sunset at the fade out.

That film was never made, although a handful of B-westerns had a girl lead -- Dorothy Page. Dorothy started as a singer with Paul Whiteman, and was tested by Universal in the low-budget musical Manhattan Moon (1935). Her three westerns for cheapie studio Grand National were not particularly successful, as audiences didn't warm to the idea of a singing cowgirl the way they had to a singing cowboy. If you can, check out The Singing Cowgirl (1938), Water Rustlers and Ride 'Em Cowgirl (1939). I have only seen Water Rustlers, where she stars above the ineffectual Dave O'Brien, and can attest that it looks and feels like every other B of the era except for the switch in gender emphasis. 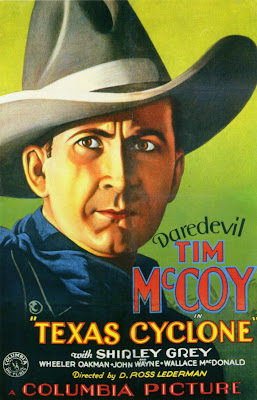 My candidate for a recently viewed western that surprised me is Texas Cyclone (1932) starring Tim McCoy. Tim had such a colorful life that I would like to share it with you courtesy of the IMDB:

One of the great stars of early American Westerns. McCoy was the son of an Irish soldier who later became police chief of Saginaw, Michigan, where McCoy was born. He attended St. Ignatius College in Chicago and after seeing a Wild West show there, left school and found work on a Wyoming ranch. He became an expert horseman and roper and developed a keen knowledge of the ways and languages of the Indian tribes in the area. He competed in numerous rodeos, then enlisted in the U.S. Army when America entered the First World War. He was commissioned and rose to the rank of colonel, eventually being posted as Adjutant General of Wyoming, a position he held until 1921.

In 1922, Tim was asked by the head of Famous Players-Lasky, Jesse L. Lasky, to provide Indian extras for The Covered Wagon (1923). He brought hundreds of Indians to Hollywood and served as technical advisor on the film. After touring the country and Europe with the Indians as publicity, McCoy obtained further work in the movies, both as a technical advisor and as an actor. McCoy rapidly rose to stardom, making scores of Westerns and occasional non-Westerns. In 1935 he toured with the Ringling Brothers Circus and then with his own Wild West show, but returned to films in 1940 teaming with Buck Jones and Raymond Hatton in The Rough Riders series.

So why did Texas Cyclone surprise me, one might ask? The plot is a bit different and far-fetched with a surprise ending I won't reveal: When Pecos Grant arrives in Stampede, Arizona, he is greeted as Jim Rawlins, a former inhabitant, believed dead for five years. Utah Becker, town boss and traditional enemy of Rawlins, starts a fight but Pecos quickly ends it. On the advice of Sheriff Lew Collins, Pecos, a rancher from Texas, decides to keep up the pretense. He finds that Helena, Rawlins' wife, is having her cattle rustled by her own cowhands, and he fires three of them and accuses Becker of being behind the conspiracy against Helena. Pecos sends for his Texas riders and succeeds in running the Becker gang out of Stampede. 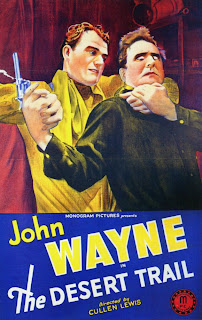 The principal interest is in the actor who played the cowhand that Tim did NOT fire, because I never knew he had made a film with Tim McCoy even though I have enjoyed most of his other westerns for years and years. 20 minutes or so into the film Tim walks into the bunkhouse to meet his wranglers and off in the corner stands John Wayne, who dominates every subsequent scene he is in. A plot contrivance has Wayne wounded by henchmen so that only Tim faces the final shoot-out with baddie Wheeler Oakman. To be perfectly clear here, John Wayne is playing Tim McCoy's sidekick, in a dynamic similar to James Ellison and Russell Hayden doing much of the fighting and romancing for the older William Boyd in the Hopalong Cassidy series.

Wayne also made Two-Fisted Law in 1932 during his short stay at Columbia and also with Tim and Wheeler and, I forgot to mention him in the cast -- Walter Brennan in one his youngest roles ever as a "codger" at the age of 38. Wayne's Lone Star western Desert Trail, shown in the poster here, is from 1935.

There is another reason to rush to see Texas Cyclone from Netflix or a rental store (are there any left?) The film was copyrighted and renewed by Columbia, who still holds 35mm material, so the DVD is the result of a recent high definition transfer. No B-Western has ever looked this good on video!


Posters for all Café Roxy shows can be viewed at Roxy Programs.
Posted by Ron Hall at 9:41 AM