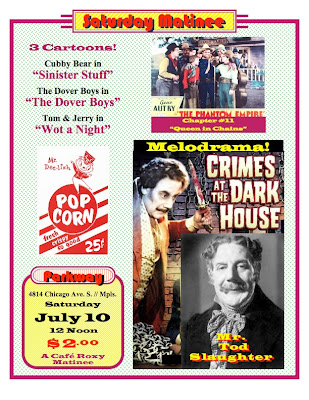 "Polishing Off" is a phrase affectionately used by Mr. Tod Slaughter in many of his films, as in to "polish off" a patron in Sweeney Todd means to cut his throat and send him downstairs to meat pie heaven. I have been polishing off the programs and posters for the Matinee 3 series and you can view the entire line-up Here.

One of my missions, as mentioned in an earlier blog, is to spread the joy of Slaughter-dom to the uninitiated. To that end (pun) drop everything and go watch Tod Slaughter At Home. This 1936 short shows Mr. Slaughter off at his best, laughing maniacally throughout. A sign outside his door reads "Sweeney Tod Slaughter," alluding to the curious connection between his name and his most famous role. The over-the-top humor continues when a newsreel photographer enters to film his subject but is strapped in a barber chair for a shave. A scantily clad young lady wanders in from a neighboring set so that Tod can carve out an unexpected present for the barber victim. Leonard Maltin commented: "This is GREAT! Thanks for leading me to it!"

And I feel great about my decision this week to add Tod Slaughter's Crimes at the Dark House (1940) to week 11 of my third Saturday Matinee series. I just acquired excellent material on the film, which led to the inclusion, but I also feel it is his most enjoyable film for audiences today. In the first scene Tod creeps up on a sleeping man and pounds a spike into his brain! He then impersonates the man back in England to claim his estate and promised bride while murdering his numerous enemies. The film is based on the celebrated novel "The Woman in White" by Wilkie Collins, which has been re-made for TV in various countries in 1957, 1960, 1966, 1970, 1980, 1992 and 1997! Whew! I think Hammer Films made a version as well. Basically, this version is an old-fashioned melodrama centered around the black villainy of the protagonist. You can view a short scene in the trailer I made to plug next week's film in Matinee Show #10.

That link actually shows trailers to the last four shows in the series. Besides Crimes at the Dark House, enjoy my productions plugging Missile to the Moon, The Big Show and Speak Easily. I simply take some good scenes out of each film, add "Next Week" lingo and sometimes words over the film clips, and that's all folks! The three best shots are in the prevu for Missile to the Moon -- a hypnotic scene by the moon woman, the giant spider attack and the rock men. Like a good trailer, this should inspire feelings of "I gotta see this!" Not true. You just gotta see the trailer!

I thought about but did not use Sweeney Todd in the Matinee. Sweeney starts a little slow and you need to know the story to appreciate it. Most people do know the story, but due to self-censorship, one assumes, this version does not clarify what happens between the bodies dropping into the cellar and what turns up in the meat pies. You know, don't you??? To make room for Tod and his more enjoyable Crimes film, I bumped Sherlock Holmes and the Secret Weapon. Most fans have seen the Holmes film, and while not bad it just doesn't compare with the promised joys of seeing Mr. Slaughter cackling on the big screen.

Notes on some of the other Matinee programs will appear in upcoming weeks.

Posters for all Café Roxy shows can be viewed at Roxy Programs.
Posted by Ron Hall at 11:25 AM