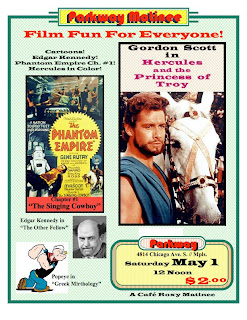 This is the one-year anniversary of starting this blog about films in the public domain, Café Roxy programs, what films influenced me in childhood or whatever.

The Parkway Theatre in south Minneapolis finished the second series of Saturday Matinees a few weeks ago. This past week I learned they want to keep going and ASAP, so I've been busy planning, postering and mastering the next 12.

I picked the 1935 The Phantom Empire as the 12-chapter serial. Retro sci-fi with robots and death rays is always fun, but add in cowboys, cars, planes, radium, a lost city and Gene Autry in his first starring role equals an unbelievable, unforgettable amalgam of Astounding. I don't have time to show the trailers at the Parkway, but they can add a link to them and you can watch the trailers here. The short trailer that plays first appeared in theaters after Chapter #2 had concluded. It urges kids to come back every week for more, much like the weekly trailers for what will happen next week in "Lost" or "24." All scenes in the short trailer center on the futuristic city of Murania, with no shots of Gene Autry since he presumably just got killed off at the end of Chapter #2, right? The long trailer runs nearly 5 minutes!

The first chapter of the serial runs about a half hour, so I needed something short and vastly different for the feature. Hercules and the Princess of Troy is actually a pilot for a Hercules TV series that never happened, but it's in color, stars movie Tarzan Gordon Scott and has a sea monster that rivals the one in, um, "Creature from the Haunted Sea." Popeye battles Hercules in the 1954 Paramount color cartoon "Greek Mirthology," which certainly fits into the show even if a far cry from the best of the Fleischer gems. Remember that all the films must be in the public domain. "The Other Fellow" is a delightful 1940 one-reeler from the Jam Handy company, that is actually a commercial release by Chevrolet to promote good driving. Edgar plays 4 different roles as car drivers with diverse problems on the highway. 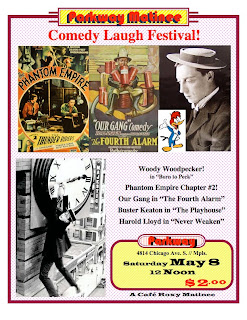 Program #2 needed to be a big change from #1 so I picked comedy shorts. This is not an honest recreation of a Saturday Matinee (other than the serial chapter and cartoons) since the 3 comedy shorts are from the silent era. However, it will be wonderfully entertaining and hopes to attract a different audience. They will not see Harold Lloyd hang from a clock in that iconic image from the 1920s, but they will see him dangle from a skyscraper under construction in "Never Weaken" (1921). In "The Fourth Alarm" (1926) Hal Roach's Little Rascals start their own fire department with screwball vehicles and real fire to fight. Buster Keaton plays dozens of roles, including filming himself 7 times in the same scene and dancing of all things, in "The Playhouse" (1921). 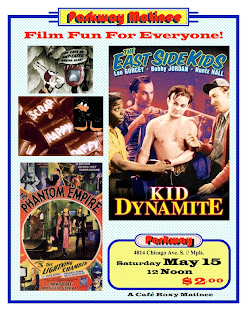 The East Side Kids short feature Kid Dynamite (1943) was chosen purely because I had it in excellent quality and wanted to use it. More serious than some of the East Side Kids, Dynamite examines a rivalry between boxer Mugsy (Leo Gorcey) and Bobby Jordan who is dating his sister, all in the context of enlisting in World War-II. Daffy Duck in "Scrap Happy Daffy" (1943) battles not only enemy spies who are after the scrap heap he has saved for the war effort but he gets to bop Der Fuhrer in person! The Fleischer Color Classic "Ants in the Plants" (1940) was added for a little color, but it does feature little guys, a colony of ants, going to war against the big, bad Anteater. 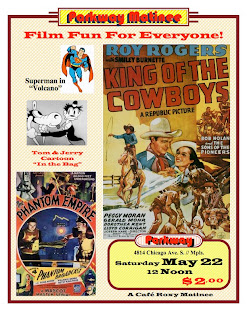 And finally, for today, poster and program #4. I picked King of the Cowboys (1943) with Roy Rogers because I already had a trailer for it and did not need to make one. (The trailer of course appears in program #3 to advertise what is coming next week.) King is one of Roy's 10 or 15 best films. From IMDB: "It's World War II and saboteurs are menacing Texas. Only singing cowboy Roy Rogers and his wonder horse Trigger can save the day! The Governor sends Roy to help bring in a gang of saboteurs. Roy joins a traveling show and soon learns the saboteurs communicate during Maurice's mind reading act that uses a hidden receiver. But Maurice is on to Roy. Roy narrowly escapes when Maurice leaves him tied up in a warehouse they are blowing up. But Maurice then kills a man and blames Roy who now finds himself in jail." Curiously, Roy's sidekick this time around is Smiley Burnette, who is with Gene Autry in "The Phantom Empire." The Tom and Jerry cartoon "In the Bag" is western themed and Superman in "Volcano" is added for the color.

Each show includes a coming attraction trailer to promote next week's feature film. While I had the original trailer for Roy Rogers, I make up the others using clips and "Next Week" type wording. So the trailer for Program 2 includes clips from each of the three comedy shorts. For Kid Dynamite I just took most of the first scene and faded into the Main Title and then into Coming Next Week. The trailer for Program #5 is finished since I needed to include it in Show #4, and that film is the Joe E. Brown comedy Earthworm Tractors. I took an early scene of the tractor out of control, cut it and added the main title. It looks like a fun film and should attract viewers to come back next week, as if robots in Murania are not enough!

Four posters and four shows in one week was fun to put together. I'm not sure exactly what the other 8 shows will be, but you can bet I will report them here in the near future.

Visit my website at Festival Films.
Posted by Ron Hall at 10:21 AM