B Westerns on My Mind! 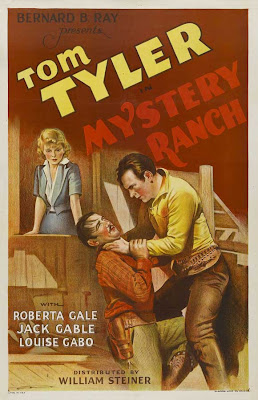 I've been going through the 300 or so B-Westerns I have on DVD recently to organize, check quality and see just what exactly I do have. That's not a large collection considering there must have been 2,500 or more made in the 1930s and 40s. B Westerns are inexpensive series westerns that run about an hour starring Buck Jones, Tex Ritter, Tom Tyler, Bob Steele, Roy Rogers, Gene Autry, Harry Carey, Tim McCoy, Ken Maynard and some I would have trouble picking out of a lineup like Bob Baker, Art Accord, Kermit Maynard or Yancey Lane (never heard of him in my life until last week).

My resource for some time has been The Old Corral website. I encourage everyone to visit for hours of reading about every single B-western cowboy star and sidekick. But no amount of research beats watching a good B.

How can you keep watching those things? They're all the same! What do you see in George O'Brien? I hear similar questions from time to time. As my friend Ron Butwin once said: "I just like watching stuff."

Anyway, today's spotlight is on "Mystery Ranch" starring Tom Tyler. A famous Western fiction writer is invited to a real ranch where the owners hope to entertain him with a series of stunts similar to those found in his phony stories. Tom catches on to the gags, but when an actual bank robbery takes place he believes it to be another stunt. Since I like the plot about dude goes west and makes good (though muscular Tom Tyler who played Captain Marvel could scarcely pass for a sissy) I took a look.

What often grabs me is anything different. The film opens with a melodramatic scene from the writer's book, as in old-time Victorian melodrama with a mustachioed villain who ties up the heroine and is about to have his way with her. The dialog is overblown, to say the least -- "Marry me or I'll tear you limb from pieces." The hero and heroine clinch in possibly the most passionate smooch in western history. "Crash into my arms and kiss me, my sweetheart, my angel, my darling..." Cut to Tom's father who has been reading the scene. "This stuff is terrible, son, simply terrible. Why I'm surprised that you're writing such worthless trash." Tom: "Not so worthless, Dad, that book has sold 50,000 copies to date."

Here is something different -- alert the media!!! -- the heroine's mother is still alive! This only happens 1 in 100 westerns. I recall one Buck Jones and one Hoppy with mothers. The moms always die in childbirth. The girls usually live on the ranch with their dads, who get killed by the bad guy in the first ten minutes. Heroines have a lot to look forward to at the end of the film -- marry the hero, have a kid a year later and most likely it's curtains for them.

Meanwhile, once Tom reaches the ranch, the three real baddies are played by three guys you've seen a hundred times (if you've watched a lot of these things.) First is Tom London, who has the reputation of appearing in more movies (other than extras without lines) than anyone else. The IMDB lists 614 roles from "The Great Train Robbery" (1903, uncredited) to an Old Timer in a 1961 episode of "Cheyenne." Second is George Chesebro, little man from Minneapolis with a sneer who excelled as henchmen in 416 listed roles from 1915 on.

Third is everyone's favorite (who knows him, that is) -- Charles "Blackie" King -- 410 roles on IMDB from "Birth of a Nation" (1915, uncredited) to "The Great Adventures of Captain Kidd" (1953, and again suitably "uncredited"). Charlie is the pudgy one who played head villains early in his career and a comic buffoon baddie later on. He turns up in nearly all the Bob Steele and Buster Crabbe westerns. He seems to have lived on the PRC ranch and made a couple films a week. Bob Steele commented that "they would always do his fight scenes with Charlie King at the end of the filming. He and Charlie would go out and drink a little lunch then come back, do the scenes, and totally tear the place apart."

The sheriff who arrests them all at the end is (surprise, also uncredited in this film!) Lafe McKee, who the IMDB credits with 407 roles from 1912 to 1948. See if you can pick out the 4 western stalwarts from the photos below. 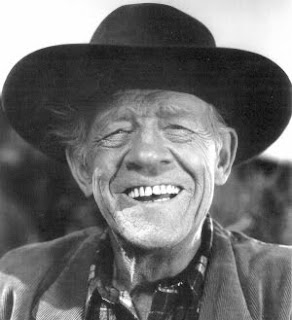 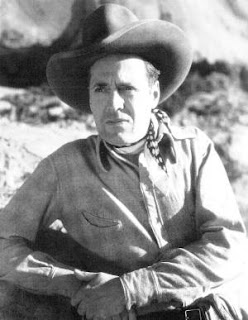 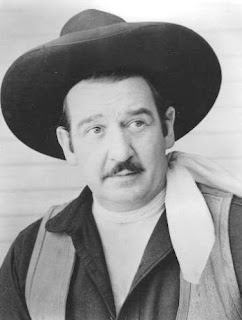 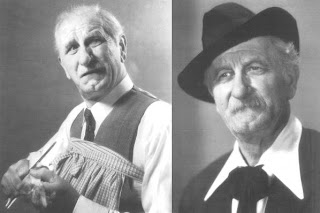 And that is one reason for watching lots of B-Westerns -- to enjoy the character actors!