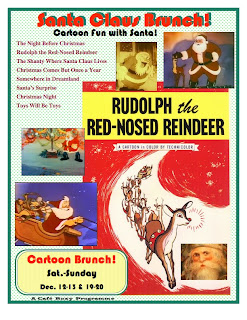 Today is the first of two weekends that the Suburban World Theater will run Santa Claus Brunch. It started out as a collection of Christmas cartoons, but I took out any religious ones and then realized that Santa was in most of the ones left, including a live action version of "The Night Before Christmas" from 1947. Ho, ho, ho! Santa transcends any specific religion. He's pagan, I think, and I love that. Also scary to some young kids. Love it. Ho, ho, ho! Or the bottom line -- Santa is omnipresent this time of year, a fun part of Christmas and may attract brunchers. Click on the poster to enlarge so you can read the cartoon titles.

A minor, um, glitch at the Suburban World is that they use a 5-slot, revolving tray DVD player. By coincidence it looks like the first DVD player I ever had, still have, that plays OK but is pretty old now. Anyway, there is no simple way to keep track of which DVD disc is in which slot. So while they start with the new Cartoon Show each week, once it repeats and ends the machine switches right on to the next disc that is some previous show. If the customers don't complain about seeing last week's show, I guess they weren't there, and if they do complain I assume someone will push a button on the DVD player and get back on track! 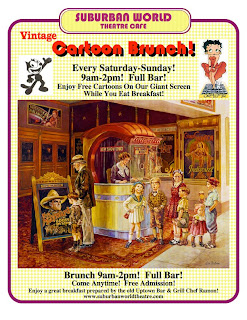 I had been giving the Suburban World a different poster to use at their website each week that listed specific cartoons on each disc. The idea was of course to run the cartoons that are advertised. That way a patron could check the website and be assured he would see an all-new show. However, the theater is not necessarily running the advertised cartoons at any given time, for the reason just explained. Because of this situation I created this generic poster they can use all the time to promote Cartoon Brunch.

I gave the Parkway a copy of Santa Claus cartoons to run on their screen silent during an upcoming party, I believe a high school reunion party. The cartoons will be wall paper! The theater has permanent theater seating except for an area of movable couches down front, so I guess that is where the party will center. I assume the lights will be on but don't really get how it might work. If it doesn't work so well, they can always turn off the films! Because the theater owner also owns the attached Mexican restaurant PEPITOS, patrons are permitted to bring wine and beer into the theater after 7 at night or during closed private parties. I wonder how they worked that zoning use out? 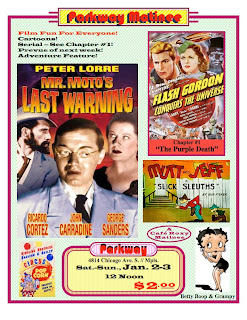 About three weeks ago the Parkway's Matinee series was interrupted by a special film festival that came up suddenly, which is why the dates were pushed back a week for the last four shows. Two, yes two, kid birthday parties showed up to see the movies. As compensation that must have generated some good will, they gave them all a free Mexican buffet brunch that was already set up for the restaurant!

The Parkway's second Matinee series starts Jan. 2-3. The film line-up is almost set and will be discussed next week. Here is the poster for the first show. Note that I had to change the top title from Saturday Matinee to Parkway Matinee because they expanded to Saturday and Sunday shows.