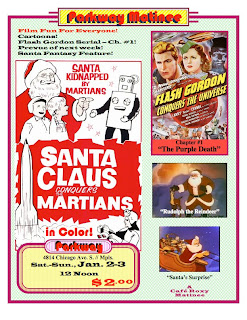 The first show in the second Parkway Matinee series begins Saturday-Sunday, January 2-3. The title has changed from "Saturday Matinee" to "Parkway Matinee" because they added Sunday showings. Saturday Matinee in my mind stands for the kind of program with cartoons, serial chapter and a short feature that was in fact shown to kids back in the old matinees, usually on Saturday afternoon. You can schedule the programs at night or Tuesday or anytime and still call it "Saturday Matinee." However, I don't want to confuse anyone who might come to the Parkway Sunday at noon....

The first program has suddenly changed to "Santa Claus Conquers the Martians" for an odd reason. A local church is staging a one-hour live play version this coming Sunday, and the unusual production got a big article in the paper this Wednesday. Go check out the complete article that starts out: 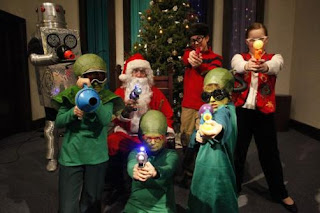 "Holiday productions typically feature little green elves, oversized Santas and festive holiday decorations. But this year the Unitarian Universalist Church of Minnetonka will add another component to its tradition: Martians. On Sunday, the church will put on its first-ever production of "Santa Claus Conquers the Martians!" Originally a 1964 movie, the offbeat story has been adapted by Minnesota playwright Jeff Hatcher into a 60-minute play for the church."

This set me thinking... Why not run the film? I regretted not scheduling Christmas shows this weekend or next at the Parkway. Jan. 2-3 are right after New Years (duh! I wrote that?) but just before kids go back to school. Think of the 12 Days of Christmas and it is still Christmas vacation and Santa is still in fashion. The movie itself is of course silly and has been camped up on Mystery Science Theater 3000 as a classic bad film. The bottom line -- it's still fun! Real little kids might even take it as a real story. Under 4? Well, some kid somewhere who has never seen a film in a theater before...? Forget that, but they might well enjoy it and adults can laugh along. The first episode of Flash Gordon makes for two solid hours of campy Science Fiction with obvious toy space ships.

Whenever Santa Conquers Conquers the Martians is mentioned, the note is added that oh, wow, this is Pia Zadora's first film!!! She plays a martian child. So who the heck is Pia Zadora? I just looked her up on the IMDB and am still puzzled with the same question. Who the heck is she and why should anyone care that she is in this film? She appeared on one episode of "Hollywood Squares," for example, and similar accomplishments.

All 12 shows in the new series are online both for the Parkway Theater with specific dates and the $2.00 admission notice and also 12 generic posters with the Parkway info removed. These posters are for the future use of whoever else chooses to run the series. My introductory write up on the two pages is different. Both include a link to the new Parkway Trailer! 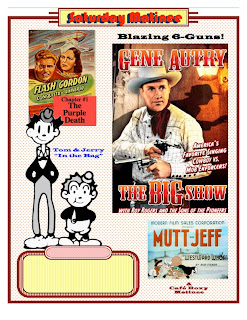 Because I assume most places will not want a Christmas-themed feature in the middle of July, I hastily added an alternate show #1 -- the Gene Autry feature The Big Show. This 1936 film is around the tenth one he appeared in and is one of the most enjoyable Gene ever made. He plays two parts -- a movie cowboy star with an attitude and his look-alike stunt double who is naturally named Gene Autry. When the prima donna refuses to appear at a big Texas Centennial festival, Gene is drafted to fill in. Lots of comedy, romance, songs, Smiley Burnette, on location filming at the festival, run-ins with racketeers and the studio boss and musical acts featuring the Sons of the Pioneers and an unbilled Roy Rogers all add to the fun. Darn, that does sound fun. Maybe I can work it in yet.

Three of the programs, to be discussed later, are not typical Saturday Matinee fare: 1) A Buster Keaton festival featuring three of his silent shorts. 2) 1950's "Kid" TV shows with excerpts from Pinky Lee, The Magic Clown, Super Circus, Howdy Doody, Beany and Cecil. 3) A similar 1950's excerpt show from the great TV Outer Space epics Tom Corbett, Space Patrol, Commando Cody and the German TV Flash Gordon. These were added for variety and the opportunity to get media coverage.