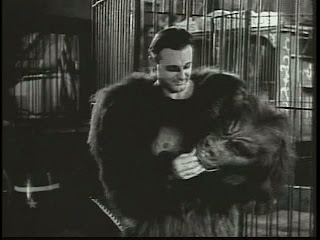 I have started preparing for the big end-of-the-month holiday. End of January, that is. January 31 is National Gorilla Suit Day, which fortunately falls on a Saturday this year. Any skeptics that there is such an animal may look to Wikipedia to find: "The holiday was concocted by MAD cartoonist Don Martin in a 1964 paperback Don Martin Bounces Back!. The most notable story in the tome revolves around a hapless fellow named Fester Bestertester, who dares to mock the concept of National Gorilla Suit Day and is thus repeatedly pummeled by gorillas. The holiday was recently promoted on comic book writer Mark Evanier's news from me blog until Don Martin's widow request that all references to the holiday be removed in late 2007.

"Gorilla suit performance involves pantomime, wearing a heavy costume, broad physical comedy skills, and a partial suspension of disbelief, while still playing on the very artifice involved. In this respect, gorilla suits are not far removed from puppetry. Jim Henson utilized typical gorilla suits, and never a full-bodied gorilla Muppet, in several productions. The person inside the gorilla suit is often uncredited."

Now that I've got your interest, please go watch my gorilla suit video. This video was made possible by the recent acquisition of a good quality White Gorilla trailer and the 1937 Three Mesquiteers western Come On, Cowboys. Ray "Crash" Corrigan is one of the Mesquiteer stars and gets to use his famous gorilla suit in the film in a most unusual way. Crash is pictured above and on the right here. 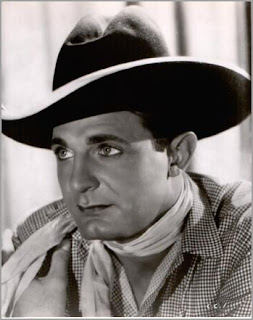 Ray's career in Hollywood began as a physical fitness instructor and physical culture trainer to the stars. In the early 1930s he did stunts and bit-parts. Many of his early roles were in ape costumes - for example, as a Gorilla in Tarzan and His Mate (1934) and an "Orangopoid" in the original Flash Gordon serial. In 1936 he got his break with roles in two Republic serials, The Vigilantes Are Coming and Undersea Kingdom (in the main starring role). On the basis of this, Republic signed him to a Term Player Contract, running from 25 May 1936 to 24 May 1938. He was cast as one the trio in the Three Mesquiteers series of films and starred in 24 in all. He left Republic in 1938 in a dispute over pay.

At Monogram Pictures, he began a new series of films - The Range Busters (a cheap copy of the Three Mesquiteers) - with a character of his own name. Ray starred in 20 of the 24 films in this series between 1940 and 1943. Following this, his on screen work largely returned to appearing in ape costumes - for example, the title roles in Nabonga (1944), White Pongo (1945) and as a prehistoric sloth in Unknown Island (1948). The original gorilla "mask" seen in films like The Ape (1940) was replaced with a subtler design with a more mobile jaw. In 1948 he sold his gorilla suits and provided training to Steve Calvert a Ciro's bartender. Calvert stepped in Corrigan's pawprints beginning with a Jungle Jim film. Despite reports to the contrary, Calvert and Corrigan never appeared together in ape costume. Since both Corrigan and Calvert eschewed screen credit as gorillas, credits are often confused. Any appearance of the "Corrigan suit" after 1948 is Calvert. 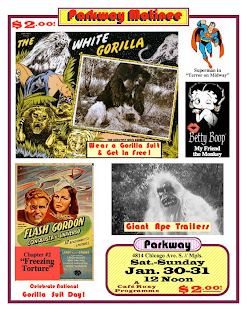 In 1950 Corrigan had a television show called Crash Corrigan's Ranch and was planning a television series with his old associate Max Terhune called Buckskin Rangers. Corrigan's last film was playing the title role of It! The Terror from Beyond Space.

I am planning two local events for Gorilla Suit Day(s) -- January 30-31: A Gorilla Brunch at the Suburban World Theatre that gives away Free Bananas and a showing of White Gorilla at the Parkway Theater. "Wear a Gorilla Suit and Get in Free!" If they can't get some media coverage for this...!

Here is an early poster for the Parkway. The good news is that the Parkway is starting a second Matinee series on Jan. 2 around the serial Flash Gordon Conquers the Universe and at the same time expanding the shows to Sundays at noon!