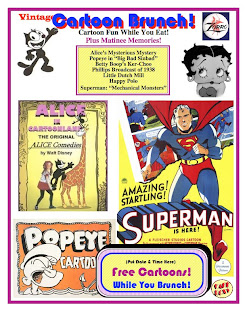 Ideas have evolved since my visit to the Suburban World's Cartoon Brunch last Saturday. The 6 or 7 color Warner Bros. cartoons that were running when I walked in were not a satisfactory show because they were all too similar. Cartoons were made to be shown one at a time in theaters, and never meant to be watched one after another. At the very least, mix up the characters, studios, etc., for variety. The cook or waitress can't change discs every other cartoon. The owner, Don Driggs, agreed and wanted more vintage cartoons. This was a huge relief that he did not want current TV cartoons! He seemed pleased when he began the sample show I had brought that started with the silent era cartoon "Felix in Astronomeous." Black and white cartoons alternated with color; characters like Popeye, Betty Boop and Superman alternated with non-character cartoons like "Song of the Birds."

I walked in with a further idea to expand Cartoon Brunch into Matinee Brunch over the next few months. I included on my cartoon disc an 8-minute promo for Matinee Brunch that was similar to my "Matinee Jr. for Libraries" clip on Youtube, with the Flash Gordon serial chapter ending, W.C. Fields, Laurel and Hardy, Balloon Land, Popeye, 3 Stooges, etc. clips. In fact, the promo was identical except for shots of the Suburban World and "Coming Soon" blurbs. 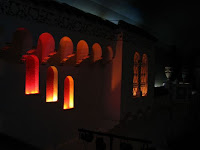 The promo clips went over very well because they were short, fun, added variety and addressed the "short attention span" syndrome. They worked so well that I had second thoughts whether this audience would sit through an entire 2-reel comedy. Would they watch all of W.C. Fields' The Dentist? Would they have more fun seeing the golfing segment one week and the tall woman having her tooth pulled a second week? Wouldn't they have more fun watching 3 minutes of a serial chapter ending than the entire serial chapter? Thus evolved:

The name will remain Cartoon Brunch because it is simple and catchy. Most people enjoy weekend brunches. Most kids enjoy cartoons. Most families like new family activities and thus will try Cartoon Brunch at least once. Each one-hour show will include around 7 cartoons plus two "Matinee Memories" like coming attraction trailers to horror films, serial chapter endings, comedy gags, western stunts and whatever I think will entertain from the vast library of public domain films. 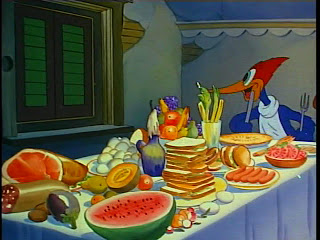 A promo for the new Suburban World Cartoon Brunch is now available for viewing! It includes some nice interior shots of the theater plus a mini-brunch show with both cartoon snippets and "Matinee Memory" clips of a chapter ending for Flash Gordon and the ever-popular Giant Claw Trailer. My thanks to the Woody Woodpecker public domain cartoon "Pantry Panic" for the image of Woody eating!

Cartoon Brunch may be the perfect program to build return audiences. Not everyone loves a diet of 100% cartoons week after week, but the live action trailers and short clips should spice up the menu and maintain interest over an hour as diners/viewers come and go throughout the show. That's the theory. I can test it myself by observing at the Suburban World starting next Saturday. (No brunch this week due to a special event.)

www.caferoxy.com
Posted by Ron Hall at 10:41 AM