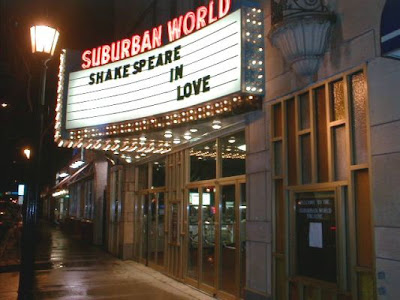 The Minneapolis Suburban World Theater, that I wrote about on Oct. 11, suddenly revived their Cartoon Brunch. The interior had been remodeled several years ago into dinner theater type seating with small tables in alcoves, and they have a kitchen as well as a full bar. Between 9am and 2pm every Saturday and Sunday the theater shows free cartoons on a giant movie screen while serving brunch. The new video projector gives a superb image.

The cartoon brunches began over two years ago. They were programmed and presented by my long-time friend David Mruz, who lives a block from the theater, and David got many of the cartoon DVDs from me. We even added serial chapters from "Undersea Kingdom" in an early attempt at what Café Roxy is programming now. The brunches became quite successful when some parent group mentioned in a newsletter that it was a great weekend activity where the kids could run up and down the aisles. It seems unlikely someone actually wrote that, but it's what David told me. The success was up to 400 diners/viewers each weekend, who all ordered food.

The brunches screeched to a halt when the kitchen staff was not increased to handle the demand. When you wait 40 minutes for an omelette you are not likely to return! The audience also died when summer came. There were problems with the films as well. Which disc was shown when? Most audiences don't want to watch an hour of Popeye, etc., at one sitting. Some had racial jokes. Many were copyrighted and should not have been shown in public. The cook ran the films. While I had attended one cartoon brunch, I live a half hour away and did not pay much attention to what David was trying to do each weekend. 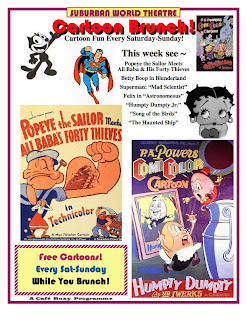 So the brunches are suddenly back! I went to the one today and talked to the owner, Don Driggs, about programming future shows. As I walked in, color Warner Bros. cartoons were playing from one of the Looney Tunes discs. They kept playing one after another, some good and some bad, but all color Warners. Don wanted more vintage cartoons, so he ran the sample show I brought that contained the cartoons listed on the first poster (shown on left).

I can provide a different poster each week for him to post on the Suburban World Website, and also to print out for his front door. I list the specific cartoons in each show so that repeat customers can be assured they won't see cartoons they saw at the brunch last month or even last week. This should make it easier for the projectionist! All cartoons are in the public domain and so are legal to show. All are top quality. None are duds. None have racial jokes. I alternate color with black and white cartoons. Each show has a few rare or lesser-seen cartoons like "The Haunted Ship," "Song of the Birds" and "Humpty Dumpty" on this program.

Because the average diner only stays an hour, I only include about an hour of cartoons and then repeat them to make up a two-hour DVD that the projectionist only needs to re-start twice at most.

Apparently we have a deal for me to supply future shows. Because it is a bohemian, trendy area, young people are always willing to try something new. The popular Uptown Bar, next door to the theater, closed last week to be torn down and something or other rebuilt in the spot. The Uptown served breakfast, so the Suburban World is ripe for success. Don's main challenge is to get free publicity in the form of a newspaper article or TV spot. We'll see what he comes up with.


www.caferoxy.com
Posted by Ron Hall at 9:18 AM