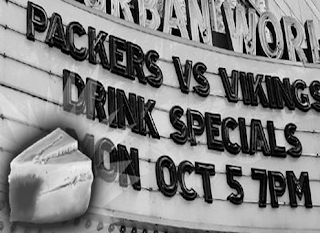 I stopped by the Minneapolis Suburban World Theater on October 5 to see what their video projection system looked like. Monday night football was running with the local Vikings beating the Packers. The picture looked awesome. Don, the owner, said the state of the art projector had been installed that afternoon. I may have mis-heard the price Don quoted so I won't repeat it. I don't want to discourage any future Roxy entrepreneurs from buying equipment. I know projector prices have come down in recent years while quality has gone up. State of the art, however, is not cheap, especially to project from the back of the theater. Let's just say the Suburban World's system is pricey.

Built in 1927, the Suburban World is truly a unique venue. Built in classic Granada Style, the Spanish facades and original stars still shine and clouds float by giving the effect of being in an open air Spanish courtyard. Originally called the Granada Theater, this historic building was designed by local architect Jack Liebenberg. His innovative design featured stadium seating in an atmospheric theater giving the illusion that viewers are seated outdoors in a Spanish courtyard. 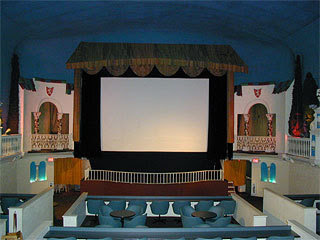 The photo of the screen on the right here is so clean that it almost looks like an artist's rendering, but it is an actual recent photo. Note the tables near the screen. The entire lower area has been transformed into dinner theater seating, while the raked rear section still holds traditional theater seats. A full bar downstairs center serves guests.

The theater remains much as it was when the Granada originally opened. Stars and moving clouds adorn the ceiling - making it appear as if it has no roof. Stucco facades of balconies, statues and plants further enhance the illusion. These features led the Minneapolis City Council to place the Suburban World Theater on a list of historically significant buildings in 1991. It is the only surviving example of an atmospheric theater in Minneapolis and one of few remaining in the state.

In 1954, the theater became known as the Suburban World Theater and it was during this period that extensive remodeling was completed. Wrought iron doors that adorned the front of the theater, as well as the lobby's iron chandelier, were removed and replaced by more modern fixtures. Further restoration has succeeded in restoring much of the original façade of the theater. 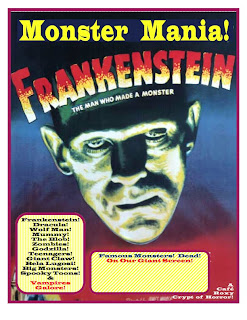 The Suburban World programming is in a state of flux, meaning I don't know their imminent future and neither do they! It hosts concerts by local bands, private meetings and parties, independent film festivals and a recent talk by liberal radio host Bill Press. A few years ago the theater held Saturday and Sunday cartoon brunches, which became extremely popular with the locals.

I would naturally like the World to show a few Café Roxy programs. I keep pushing, at the very least, for them to show Reefer Madness since the theater is in the hip Uptown area of Minneapolis. Charge $2 and make money off drink sales. This may happen and I will discuss the theater more if it does. Don did say he could use some Halloween "wallpaper" to run on the movie screen during an upcoming party or some event TBA on Friday, Oct. 30. Costumed party goers might watch some of the trailers some of the time, or just party through the spooky ambience.

So I put together two hours of classic horror movie trailers, including the public domain cartoons "Mad Doctor," "Wot a Night" and "Magic Mummy." The poster on the left features Frankenstein. I hope the theater runs the disc and discover that the old classic films are still fun today, or rather that "Trailers" for the old films are fun. The Monster Mania disc is for sale. Too bad it is too close to Halloween for me to find many buyers. If you know any bar, café or eating emporium in your area that will be open Halloween night -- send them my way!

www.caferoxy.com
Posted by Ron Hall at 10:36 AM