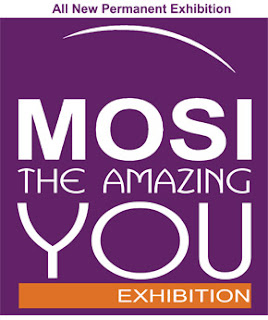 I just finished editing comedy clips that will run in an upcoming exhibit in Tampa, Florida called "The Amazing You." It will play continuously, I assume as part of a comedy segment. They requested 10-12 minutes as the maximum time a viewer might hang around to watch in the same spot. My first version ran over that at 16 minutes, but then I heard they might want 20 minutes, so I sent the 16 minutes, a 12 minute abridgement plus an extra 14 minutes of out takes in case someone there wanted to edit further.

This comedy montage is for the MOSI project, but I was not sure what that was until after I finished and finally googled MOSI. I found it to be Tampa's Museum of Science and Industry, and also found a link to The Amazing You, a 12,000-square-foot exhibition at which guests are invited to explore the developmental stages of life, from the beginning through adolescence. Part 1 opened in May, while Part 2 (that promises to be funnier) opens in November.

Dave Conley at MOSI first broached the project to me about supplying comedy clips and later about editing them myself. I thank him for trusting my editing ability when he had no such work of mine to look at. In fact, I have only been learning how to use iMovie on my MAC computer this year, and only got a DVD ripper last month so I can take film clips off DVDs to work with. Once you import a clip into iMovie you can delete fractions of a second and move clips around easily to see how each edit plays.

Dave's only requests were that all films be in the public domain and that I include Abbott and Costello's "Who's on First" routine because he always liked it. Fortunately the boys performed an exceptional version in a 1951 Colgate Comedy Hour that was never registered for copyright. The best version of the entire routine is on Youtube here. I excerpted four segments running 41, 31, 57 and 1:32 seconds and spaced them through the montage in order.

The rest of the film selections were mine. It was time consuming but fun to pull favorite clips, trim them to the absolute minimum running time, move them around so they flowed smoothly and then watch to see if I thought people would laugh today. This must have been the process Robert Youngson went through when he made clip classics like "When Comedy Was King."

Besides the TV "Who's On First," I included clips from Steamboat Bill Jr., The Boat, One Week, The Pawn Shop, Never Weaken, Stolen Jools, Flying Deuces, Road to Bali, Fatal Glass of Beer, The Dentist, Disorder in the Court, Beverly Hillbillies and cartoons Jerky Turkey and Betty Boop's Crazy Inventions. Looking at it from another perspective, the greatest slapstick comedians are included: Buster Keaton, Charlie Chaplin, Harold Lloyd, Laurel and Hardy, Hope and Crosby, W.C. Fields and the Three Stooges.

I was somewhat surprised by what I included over what I had expected to put in. In Fields' The Dentist, one first recalls the hilarious scene of the woman wrapping her legs around Fields as he tries to pull her tooth, but while editing I found the scene funnier when a piece of the ceiling falls into her mouth and she thinks he pulls out her tooth easily. "Why, it came out easily!" "Yes, yes it did. It surprised me."

I felt that splitting clips up from the same film was effective. For instance, Buster pulling his boat out of the basement and demolishing his house is followed a few clips later by Buster going down with the Damfino when the boat launches and sinks. Short jokes, quick laughs and on to the next clip. If an audience laughs the first time, then catches on that there will be more of the same later, they may well watch the entire montage. MOSI can of course edit out any clips they do not find funny. They may remove the 4 short clips from "Fatal Glass of Beer" where W.C. intones "It ain't a fit night out for man or beast." I thinks it's surreal hilarity, but someone who has never seen the film may not.

Youtube only permits films that are under ten minutes long, so here is a shortened version of my finished comedy montage minus the 4 segments from "Who's On First" that you can enjoy by itself. Have fun, and let me know if you laughed out loud!!!


www.caferoxy.com
Posted by Ron Hall at 9:37 AM