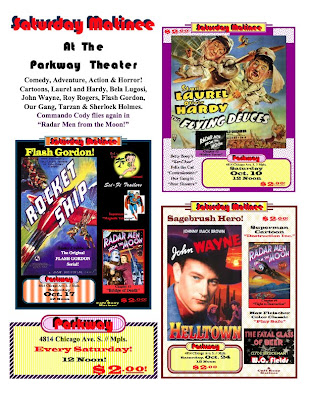 The first Saturday Matinee at the Parkway Theater ran smoothly this afternoon. Cutting to the numbers -- about 50 people -- but lots of positives. The theater decor has been spiffed up since I last visited over a year ago and shortly after it was acquired by Pepitos Restaurant. In particular all the seats are in and the walls have new mural paintings. There are some tables and chairs in the lobby, presumably for use by the beer and wine drinkers before or during an evening show. Currently playing at the Parkway is "Julie and Julia."

The video projection looked good, and that was my main fear since I had not seen a test run. The sound on the Betty Boop cartoon was way too loud so I ran up to the booth to alert the projectionist, except he was downstairs selling popcorn. That got worked out so the sound was booming but not too loud the rest of the way. Even the night scenes looked bright enough and there are plenty in "The Most Dangerous Game," which mostly takes place in a jungle at night. Showing DVDs in a small theater for 400 is more than viable. The black and white Popeye looked tremendous. Radar Men looked good.

The audience clapped after chapter 1 of "Radar Men from the Moon," and the cartoons. There were some young kids who came and went. Popcorn was sold. 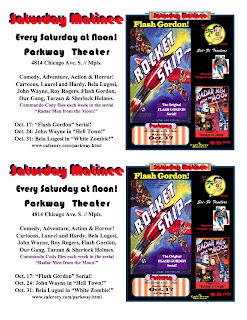 The Parkway did not get any free newspaper notices in various "What's Happening?" columns. The only notice I saw was the one they paid for on the page of movie listings: "SATURDAY FAMILY MATINEE SERIES. The Most Dangerous Game/Radar Men from the Moon/Toon favs Superman and more! All seats $2."

No TV coverage, which is not surprising. However, Return of the Saturday Matinee is the kind of story the media likes to report -- neighborhoody, cheap, different, historic, fun, etc., so I bet someone wants to do a story soon. That is my number one suggestion for promoting the show. In particular the free "Sun Newspaper" would be ideal to get a little article in since it goes to neighborhoods. That goal is being pursued.

My second suggestion is more posters. The poster at the top promotes the next 3 Matinees, and it will go in 3 comic book stores next week. The promo that splits into two half-page posters will be handed out at a big Twin Cities Comic Book convention next weekend, which is why it promotes Flash Gordon in the third week. The Parkway needs to get poster/flyers in 2 coffee houses only a block away, and in the Used Book Store might help as well.

Next Saturday is Laurel and Hardy, who have been phenomenally popular in the Twin Cities for decades, so if we can only get the word out...