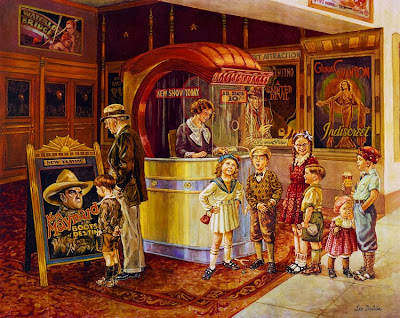 Several observations unexpectedly merged into a new project this week. Some parents attending the Parkway Theater Saturday Matinee brought very young children, pre-schoolers who looked to be 4 and 5 years old, to see Flying Deuces. I'm sure they enjoyed the cartoons in a theater setting. I hope they laughed at Laurel and Hardy and who knows what they made of the serial? The point is, we had parents who wanted to introduce their kids to the vintage films but the show wasn't quite right for the extremely young. They surely won't be back for John Wayne or White Zombie, but maybe for the Our Gang / 3 Stooges festival that follows or for Gulliver's Travels.

On Monday Bob DeFlores offered to put up a Matinee flyer in a library where he had presented a jazz program and so he knew the program director quite well. Libraries are busy these days because the economy has driven families to seek free entertainment. Most libraries do give regular special programs in all-purpose meeting rooms that happen to be equipped with video projection. Library budgets keep getting cut, but the "Friends of the Library" parent group helps fund programs they feel are worthwhile. Bob had been paid $100 to introduce and present his jazz show. A Café Roxy show goes for $25, which is a library bargain.

Duh! An idea at last -- a Café Roxy series tailored to the special needs of Libraries. Thus was born Matinee Jr. 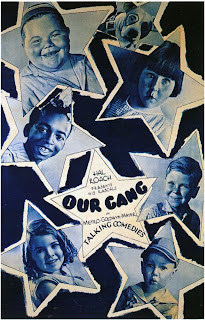 We felt library programs needed to be a short and snappy 65-75 minutes long. The solution for attaining that is ... drop the features! Shorts only. The idea was modified to abridge some features with an onscreen note such as: "Many Matinees included westerns. This excerpt from a Roy Rogers western gives a taste of the action and fun." This will allow the inclusion of John Wayne, Gene Autry, the Three Mesquiteers and obscure comedians like Joe E. Brown and Wheeler & Woolsey. Libraries don't have time to show features but excerpts will entertain and educate just as well.

Since all Library Matinees will be free shows, I will edit and abridge where needed to make each show educational, fun and family acceptable by deleting any racial content. The fun part is easy. The educational part is explaining in an opening montage what a Saturday Matinee was. While I dislike censoring innocent stereotype material, it is simply necessary because you can't expect young kids to understand and you don't want to offend anyone in a public library. It also easy to do without destroying a short. For instance, I cut a brief scene in the Our Gang "School's Out" where Farina salivates over eating watermelon. That's a stereotype that might offend today no matter how innocent in 1931. In the rest of the short Farina is just one of the gang and good friends with Chubby, Mary, Wheezer and Jackie Cooper. 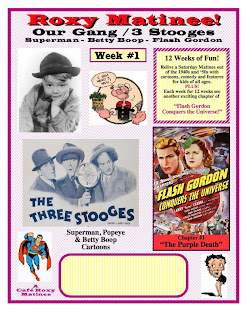 We picked "Flash Gordon Conquers the Universe" as the best serial because of the science-fiction adventure, sets, spaceships, costumes, villain, and also because it has less fist fighting than a typical serial. Each chapter runs 20 minutes. Should five minutes be cut out of each to accommodate short attention spans?

The first response from Bob's library contact was great enthusiasm for the idea and the low price. They saw the value of reviving a lost chapter of popular culture -- historical, educational and, yes, still entertaining. One concern was that they could only run one show a month because of other programming commitments. That is OK with me. Run the first four shows one a month and schedule them more often if there is demand. Other libraries might be able to schedule a film show in every Saturday at 10am, noon, 2pm, or sometime.

The next step was to create a Sample DVD for libraries. Done! Like the Roxy Sampler, I will send a free DVD Sampler of Matinee Jr. to any interested Libraries. You can view Matinee Jr. excerpts that includes the library pitch, comedy and cartoon scenes, a chapter ending from Flash Gordon and a trailer for Gulliver's Travels. This is followed on the sample disc by 7 minutes from "Popeye the Sailor Meets Sindbad the Sailor," 9 minutes from Our Gang's "Bear Shooters," 7 minutes of the color Abbott and Costello film "Jack and the Beanstalk" where Lou first meets the giant, and the last 8 minutes of Roy Rogers' "Heldorado."

Onward to plan the shows, design 12 posters, tailor shows to the local library time and content requests, learn how to reach libraries all over the country and... onward!

www.caferoxy.com
Posted by Ron Hall at 8:19 AM