Counting Down to Next Saturday! 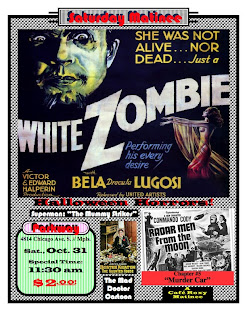 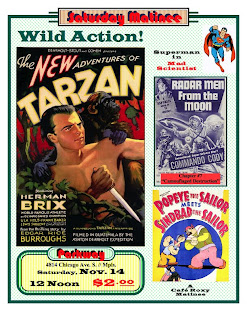 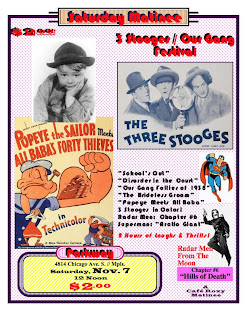 One week from today the Saturday Matinee series starts at the Parkway Theater. It's been a quick learning experience preparing shows which will actually be seen by an audience in a 400-seat theater, and helping promote the series at the same time. Since last week.... 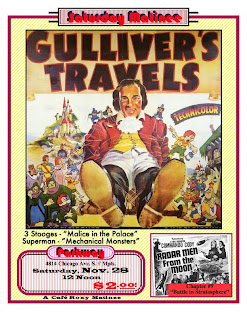 Program Changes. I replaced the Kid's TV Show (that did not really fit with Matinee fare) with Gulliver's Travels, as you can see by the new poster. I moved White Zombie to Halloween and added the Buster Keaton short "Haunted House" to the same show for obvious reasons. You can see all 12 posters here.


Trailer for each week. I already had theatrical trailers for Ghosts on the Loose, Gulliver's Travels, White Zombie and House on Haunted Hill. I created "Coming Next Week" trailers for the others. Flying Deuces contains the song and dance number "Shine on Harvest Moon," a few shots of the boys flying wild and appropriate "Coming Next Week" words over the pictures. Terror By Night, New Adventures of Tarzan and Rocket Ship also contain scenes from the films. John Wayne, Roy Rogers and 3 Stooges / Our Gang shows are composed of stills or movie posters with music and "Coming Next" blurbs.

Press Release. I wrote one up as shown on the left below. You can read it full size at the new Press Release Page. Also at that page is a sheet of Free Passes. Pepitos will give out a limited number each week to those who eat in the restaurant. A poster inside the front door and at the cash register tells them to ask for passes.

The publicist for the Parkway is sending out normal releases to newspapers and TV station. We are hoping one will see the "Return of the Saturday Matinee" as a news item worthy of additional coverage. Film clips are available to TV stations, who like to promote new, fun and family activities. 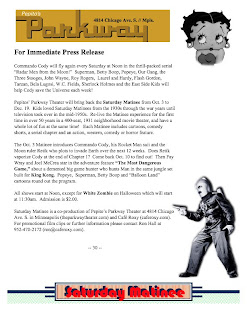 Radio Discussion. This past Wednesday Bob DeFlores talked about the series for more than a half hour on the educational channel KFAI-FM radio. Bob had already been scheduled to talk about a Ginger Rogers series at the Heights Theater and was happy to have more to discuss during the hour and a half he was on. Bob was so good I wanted to go. Although that promo was ten days before the first show, KFAI plans to discuss the Matinee series each Wednesday since they have a good history with the Parkway. The Parkway has supplied food for KFAI fundraising drives and a benefit jazz show will be staged this fall in the Parkway.

Series Trailer in the Theater. Just yesterday I thought to give the Parkway a trailer for the series that they can run before their regular features. This is very close to the Trailer already accessible from the website. I gave them two versions on DVD for video projection -- one with and one without the Giant Claw Trailer. I was happy to hear that whenever they plan to project DVD shows, the projectionist runs it in advance and watches every single second to make sure the disc will not freeze.

Thanks to Tracy Tolzmann for plugging the series in the Laurel and Hardy club announcement for the October 5 meeting. 350 movie fans got the newsletter only yesterday. Some must live in South Minneapolis. Some might want to see Flying Deuces for the tenth time, but this time in a movie theater with a live audience. Hmm, does that mean "Blockheads" audiences are zombies? In the spirit of the club, Who Cares!?


www.caferoxy.com
Posted by Ron Hall at 8:14 AM