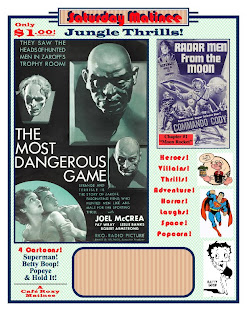 Last Saturday I got the idea for a series of 12 programs that duplicate a Saturday Matinee from the 1940s and '50s. This would seem like the most natural series of all, and yet it is the 7th Café Roxy series arranged around a serial (Radar Men From The Moon this time). The first series were aimed at coffee houses, where I felt the shorts in the All-Star Series might work well with people coming and going throughout, or at film societies who might want a Horror Series or Film Noir Big Crimes, or at western-themed bars who might like to try Sagebrush Sagas. Next came the Golden Turkeys and companion Turkeys in Space, which are aimed at fans of "Mystery Science Theater 3000" or adventuresome 20-year-olds looking for something new to do at night (watch old but fun films like Reefer Madness while eating and drinking).

Then I started getting inquiries from movie theaters who wanted actual shows tailored to their audiences. This led to the recently started and far, far from finished Just Classics, that do not contain serial chapters but do have a cartoon, short or trailers before such features as His Girl Friday, D.O. A., The Stranger, Angel and the Badman or even single films like Little Shop of Horrors that are also included in one of the series. I am all for reviving classic films in theaters and love spicing up the programs with shorts. However, classic revivals have been around for years and are not likely to attract special press coverage.

Saturday Matinees were in theaters through the 1950s, but were pretty much a forgotten footprint in history until "Matinee at the Bijou" became a hit PBS series in 1980. Bijou combined a B-feature, cartoon, shorts and serial chapter each week, introduced by a host or film montage and closed with Rich Mendoza's snappy song "At the Bijou" as sung by Rudy Vallee:

"The movies were speaking; the market was peaking. We lived off the fat of the land. But the banquet was ending, a plague was descending, the day of the locusts at hand. But at the Bijou bitter gall became as sweet as brandy, and humble pie turned into cotton candy. America was standing in bread lines, Dillinger was stealing all the headlines, but down at the Bijou people said lines like Boop Boop Be-Doop, Boop Boop Be-Doop. Thru the dust bowl the black winds were wailing, the rivers were rising, Ohio was bailing, but little Shirley Temple always had clear sailing on board the good ship Lollipop. Andy Hardy never had to go hungry. There was no bank panic at Tarzan's branch. Il Duce and the Fuehrer couldn't have been obscurer on the Planet Mongo or the Melody Ranch."

Because I am part of the Bijou Team that is working to both get the original episodes back on TV and produce a new series in hi-def, I had subconsciously avoided a matinee series. I didn't want to appear to "borrow" the format or look like a branch of Bijou or in any way confuse TV networks we approach. Of course no one would notice unless Café Roxy becomes a hit around the country and Matinee at the Bijou gets back on TV, both of which would be nice. Because Roxy Saturday Matinees are planned for movie theaters and Bijou is a TV series, I now feel that success in either venue can only help publicize the other. The main goal of both ventures is to get new audiences to watch and enjoy the vintage films. We are confident they will love the films either at home or in theaters. I hope to test the idea very soon in a local Twin Cities movie theater, so stay tuned! 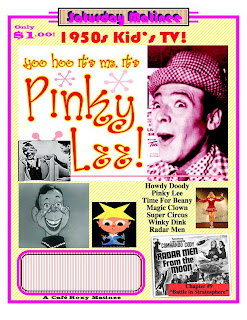 The Saturday Matinee programs fell into place remarkably fast and I finished the 12 posters the next day! I had long wanted to put The Most Dangerous Game into a series but did not have enough good adventure films for a series of 12. I had wanted to use the Laurel and Hardy's Flying Deuces but did not feel other vintage comedies would have as much appeal today. 12 weeks of matinees should above all have variety from week to week and not be limited to any one genre, so there are John Wayne and Roy Rogers westerns, comedy, horror, sci-fi and Sherlock Holmes. I repeat a few shows that are in earlier series -- House on Haunted Hill, White Zombie, Rocket Ship and Ghosts on the Loose. One show does not belong -- the 1950s Kids TV -- but it's really fun, I would like to see it with a theater crowd and it sure adds variety. At this point it can be removed because the shows have not been put together yet. 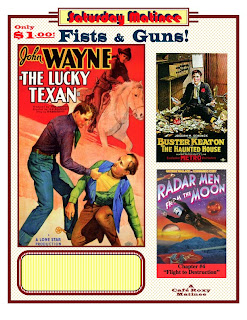 The 12 programs advertised on 12 posters are not set in stone. Only The Most Dangerous Game program is finished. I will work with the first theater who runs Satuday Matinee to create the best possible line-up even if it means altering a few shows or shuffling the order.

The posters currently say $1.00 admission. My first thought was to offer "Free Admission" and make money off concessions, but a small charge seems appropriate for a theater. Everyone in a bar or coffee shop is likely to buy food and drink, but theater-goers can sneak the eats in or go without. My thinking today is to charge $2.00 instead of $1 since $2 sounds like a pretty good bargain. It also allows any restaurant or coffee house next to the theater to give away free passes, which can increase business at both. I can change the price on the posters to customize them for whatever specific theaters desire.

I predict that every theater who is the first in their city to revive the Saturday Matinee with B-pictures, cartoons and a serial chapter will get a lot of local publicity.


www.caferoxy.com
Posted by Ron Hall at 8:26 AM