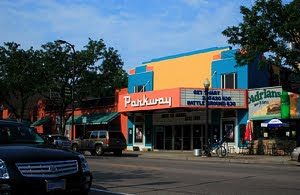 Just two weeks from today on Saturday, Oct. 3 at noon, the Café Roxy concept will get the ultimate test under ideal conditions. I should say the test will begin, because the results won't be in until several weeks into the 12-week run of Saturday Matinee. We plan to promote the "Return of the Saturday Matinee" to the hilt. The "We" besides myself starts with my long-time friend and associate Bob DeFlores. Bob has been helping me find a local coffee house to debut Café Roxy but instead won the jackpot -- his friend Joe Minjares who owns both Pepitos Mexican Restaurant and the adjoining Parkway Theater.

The Parkway Theater opened for business in February 1931 and has been operating as a neighborhood cinema ever since. Although originally designed with a Spanish Mediterranean exterior, for reasons unknown it was erected with a deco modern facade which was revealed in the summer of 2006 when Joe removed the metal facing covering it installed in the 1950's. For the last four decades the Parkway Theater was owned and run by Bill Irvine who took the reins in 1972 and brought it back from the clutches of an adult film venue and turned the Parkway into one of the finest independent and offbeat film venues in the Midwest. So, now it's Joe's turn to add to the long legacy of the Parkway Theater, one of the last single screen movie houses in the Twin Cities. The theater presently has 360 set auditorium seats and 20 movable two person love seats for a total seating capacity of 400 guests. 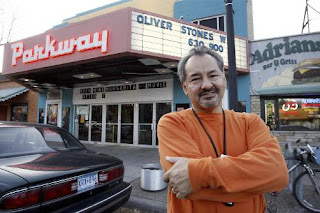 The Minjares family first came to the south Minneapolis neighborhood at 48th and Chicago in 1971 when they bought the Colonial Inn restaurant and changed it to Pepitos. The Colonial had been in business since the early 30's serving 3.2 beer, hamburgers and pizzas in what had been a turn of the century hardware store.

Joe Minjares caught the acting bug and has had many character roles in films and TV. Read his credits at IMDB, where his mini-bio notes: Was born in Minneapolis Minnesota to Guadalupe and Benjamin Minjares. Served in Military from 1964 to 1968 with the U.S. Army intelligence corps. Founder of Pepitos Mexican Foods inc. 1971. Began acting career in 1982 in the movie Patty Rocks. Won the 1984 Minneapolis Comedy invitational as a stand-up. Worked on Stage in several productions at the Mixed Blood Theater in Minneapolis. Was a regular at the Comedy Store and Improv in Los Angeles. Worked as a Staff writer at Universal Studios on the "Tom" show.

So Bob got me together with Joe only this past week and Saturday Matinee is both a GO and is already being promoted at Parkway Theater Site. Just scroll down the home page to Saturday Noon Matinees. Then clicking "View Trailer" will take you to my poster page showing all 12 matinee programs. From that page there actually is a trailer posted at Youtube that promotes the series. 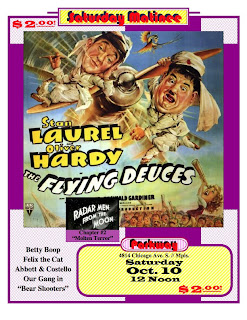 Because it is a 12 week series we anticipate newspaper and television coverage. We may not get much before the first show, but if it is as successful as we hope then the story gets bigger. It would be great to see a TV camera crew drop by some Saturday to film a line of kids. Yeah, we dream a lot. Last week I wrote: "I predict that every theater who is the first in their city to revive the Saturday Matinee with B-pictures, cartoons and a serial chapter will get a lot of local publicity. Crowds will build." I never expected I would find out myself so quickly if this is true.

I do expect the promotion currently in place will attract an audience. The poster on the right will be up in Pepitos windows and by the cash register a week before the second show on October 10. My poster question "If you post it, will they come?" is no longer rhetorical. (The debut show on Oct. 3 remains The Most Dangerous Game, and that poster is in last week's post.) Pepitos also plans to give away 50 or so free passes each week to their regular diners. Admission is only $2, but the theory is that a Free pass will encourage coming, and bringing a couple of kids along to see what the movies used to be like on Saturday afternoon.

The bigger test for Café Roxy and Saturday Matinee is whether audiences will enjoy the shows today. Will more come each week? Will the theater fill up? Will a second show be added in later weeks at 2:30? Anything can happen.

Check back to find out!

www.caferoxy.com
Posted by Ron Hall at 8:13 AM