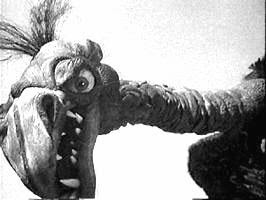 Meet the Café Roxy mascot -- The Giant Claw! Here's the chance of a lifetime for any T-shirt or coffee mug maker. I'll buy one! You need to make a deal with Columbia Pictures first to use the image. Columbia owns The Claw, and I bet they are proud, so the feature will not appear intact in any Roxy program. Fortunately, coming attraction trailers to older films are in the public domain so it can grace any Roxy program.

Yes, there is actually a short story in my discovery of The Claw's true nature only a week ago.

It starts with the trailer, which I had for some years on a DVD full of trailers. I either hadn't watched it or didn't realize how great it was when I mailed it to Bob Campbell to put in a Bijou Blog Mini-Matinee. (Side note: I am part of the team that will bring Matinee at the Bijou back to TV soon. More on that in a future blog.) The trailer went up on Youtube in July, 2008, and has been viewed there more than 49,000 times! That may be a thousand times more than the feature has rented out from Blockbuster. 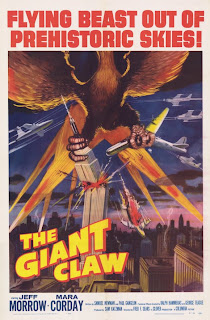 THE GIANT CLAW Trailer (1957)
This very campy trailer features many terrific action shots of one of the fakiest-looking monsters ever manifested for the silver screen. A giant ugly and laughable prehistoric bird is eating people and planes, threatening New York and even the U.N. – while every weapon the U.S. military attempts has failed to foil the giant puppet. My favorite part besides every shot of the monster is the line: "That bird is extraterrestrial. It comes from outer space, from some god-forsaken, anti-matter galaxy millions and millions of light years from the earth." How could the scientist know? How could anyone know it was 17,000,000 years old like the trailer claims?

Columbia knew they had a turkey movie on their hands. They knew it was so bad they could not show the monster on the movie poster or no one would come to see it. In the tradition of keeping Lon Chaney's Phantom face off those posters to fuel audience imagination and... Forget that. They just couldn't show the Claw, so all the posters leave off his head! Excuse me, It's head. 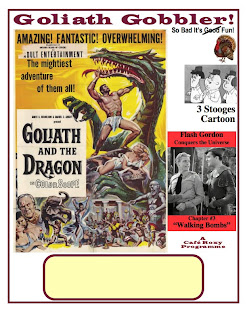 When I was putting together Golden Turkey show #3 with Goliath and the Dragon, it struck me that the dragon was one of the lamest monsters ever (in an otherwise pretty decent muscleman epic), except for, perhaps... The Giant Claw. So I wanted that trailer for the same show. My Bijou associates had somehow restored the trailer for Youtube so it looked better than the DVD I still had. They sent me their MP4 file of the video, which I added to the Goliath show.

Two weeks ago I made a promo video promoting the Golden Turkeys series and put it on the Roxy Youtube channel. You can watch that promo here. The promo both advertises the series to any theaters, cafés, etc., to run the series and can also be used on their website to advertise it to their customers. The promo concludes with The Giant Claw Trailer, so for a good laugh go take a look.

Ten days ago I posted the Trailer on Face Book because I had the MP4 file on my computer and wanted to see how easy it was to post a video on Face Book. It is. Comments I got back were:

Cliff Weimer -- If this isn't the greatest bad movie of all time, it's one of the top ten, in the pantheon reserved for PLAN 9, ROBOT MONSTER, and other great cinematic accomplishments. 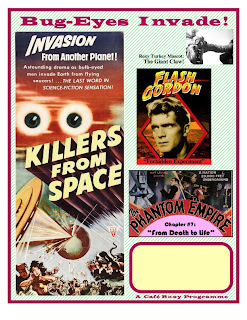 David Mruz -- Ron, you are right, this is all one would want to see of ''the Giant Claw''. Most of the time 50's Sci-Fi trailers were more exciting than the actual features. I remember many Saturday afternoons at the movies being totally disappointed that features never matched the excitment of the''Coming Attactions.'' One of the worst disappointments was ''the Angry Red Planet.'' I remember that the William Castle Films were as good as the trailers were most of the time !!!

Ken Fletcher -- I saw this in a small town movie theater in Tennessee as a kid. This is the one with the giant bird thing soaring down on the 'bad' teenagers speeding in the hotrod? Lots of cheering for the teenagers in the theater.

Naturally I had been thinking of the Giant Claw feature as a "turkey" in the sense of a very bad film with laughable special effects, so bad as to elevate to the lofty plateau of being "So bad it's good!" Was I surprised when I uploaded the trailer to Face Book. The procedure gave me a choice of 8 still frames to accompany the post. One of them was this frame on the left that comes at the 2:32 mark of the Golden Turkey promo you have probably watched by now. In that single frame I finally noticed the Giant Claw's true nature -- it actually, really, honestly is a Giant Turkey!

Which makes him the Roxy mascot.


www.caferoxy.com
Posted by Ron Hall at 7:37 AM