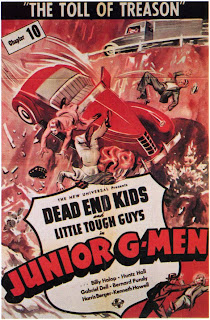 I vividly remember the first movie I ever saw as a child of five. It was 1951, just before the TV era, and I had never seen a moving image on TV or a movie screen that I recall. I remember the screening because I was scared to death -- by a deep fear of death -- that I have not felt since that formative summer. I covered my eyes to avoid seeing my onscreen heroes meet a certain and violent death. I really believed they got killed! Every week. First in a crashing elevator as they battled two baddies; the next week in a building that exploded. They didn't even know dynamite had been planted so how could they possibly get out? One week their car went over a cliff and crashed. Later they were trapped in an abandoned building that was blown up, and that looked absolutely real. In fact it was a real demolition. I would not become savvy to stock footage or editing for a few years. Who could, when they were seeing their very first movie ever?

Who got killed every week? Billy Halop and Huntz Hall in the Dead End Kids serial "Junior G-Men." I must have figured out the heroes never die after the last chapter of Junior G-Men, but I still remember where the movie screen was -- at the south end of the park where they set up the ferris wheel during the yearly carnival -- what kind of park bench I was sitting on -- green, slatted -- and peaking through my fingers as the elevator cable broke.

My family had just moved to Deerfield, Wisconsin where my father became the town druggist. Deerfield was a small farming community, population 610, located 25 miles east of Madison. We lived above the drugstore, between the bank and the grocery store, on the single block of retail stores. In our back yard across the street was a large expanse of park several blocks square that encompassed a baseball diamond with bleachers. There was no movie theater in town, but some enterprising gypsy had developed a livelihood whereby he brought in an outdoor movie show once a week during the summer. He set up his own screen and sound system and two 16mm projectors. He took the same show to neighboring small towns Sun Prairie, Cottage Grove, etc., on different nights of the week. Is there a word for this forgotten form of small town exhibition?

The showings were FREE MOVIES in the park. Hmm, reminds me of Café Roxy and how entrepreneurs today can....

The local merchants banded together to pay for the show. Their purpose was to bring all the farmers into town on Thursday nights so they could shop until it got dark enough to show the movies at 9:30. My parents even bought a popcorn machine. (One batch with rancid butter made me sick and I didn't eat popcorn for years.) The next morning I would roam the park with my red wagon collecting pop bottles to redeem for 3 cents apiece at our own drugstore or the grocery store that sold Nehi. Glass quarts fetched a whole nickel! My mother insisted I take a "nap" in the middle of the day or I could not go to the movies. I never quite forgave her. After all, if I fell asleep during the films, so what's it to her? 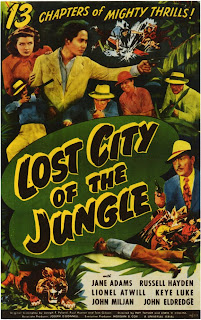 Anyway, 12 weeks of movies was a perfect venue for 12 serial chapters! What better way to get folks back every week? (It worked then and it can work today in your Café Roxy.) A later serial I recall fearing in the park was Lost City of the Jungle, mainly because of the scary revolving idol that closed out every episode behind the message: "Next Week Chapter 5, Fiery Danger." The idol was in a secret room in the lost city. Anyone who entered would step on a lever that unleashes poison gas in the room. They die. The hero enters and steps on the fatal step. Gas enters. The idol revolves. He stumbles and falls. Continued next week!

The free movie shows continued year after year through the 1950s. The location of the screen moved around and eventually was set up on the baseball diamond. That's where I recall seeing Destination Moon and The Mole Men. I don't really have a good memory. There was Francis the Talking Mule in a Haunted House and... what else? I do remember the serials and their smashing chapter endings for Gang Busters, Mystery of the Riverboat, Junior G-Men of the Air, The Black Widow and more. I don't recall the end of the park showings or if they were still going when we moved to Madison in 1961. I had certainly outgrown the thrill by then or replaced it with TV and movie theater showings.

Today babies are plunked before TVs the week they come home. It is doubtful that many remember the first films they see in a theater. Through a unique circumstance, I recall the first film I ever saw -- not a great serial but oh, so scary. Thank you Junior G-Men and the main street merchants in Deerfield, Wisconsin!

www.caferoxy.com
Posted by Ron Hall at 8:26 AM