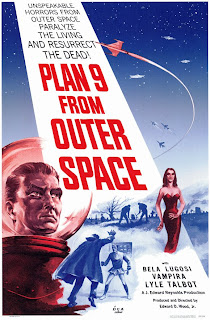 The first Bela Lugosi movie I ever saw was Return of the Vampire, that strangely turned up on Madison TV one afternoon in the mid-1950s. I have never had the chance to see it again, which is also odd. The second Lugosi film I saw was the thrilling sci-fi/horror film Plan Nine From Outer Space. I was probably the only kid in the world who reacted the way Ed Wood dreamt we would.

This reaction sticks in my memory because I had not seen many horror films to that date -- 1959 -- and I snuck in the viewing behind my parents' backs. I was 13 and should have been more savvy as to what a good horror film was, but they just never showed much on TV. No King Kong, no Universal horror package, no nothing. I had seen Destination Moon, early TV space epics Flash Gordon, Space Patrol and Rocky Jones, but few real horror films. My parents would not allow it. I also could not watch TV late at night in case anything had been on. I had discovered "Famous Monsters of Filmland" about the same year, and had read glowing reviews and seen stills of Plan Nine. Forry Ackerman wrote about Ed Wood like he was Alfred Hitchcock for kids and probably went camping with Tor Johnson!

I doubt Plan Nine opened in local theaters or drive-ins, which I could not have gone to anyway. It went straight to TV shortly after it was made and I am guessing that same year, 1959. We had terrible TV reception from a roof-top antenna 25 miles from the Madison station or sixty miles from Milwaukee, so the saucers did not resemble tin pans on strings. Fans of the film today, and I am one, will admit it has plenty of energy, moves right along, indeed has Monsters and flying saucers and a lot of sincerity. So that is what I responded to, primed by Mr. Ackerman that this was a "good" horror film, and aided by the fact I was watching it alone and barely able to see what was going on. Later reviews and viewings reveal the film's true camp status as the "World's funniest bad movie." 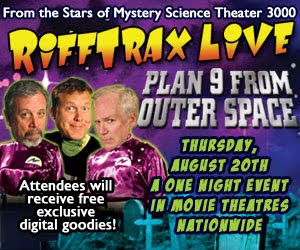 The classic returns -- this week! Live, in over 400 theaters across the country! Thursday night, August 20! Read all about it!

Join Michael J. Nelson, Kevin Murphy (Tom Servo) and Bill Corbett (Crow T. Robot) from Mystery Science Theater 3000, now of RiffTrax.com, as they are reunited in HD for the first time ever on the big screen! This event will feature the world premiere of a brand new, never-before-seen short and non-stop hilarious riffing on a COLOR version of “Plan 9 from Outer Space”- a 1959 science fiction/horror film written, produced and directed by Edward D. Wood Jr. This one night event will be broadcast LIVE out of the Belcourt Theater in Nashville, TN into your local movie theater. Don’t miss an exciting evening of LIVE riffing, zombies, aliens, cheesy performances, wisecracks, laughable special effects and more!

Details are at the site link above ... oh, heck, here is the link again ... including a list of over 400 theatres that will carry the event.

This event bodes well for present and future Café Roxys. Whether or not the RiffTrax show is well attended and a crowd pleaser, there will be lots of promotion this week over an old movie shown in movie theaters that can be enjoyed by audiences. The Twin Cities Star-Tribune already printed a plug, and will doubtless run a feature story on Thursday because Mystery Science Theatre 3000 was produced here. Similar publicity awaits any bar, cafe or theater who embarks on regular (and successful!) showings of old films. Classic revivals are no longer common and so will be news wherever audiences discover them. 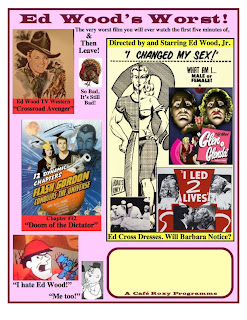 Plan Nine in theaters also coincides with the release of the Roxy Golden Turkey series. I am saving Plan Nine from Outer Space for the sequel series "Turkeys in Space" or some name like that, where it will be shown in "Original black and white! No jokes on the sound track!" However, three Ed Wood Turkeys are included -- Jail Bait, Glen or Glenda and Crossroad Avenger. In case any venue is reluctant to show the (mind-boggling hilarious) Glen or Glenda with its transvestite and sex-change themes, I am including as an alternate 12th show the insipid Santa Claus Conquers the Martians.

What is Crossroad Avenger: The Adventures of the Tucson Kid one might ask? In 1953 Ed Wood tried to get into TV production with this pilot western starring B-western cowboys Tom Keene and Tom Tyler, plus Lyle Talbot, Glenn Strange and Kenne Duncan. Keene and Talbot also show up in Plan Nine while Duncan stars in Ed Wood's Night of the Ghouls. A viewer comments from IMDB: "Tom Keene looks tired, as does half the cast of this half-hour TV pilot directed and written by the infamous Ed Wood, Jr. It is crudely produced, with typical terrible Wood direction. Ed Wood can be an interesting writer, but his direction is awful by any measure, and it shows even in this tiny prairie saga."

The western is last on the program after the feature (either Glen or Glenda or Santa Claus) and is preceded by the recommendation to go home early or go get a drink. I expect more will actually stay to watch the entire film after they have been warned not to do so, but they will live to regret it and have something to talk about on the way home.


www.caferoxy.com
Posted by Ron Hall at 7:38 AM