In the oven -- Golden Turkeys

Eagle Theaters are two independently owned and operated movie theaters in Illinois, the Eagle in Robinson and the Clintonia Eagle in Nearby Clinton. The manager has ambitious plans for showing many Café Roxy programmes off hours either for free or for .25 admission charge. He figures the "old-time" price of a quarter will attract more attention than free. Eric explained to me that many theaters have been using DVD projection for years, primarily for those pre-show ads for local merchants that are often mixed in with quizzes and other time killers.

Eric plans to try matinees for children and late-night horrors first and bought the All-Star Variety Shows and Horror Series. He envisions his theaters as places to hang out, have a fun time and let the kids run around, all for free under the assumption they will eat and drink a lot. I will update on audience reception once the shows commence in the fall.

Interestingly, Eric got the idea to show public domain films himself and found Festival Films through a web search. The FF website has been up for years and does turn up in search engines looking for public domain. I quickly turned his attention from public domain films offered at fesfilms.com to the public domain programs I offer at www.caferoxy.com. I find most new customers by them finding me on the web. I just added a new link for Movie Theaters on my fesfilms home page to better explain the advantages of public domain to any managers who might drop by. 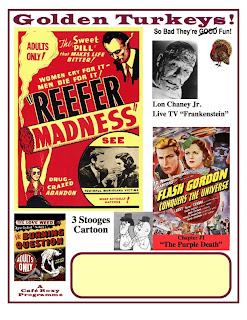 Eric also suggested a series of Bad Movies. Now why didn't I think of that!? I'm hard at work on the first series of 12 Golden Turkeys. What's cooking at Café Roxy? Turkeys are in the oven, so to speak, and will be served soon. These shows are more fun for me to put together than all the others, so I expect they will be just as much fun to watch with an audience. Two posters are shown here.

Reefer Madness, I believe, invented the concept of "Campy" films in the 1970s revival. Audiences flocked to enjoy a film that was "so bad it was good." I was in one of those packed audiences. While I enjoy many camp films more, Reefer Madness is a perennial favorite with more name recognition that His Girl Friday or Meet John Doe. Although out on home video for years, it is only funny with an audience and should be even more fun as part of a program. Frankenstein is the infamous live TV show in which a drunken Lon Chaney thought he was going through a dress rehearsal instead of the actual show. At one point he picks up a chair to smash it, then carefully replaces it.

Each Golden Turkey show will feature a chapter of "Flash Gordon Conquers the Universe" serial, which is by no means a turkey in the world of serials. Of course to viewers who have never seen a serial, it could well elicit laughs because of the costumes, melodramatic dialog and silly spaceships. A lively audience who expects to see terrible movies is likely to laugh at anything. Let them! That's the idea. If the action and heroics grips them like it once did, that's great too, just so they have fun. 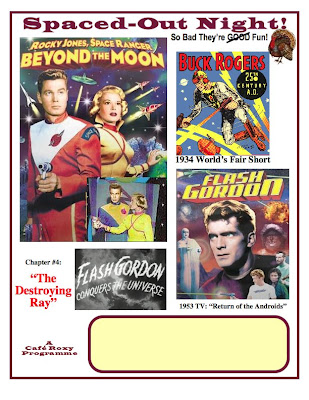 Rounding out each show will be trailers for bad films, TV shows and episodes of the New Three Stooges that mixes live-action and color Stooges skits with rather atrocious but short cartoons.

I have a hunch that Spaced-Out Night will become one of the most popular Café Roxy shows. The Buck Rogers 1934 short is perhaps the all-time campiest ... film? ... well, it was committed to film and shown in 35mm at the 1934 Chicago World's Fair. "Return of the Androids" is one of the lesser seen episodes of the 1953 Flash Gordon TV series that was filmed in Germany, and has an appropriately bizarre design. The show makes a nice comparison to the better produced Flash serial from 1940 as well as to the 1954 American TV show Rocky Jones Space Ranger.

Most Rocky stories were first shown in 3 weekly episodes, but were later re-edited into "features" like "Beyond the Moon," which was the first in the series. I edited just a bit out of Rocky Jones, but doubt it will be missed. You still get plenty of toy spaceships taking off, landing and docking at the space wheel station. For those who want it all edited out, please exit during the opening credits!

www.caferoxy.com
Posted by Ron Hall at 9:05 AM