My favorite Christmas song is "The Christmas Waltz," written by Sammy Cahn and Jule Stine for Frank Sinatra in 1954. It became the back cover song for Frank's new version of White Christmas. It may be my favorite since I don't hear it that often, yet it has been recorded by dozens of pop artists. I also can never recall the lyrics in full so I put down the first chorus here to aid future memory lapses: 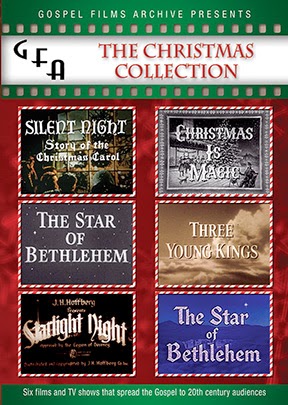 And this song of mine
In three quarter time
Wishes you and yours
The same thing, too

GFA Christmas Collection DVD
We produced this superb collection of rarely seen Christmas shorts and released it two years ago as Heavenly Christmas Film Classics. However, the team forte is acquiring and releasing rare films; it is not in marketing them properly and so sales to date were slow. This year everything has changed with the new DVD cover, new menu on the DVD, new promo video (just below) and most importantly massive marketing by our distributor, Vision Video, who I believe is the largest distributor of Christian Videos in the world. Vision Video has an extensive printed catalog mailing as well as website where they list our other DVD releases and they supply to numerous third parties. Buy from Amazon.com if more convenient.

I am delighted to explain my 3-way partnership with the rest of the GFA (Gospel Films Archive) team. Bob Campbell is the driving force who makes and expands new contacts in areas I would never seek myself. Bob produced the original Matinee at the Bijou series on PBS in the 1980s - a big hit! Bob is working to bring back to the public these vastly overlooked and pretty much lost Christian films that were shown in churches, on TV and for missionary work in the 1950s-1970s. Bob forged the alliance with Bill Carroll and Bill Curtis at Vision Video and is pursuing TV possibilities.

Bob arranged a large donation of GFA films from Paul Marks of the former library of Visual Aid Center. Paul is currently the Director of Operations of the International Christian Visual Media Association. Another invaluable ally that Bob befriended is Kirk McCrea, who works with the Salvation Army in Ypsilanti, MI. I re-print Kirk's Christmas message below the video.

Our second partner is Derek Myers, who is a producer and tech guy at a Christian TV station (WGGS TV-16) in Taylors, SC. Derek houses the 16mm GFA collection, does all our video transfers and voice overs for any needed preview videos. He is just finishing transferring the donated films from Paul Marks, and we are expecting another large donation soon.

Both Bob and Derek are devout Christians. I was raised Lutheran and then Baptist in high school, but while I try to live my life by those teachings I do not attend any church. So at times it feels odd devoting time to Christian videos, but I can assure one and all that these are for the most part professionally made, highly entertaining short films that richly deserve to be restored to the public. One I watched recently -- And Then They Forgot God -- is a sci-fi film set in the future with a shock ending worthy of the Twilight Zone ... and I couldn't figure out what it had to do with religion at all. I guess a warning that some future utopia may forget God.

My family celebrates with a Christmas tree, presents and family. Wife Chris, her brother Scott, sister Nancy and husband Greg and their sons, and my son Jeff is coming in with wife Amanda from Silicon Valley where Jeff is a programmer for LinkedIn. It should be a full house, a great meal and a happy gathering. May each of you share similar joy this holiday season!

Here is the preview for the GFA Christmas Collection. More info about each films is at our GFA website.

Merry Christmas!
All year we work with children caught in poverty and the lack of associated opportunity. The most amplified effects of poverty, however, are not seen in the children, but in the parents -- who themselves were raised in poverty by parents who, most likely, were raised in poverty -- and so on and so on. All of these people routinely face a large portion of society holding a clenched fist, railing that they are not "entitled" to anything, that charity only "enables" them their poverty (and pre-judged life style), and that they would never hire them, anyways, because of those same reasons. Jesus seems to have a different idea, however, stating throughout His written word that He came to bring them to the gospel, that they should be visited, hydrated, clothed, and sheltered; that they are rich in faith; that He will lead them out of their "captivity;" that they are blessed; that He will exalt them and raise them to sit with nobles; and that those with means are to give with an open hand.
In a thousand languages, the world continually demands “justice!,” but Jesus says that one’s own need for mercy followed by extension of that mercy to others is the only way to live. He will provide justice in His time. Right now, He brings people new hearts that are full of joy, love, and hope – during the best of times, and the worst of times (and compared to eternity - hardly any time).
Please consider supporting the Ypsilanti, MI Salvation Army Corps (or any Christian ministry) as they administer the love of God through both temporal and spiritual efforts.
All the blessings of His Christmas to you!
Kirk McCrea
http://www.onlineredkettle.org/kirkmccrea