Every few years I pursue my quest to find the Giant Vampire Bats in TARZAN ESCAPES (1936). It was the climax of the third Johnny Weissmuller Tarzan film that MGM set out to make bigger and better than TARZAN AND HIS MATE (1934). Yet today fans dismiss TARZAN ESCAPES as mediocre or worse... because they have never seen it all.

To re-cap the ending everyone has seen... to escape blood thirsty natives who had just torn several natives in two by the bent tree method, Tarzan leads the safari into a forbidden ju-ju cave that the bad natives are afraid to enter. Why is never explained. The cave is actually a tunnel through the mountain to freedom. Inside we see dead trees, a narrow path and a bubbling swamp with a few gila monsters. Jane almost falls in the swamp. Another native does and is swallowed up. In less than two minutes they emerge from the other end. Tarzan forces evil Captain Fry back into the cave where he quickly falls in the swamp. The film then ends a few minutes later as Jane stays in the jungle with Tarzan.

What follows are my current memories of seeing the film in 1954. This re-telling may add fresh details or at least credulity to my story. I had never seen a Tarzan film before since they had never been on TV. I had not been exposed to any horror films before and the Tarzans are intense. This may explain the vivid memories today, whereas if I had seen the film a few years later I might recall little at all.

My mother simply dropped me at a downtown theater in Madison, Wisconsin and came back 4 hours later. That's what parents did in those innocent days, drop off young kids on their own in a big, safe city. I must have begged to see it, but that is not part of the memory. Another odd family practice at that time was being dropped off in the middle of the film. You watch till the end, then see the other feature or shorts and then the complete film you already saw the end of. So coming into the middle of TARZAN ESCAPES, I saw the bat climax twice that momentous day.

I have a strong memory from that day of greatly preferring TARZAN ESCAPES to TARZAN THE APE MAN. The first film is slower in its pacing and does not contain the attack of the natives at the foot of the Mutia escarpment or the giant alligator fight. These were both first used in TARZAN AND HIS MATE. Sure, I saw stock footage from MATE but did not know it at the time. In APE MAN I was frightened by the scene where Tarzan fights and kills two lions and of course the giant gorilla in the pit at the climax. 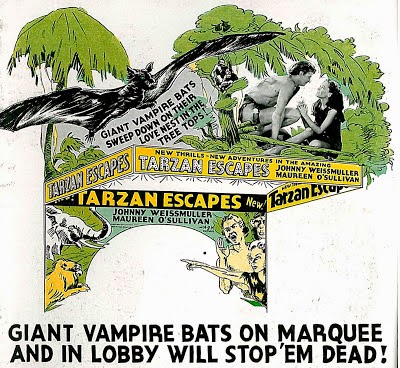 On to the memories of what few have ever seen...

In APE MAN Tarzan goes off to get dinner. He kills an antelope, gnu or similar edible beast. As he is cutting off the meat a lion attacks and he kills it in hand-to-hand combat. He staggers up and another lion attacks with similar results. It is quite an intense and convincing battle even today and can be seen in the first Weissmuller film. Now in TARZAN ESCAPES Jane similarly sends Tarzan off to get dinner. He kills another animal and swings away with the meat back to the tree house. In the ESCAPES that I saw the double lion fight is repeated. I am absolutely positive of this since I had just seen the footage, and been scared by it, in APE MAN just an hour earlier. This was my first recognition of stock footage.

Second lost sequence is quite short but equally vivid. Toward the end Tarzan is caged and sent ahead with a group of Fry's natives so that Jane will not know what is going on. This group is ambushed by the bad natives who either shoot arrows or blow gun missiles into their foreheads. Since this scene was cut, it is unclear in the surviving version how the bad natives got hold of the cage with Tarzan. 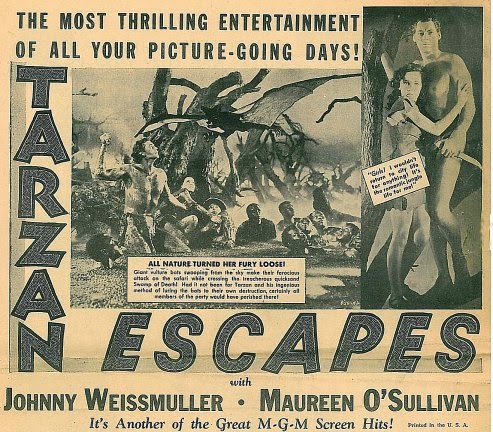 The horror/action climax is the greatest loss -- until we find it! Here are the specific shots or scenes that I recall today inside that ju-ju cave. 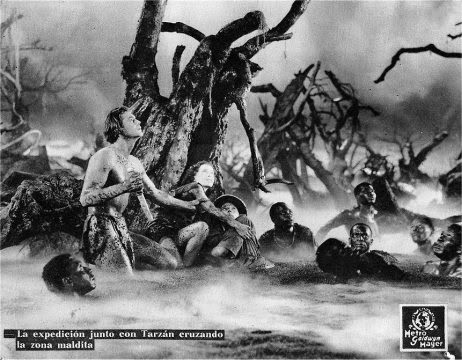 An unusual side memory of the sequence is that I wondered how the pygmies could have been enemies in TARZAN THE APE MAN but friends in TARZAN ESCAPES. 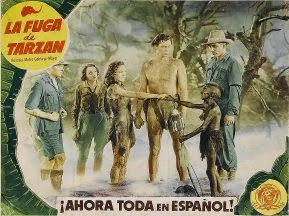 Here is a brief re-cap about why the vampire bats disappeared. In 1935 MGM made THE CAPTURE OF TARZAN that was reportedly too poor to release for various reasons like Jane rescues Tarzan at the end instead of the other way around. No tree house, they lived in a cave. Includes Great Apes like the first two films. Scenes with dozens of lions and elephants, etc. CAPTURE is a completely lost Tarzan film! The plot is in the Big Little Book of Tarzan Escapes and makes fascinating reading. In the middle of the story a safari moves through a swamp at night and the bats attack. When the decision was made to remake CAPTURE, the bat attack was the only part kept but moved to the cave setting, where one can see clouds in a night sky in a few shots.

At a 1936 MGM preview showing before release of TARZAN ESCAPES the story goes that children "ran screaming in terror from the theater." Mothers objected and MGM hastily cut some of the violence including the climax. However, prints with the vampire bats were shown in parts of the country because numerous newspaper ads exist that advertise the bats, and if you say you got bats then you sure better have 'em. So both negatives were kept in the vault. In 1954 MGM picked the uncensored negative and made around 60 35mm safety prints for distribution in the USA. This re-release was also widely shown in South America and Europe as depicted on many foreign posters and lobby cards, so if any foreign archive kept a print, look for the bats there. Since the foreign versions were subtitled, they may have been used for foreign VHS releases in the 1980s.

In the 1960s when MGM made up prints for rental by Films Inc. and for television, they picked the censored version, probably by accident, and that is all that has survived since.

If any Tarzan fan saw the 1954 re-release double feature when I did, please write to me, Ron Hall, at fesfilms@aol.com so we can compare notes.

I wrote much more about the lost vampire bats in an article for Erbzine, the Edgar Rice Burroughs website, about 8 years ago. Please read about it HERE.

This trailer was made for the unreleased 1935 version of TARZAN ESCAPES, aka CAPTURE OF TARZAN. It promises giant vampire bats, but sadly not even a second of film footage. The MGM promo that follows the trailer contains a brief shot of Jane with a Great Ape from Escapes (there are no great apes in the 1936 release.)