Before the year 2000 or so I sold lots of obscure, rare and wonderful foreign films on VHS to colleges and video stores. The video sales were mainly thru large wholesalers Facets Multimedia, Tamarelle Films and a few I can't recall now. This was back when video stores were flourishing and progressive ones near colleges wanted foreign classics to stand out from competitors. The pricing was good compared to now, with suggested retail at $59.95. This meant, very roughly, that I sold to the middle man for $30 and they re-sold for $42. Those were good years and fun ones.

Believe it or not, major classics of world cinema were public domain in the USA because they had not been properly registered and renewed as required for US copyrighting: Seventh Seal, Wild Strawberries, Seven Samurai, Rashomon, Exterminating Angel, Open City, Paisan. In fact I sold all of these to colleges on 16mm before home video started around 1980.

Focusing this discussion to Italian films, here are some I sold on video: Triumph of the Will, Il Sorpasso with Vittorio Gassman, White Nights with Marcello Mastroianni, La Grande Guerra with Gassman, Joyful Laughter with Anna Magnani, the wonderful medieval fairy tale The Iron Crown, Children are Watching, Voyage to Italy, Stromboli and many other Rossellini films.

In 1994 a new worldwide copyright law was passed -- Copyright Restoration Under the Uruguay Round Agreements Act -- that came to be called GATT. This said that foreign film makers could reacquire rights to their films by filing papers with Library of Congress. Most of them did. Some filed who had no connection with the films, like an individual in Mexico who claimed to own hundreds and eventually went to jail over it, or so I heard. They were supposed to file within a few years of 1996 but applications were accepted for at least ten years.

So I stopped selling those Italian films. Criterion is an excellent company that bought rights, restored and reissued many of them, although someone claimed rights to The Iron Crown (1941) but has still not been released it in the USA. With no video stores and declining DVD sales, it is no longer viable for the owner to issue on DVD. The constitutionality of re-protecting public domain films and music was challenged by Stanford University Law School in a suit that lasted roughly from 2002 to 2012 and ended as a loss in the Supreme Court. I was part of that lawsuit.

Although GATT ended a thriving business for me, not every single foreign film was properly reclaimed and it is now too late to do so. Only recently did I become aware that Roberto Rossellini's thrid feature film, Man with a Cross, was not protected under GATT. I just posted it for sale at Amazon and expect to sell through Alpha Video and Movies Unlimited.

I also acquired two Italian comedies from the late 1950s that have never been issued on video in the USA. An official search revealed no original registration with Library of Congress, no renewal, and no GATT filing in the late 1990s to reclaim rights. These are the English dubbed versions with complete credits and no copyright notices (©) anywhere. 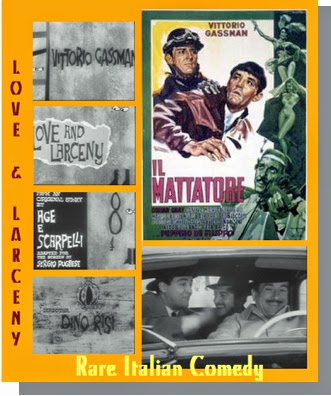 Love and Larceny is a delightful, charming comedy about happy-go-lucky Gerardo. To pick up easy money he is caught in a con and goes to prison where he learns how to swindle creatively. He then embarks on one petty scam after another, from stealing shoes and Christmas pennies to bilking motorists posing as a cop. His long-time girlfriend tries to get him a real job, which he purposely muffs. He forms an alliance with the crook who sent him to jail and they escalate into jewelry thefts and a complicated swindle involving a general and fake air force contract. Impersonating Greta Garbo to scam photographers brings his first girl back into his life, who now wants to be his accomplice, she says, but the plot only thickens. 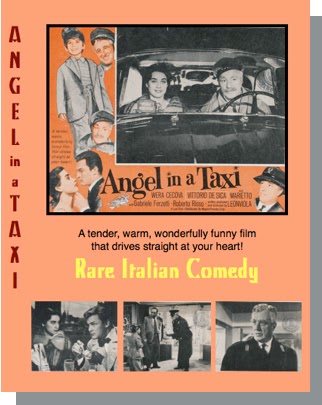 Angel in a Taxi is a charming comedy/fantasy in the tradition of Miracle in Milan that tells the story of a precocious and endearing six-year-old orphan boy, Marietto, who imagines that his lost mother is a ballerina whose picture he saw in a newspaper. When adoptive parents take him home, he runs off and joins acrobats, still harboring the dream of finding his beautiful mother. When he does locate her at the opera, he moves right in with an easy grace that brings Camilla under his spell and her life choices into focus. When Marietto feels rejected and disappears, Camilla’s true feelings surface.

Guiding Marietto’s quest and surprising destiny is an angelic figure played by the great Italian director Vittorio DeSica in three separate roles. First he is a policeman who helps Marietto pay for pastries, then a messenger who suggests he visit the opera where his “mother” is rehearsing, and finally a philosophical taxi driver who reunites Camilla and Marietto while performing a minor miracle. 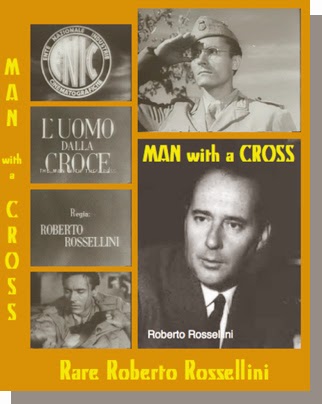 The Man with a Cross is a 1943 Italian war film directed by Roberto Rossellini and starring Alberto Tavazzi, Roswita Schmidt and Attilio Dottesio. It was only Rossellini’s third feature film and the final part of his "Fascist trilogy" following The White Ship (1941) and A Pilot Returns (1942).  To this period belongs his friendship and cooperation with Federico Fellini and Aldo Fabrizi. The Fascist regime collapsed in 1943 and just two months after the liberation of Rome (June 4, 1944), Rossellini was already preparing the anti-fascist (Rome, Open City 1945).

The film is loosely inspired by Reginaldo Giuliani, an Italian military chaplain who had been killed on active service. The film is set in the summer of 1942 in Ukraine where Italian troops are fighting those of the Soviet Union. A military chaplain volunteers to stay behind with a badly wounded Italian soldier, even though this means certain capture.

All three DVDS are for sale at Amazon, or from Festival Films directly.