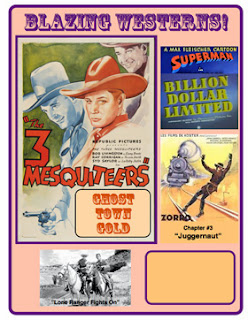 I have found increasing interest in (public domain) westerns this year, so much that I created a second Matinee Series called "Blazing Westerns."  I feel the films are slightly better than in the first "Sagebrush Saga" series.  I will give links to both pages below.

The serial that unites the 12 week series of features and shorts is "Zorro Rides Again" from 1937, starring John Carroll as a dashing modern-day Zorro who encounters trucks, planes and skyscrapers as he helps complete a railroad line to Mexico.  The fast riding and stunts feature Yakima Canutt behind the mask, while Republic's two best serial directors took turns behind the camera -- William Witney and John English.  One of the best chapter endings has Zorro's foot caught between train tracks, with escape seemingly impossible, as a speeding locomotive runs him down.

A second mini-serial in episodes 2-3-4 is the first 3 episodes of The Lone Ranger TV series starring Clayton Moore from 1949.  This tells the origin story about how the Ranger's outfit was ambushed, he was found and nursed back to health by Tonto, then acquired his horse Silver and eventually captured the bad guys that killed his buddies. 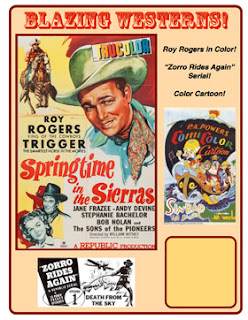 Five of the twelve features in Blazing Westerns series are in color.  The first and last are Trucolor Roy Rogers films -- "Springtime in the Sierras" and "Under California Stars" from 1947 and 1948 and both with Jane Frazee as leading lady and Andy Devine as the main sidekick.  Roy's future TV comic sidekick, Pat Brady, is prominently featured as one of the Sons of the Pioneers singing group.  Many of Roy's late-40s color westerns no longer exist in color, only 3 public domain ones survive in color, and "Springtime" was only restored recently not only in color but uncut at 75 minutes.  Here's a review from Imdb:

Springtime In The Sierras finds Roy Rogers trying to help Harry Cheshire who is animal lover and conservationist against out of season poachers. Cheshire runs an animal shelter and hospital from his place in the mountains where he also has a crusade against those who poach. Cheshire is convinced that there is an organized gang of poachers operating in his woods. His investigation proves right and he's killed for his troubles. That brings Roy into the picture big time.
Roy has two women in this film good girl Jane Frazee whose brother Harold Landon is mixed up with the poachers and Joan Lorring who heads the poachers along with her number one aide, perennial western villain Roy Barcroft. In the climax Roy and Roy mix it up along side a dandy chick fight with Jane and Joan. I also have to say that Lorring is one evil villain in this film.Andy Devine who did several Rogers films in the Forties is in this one in his usual befuddled state. Andy was a good ally to have, but he was kind of slow and there isn't a Roy Rogers film in it where he doesn't to have Roy patiently explain the situation. Of course it's a plot device to make sure the Saturday afternoon kids understood exactly what was happening, still it made Andy look stupid. As someone who is not particularly fond of hunting other than as a means for food and regulated at that, I have a soft spot in my heart for this particular film. I wish I had seen a full length version, but what I saw was cut down for television back in the day.

The other three color films are "Daniel Boone: Trail Blazer" from 1956 with Bruce Bennett and Lon Chaney Jr., and big budget "A" westerns "Rage at Dawn" (1955) in which Randolph Scott tracks down the Reno Brothers gang, and the railroad construction story "Union Pacific" (1953) starring Sterling Hayden.  Daniel Boone program includes an episode of the 1956 TV series "Hawkeye and the Last of the Mohicans" in which Lon Chaney also plays an Indian.  "Union Pacific" has an episode of Republic's 1954 "Stories of the Century" TV series which is also about a railroad investigator. 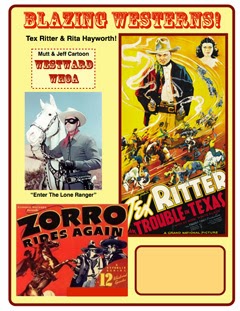 "Ghost Town Gold" (1936) is the second film in Republic's popular Three Mesquiteers series and the first with ventriloquist Max Terhune rounding out the trio with Ray Crash Corrigan and Bob Livingston.  We learn how Max won his dummy Elmer in a rigged carnival game.  In "Trailing Double Trouble" (1940) the 3 Range Busters take care of a baby and search for its mother.  This series copied the 3 Mesquiteers with Crash Corrigan and Max Terhune (now called Alibi instead of Lullaby) joined by John "Dusty" King.

Other features in the Blazing Westerns series are Gene Autry's "The Old Corral" (1936) with the Sons of the Pioneers (Gene and Roy Rogers actually have a fist fight!), two of John Wayne's 1934 Lone Star westerns: "The Star Packer" and "Blue Steel," and a third Roy Rogers "Song of Texas" (1943).  "Trouble in Texas" (1937) stars Tex Ritter and Rita Hayworth when she was still billed as Rita Cansino.  Rita is an undercover federal agent and Tex is after the same bad guys who killed his brother.  Lots of authentic rodeo action.  In this scene Rita dances, followed by a face-off between Tex and Yakima Canutt.


The Blazing Westerns! series is designed to be shown in small, vintage movie theaters as Saturday Matinees or evening fare.  They also fit well with creative programming by small, indie TV stations.  The old westerns still pack a whale of a punch, real action by stuntmen rather than special effects and solid family values.  Check out our two series at Blazing Westerns and the original Sagebrush Sagas.
Posted by Ron Hall at 4:04 PM