A Kickstarter campaign is planned to raise funding for a first new season of 13 Matinee at the Bijou shows.  The campaign will begin in June when preparations and plans are all in place.

12 episodes will be in the original format with a cartoon, a serial chapter, shorts, trailers and a fitting B-film, all restored in Hi Def.  The extra, 13th show is envisioned as a kind of documentary about the Saturday Matinee that will include previews of all the other new episodes.  This special show will be designed as both an elaborate promo for the series and as a stand alone project that might be offered to PBS as a fund raiser.  We are certain there will be great interest in PBS stations carrying this Bijou Special Edition as a pledge show if it is hosted by Debbie Reynolds or another Hollywood star, with possible co-host or hosts who are experts on serials, cartoons, comedy shorts and B-films.

We contacted Ms. Reynolds through her agent around six years ago, at which time they expressed interest pending funding and Debbie's availability at the time of production.  We have re-connected with the agent about Ms. Reynolds' participation in the Kickstarter campaign and are awaiting their reply.

Should the Bijou campaign be as successful as the Veronica Mars and other recent film projects have been, and we double or triple our budget goal, then we can produce 26 new Bijou shows instead of 13.  This would hasten our dream of a weekly Matinee at the Bijou, 52 weeks a year with never a rerun, just like when America went to the movies duirng the 1930s, 40s and 50s. 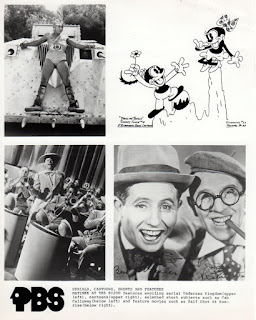 The first step preparing for a Kickstarter campaign was to establish a Matinee at the Bijou Facebook page.  You can run right over and "Like" Bijou, or wait for the repeated link at the end of this blog.  I am the administrator of the Bijou FB page and have been learning lots about FB the last few weeks.  The first thing I learned is how important that LIKING thing is.  It shows we do have fans, friends and interest.  Every time we post a new photo, video or news item on MATB Facebbok page, it appears on the feed of those who have liked us, so it is a valuable communication tool.

175 "Like Bijou" at this writing, and we are just getting the hang of how to spread the word on Facebook.  Since millions watched the show on PBS in the 1980s, we feel confident we can boost this number way up with your help!  Tell your friends.  Go to the MATB Facebook page and click "Like."  Most important, and some don't seem to get this quickly, if you make your own post about Bijou on your home page in the "What's on your mind?" section with a link to Bijou, then your 400 plus friends will see it and respond if they like the show.  Also, please post a comment on the Bijou page to tell us your memories of the original series.  Here are a few examples:

April 22  This is the best news I've had in a long time: plans are to resurrect the marvelous PBS program Matinee at the Bijou which, truly, kick-started my love for classic film in the early 1980s. I'd reckon you saw and enjoyed the program and its concept too. Show your support by visiting the Matinee at the Bijou Facebook page, and click LIKE ... let's show the great support there is for the classics! https://www.facebook.com/pages/Matinee-at-the-Bijou/626282440718659?fref=ts

Matinee at the Bijou


The Bijou series on PBS during the 1980s had a fan base in the multiple millions. We invite our fans and all who love classic movies to join the Kickstarter campaign in May to help fund the first new season of MATB in Hi-Def and hosted by Debbie Reynolds.

Many thanks, Annette!  As soon as one enters that https link, the Bijou logo and bottom blurb appear in your post.  Annette has 2,657 fans who may have first heard about Bijou plans from her.  Some of them did indeed go to the Bijou Facebook page and Like Us.

This is a program that NEEDS to come back! Everyone I know still talks about this show and how much fun it was...

I loved the short films from this! I eagerly await its return to TV!

It was on "MATINEE AT THE BIJOU" that I'd seen "TOYLAND BROADCAST" after so many years of not having MGM classic cartoons of any kind on the airwaves, outside of TOM & JERRY. it was wonderful, and I wish that the show could see a rebirth. Sure we have TCM, but "BIJOU" gives you a wonderful impression of going to the movies in the first golden age of cinema.

Oh, how I loved this show! I was only a kid when it was on, but I watched every episode! I tried to absorb anything with old films then.


Do any of you remember this great PBS show? They are trying to get a Kickstarter campaign going.
This is how you can help bring back Matinee at the Bijou today --
1) Go to the Bijou Facebook Page.
2)  LIKE BIJOU!
3)  Post a comment on the Bijou page about your remembrance of the series.
4)  Post a comment with link for all your Facebook fans to see.
You have the sincere thanks of the entire Bijou team.  Who are we?  Sounds like a good future blog topic!