Matinee at the Bijou Rides Again! 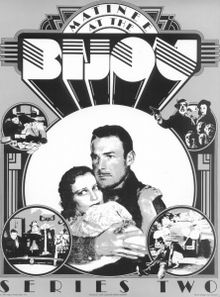 As long time fans of the series know, Matinee at the Bijou was a television series that premiered nationally on PBS in 1980. It recreated the American moviegoing experiences of the 1930s and '40s, with trailers, a cartoon, one or more selected short subjects, a cliff-hanging serial chapter “to be continued,” and a tightly edited feature presentation. The 90-minute series ran for five consecutive first-run seasons, each consisting of 16 episodes, and continued on PBS for three subsequent years in reruns. The series was an independent production from Bijou Productions, Inc., of Medford, Oregon.

Vintage Hollywood movies proliferated on television in the 1950s and 60s, but began tapering off in the 1970s as trends moved to color only.  The black and white B pictures were extinct on TV by 1980 and it was even hard to see classics like Bogart, Marx Brothers, Laurel and Hardy.  I recall when I ran a film society in the early 70s one could not see any old movies on TV.  When MATB debuted in 1980, around the birth of home video and 14 years before the debut of Turner Classic Movies, it brought back memories and started new ones.  Bijou remembered the Saturday Matinee, which died off in the mid-1950s because of television.

In 1984 I contributed a single film print for use in the 4th season, the 1934 Mascot spooky house mystery One Frightened Night.  Thus my name (Ron Hall) appears far down in the closing credits for that season, which my new Bijou partners may be surprised to discover one day on a molding VHS tape.

Around 7-8 years ago I started the Café Roxy programs of Saturday Matinees that pretty much copied the Bijou formula of cartoons, shorts, serial chapter and short feature in one package and meant for showing in small movie theaters or by TV stations on Saturdays.  One day the original Bijou producer Bob Campbell called to talk, not in any way to discourage what I was doing but to invite participation in his plan to revive Matinee at the Bijou with new episodes in high definition with a celebrity host.  We were introduced by a common friend, Conrad Sprout, and had another friend in common from Budget Films in the 1970s, Larry Fine (who has sadly passed on).  Or did I start Café Roxy after meeting Bob?  Darned if I can recall.  In either event my matinees never aspired to compete with the return of Bijou to public consciousness.

We started the Bijou Blog in 2006, or Bob started it and I joined in, to build name recognition and document revival efforts.  For awhile we tried to put up a new post every single week, and since they are still online you can read them for hours on end.  Bob first approached PBS and, after reintroducing the new players to their former hit series, they welcomed the Bijou sequel series ... if we found sponsors, produced it and gave it to them free. Finding the sponsorship has been the singular challenge! 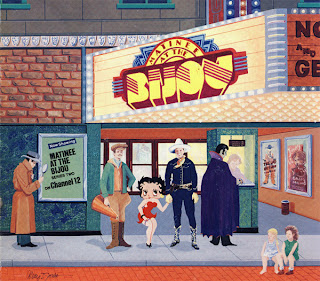 Some wonder whether the world needs Bijou anymore since we do have TCM and thousands of films are out on DVD, a medium that did not exist in 1980.  My resounding YES answer addresses many issues.  First, TCM's own success with their Classic Film Festival illustrates that vintage film interest is at a peak.  But TCM is a pay channel whereas PBS would reach millions more and for free.  The family values exemplified in Hollywood films of the 1930s, '40s and '50s never outdate.  The films themselves are as entertaining and uplifting as ever.  The Saturday Matinee is a fascinating slice of Americana that millions enjoyed and remember fondly.  It deserves to be chronicled in a documentary, which is included in our plans for the sequel series.


The first phase of this strategy was to set up a Bijou Facebook page to locate Bijou fans, send them to Facebook and ask them to "Like" us.  You can help via emails, Facebook posts and blog mentions.  Tell everyone.  Go to Facebook and Like us.  This will allow us to spread news about phase two, which will be  an official Kickstarter campaign in May to raise the funding.  To anyone unfamiliar, Kickstarter is a revolutionary way to raise money for artistic projects that allows anyone to contribute any amount to help a dream come true.  See the results of the "Veronica Mars" campaign that we hope to follow.


Here is an early history of Bijou on PBS.  You can read more about the revival plans at The Bijou Blog and at the new Bijou Facebook Page.  How is all this working so far?   To Be Continued Next Week!

Visit my websites at Festival Films and Lost and Rare.
Posted by Ron Hall at 7:27 PM