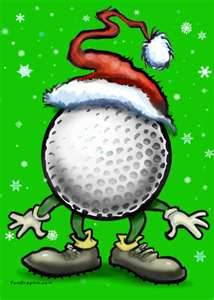 I find myself in a happy, unique position in my Festival Films career in that for the first time I have two DVD Christmas releases that show every promise of selling quite well --  Golf Mania! and Heavenly Christmas Film Classics.  Many have not been offered before on home video.  The most common film that all film buffs have seen is W.C. Fields in "The Golf Specialist," but how many golfers today have heard of it or of Fields for that matter?  A search of golf websites finds many instructional films and the few Hollywood features like Caddyshack, but no DVDs of vintage golf films.  Yet ask any golfer if they have heard of San Snead, Bobby Jones or Ben Hogan and you will find immense interest in the rich history of the game.

My partners Bob and Derek and I see Golf Mania! as a present to give to golfers this holiday season, or for golfers to give to themselves and have fun watching on Christmas Day.  How many golfers are there out there?  How many millions?  Who knows, but you see the potential.

Christmas is celebrated by many millions with church, carols, decorations, trees, gifts, Santa, vacation travel, a big feast and more.  It is perhaps the most beloved American tradition, a yearly celebration of faith, family and friendship.  A large part of family togetherness over the long week end is re-watching holiday film favorites on TV like Holiday Inn, White Christmas, Scrooge, It's a Wonderful Life, Rudolph, Frosty, Charlie Brown and of course A Christmas Story.  Watching as a family once a year brings back and creates new memories.  The six vintage but fresh films in Heavenly Christmas fit right in.

My immediate crusade in early October is to spread the word to the large audience I know is out there.  The first part is to find online distributors in the world of golf or Christmas, and believe me there are lots of both.  Video giants Movies Unlimited and Alpha Video (oldies.com) have started selling them on their websites and shortly in printed catalogs that will go out to thousands of customers.  The second part of the campaign is to get reviews online and blogs talking about the DVDs.  There are hundreds of GOLF blogs out there and some are responding to my screener offer.  The unique It's a Wonderful Movie website specializes in reviewing Christmas films.

Once a review appears, most readers know they can find any DVD at Amazon.com.  Type in "Golf Mania" at Amazon under Movies and TV and it comes up in first position; if you search under "All" it does come up on the first page.  "Heavenly Christmas" comes up in fourth place under Movies; but does not show in a word search under "All."  However, "Heavenly Christmas Films" search in "All" ... we're number one!

When a potential buyer finds either film on Amazon, he might be further persuaded by the favorable reviews.  Here is a review by Greg Van Beek for Golf Mania!

If there's a golfer on your Christmas shopping list, look no further! This AMAZING, two-hour + compilation of extremely rare golf films, spanning the years 1908 to the late 1950's, is sure to delight any and all 'hackers', from novice to pro.Here's a rundown of the 9 films cleverly and professionally woven together to create a unique feature film:1.) Goofy Golfers Newsreel (12 min.)Features President William Howard Taft in 1908 golfing! The first US President to take up the game. There's clips of an early Felix The Cat cartoon, footage of W.C. Fields golfing (a more hilarious golfing partner there couldn't have been), Larry Semon, and even 1930's sexpot Jean Harlow! As the narrator states "Ms. Harlow is in fine form". A shapely Harlow in a tight sweater, clearly sans bra, is indeed 'fine form'! A young Bing Crosby, circa 1932, is shown golfing with Jimmy Thompson and Viola Dana. Watch for Bing skillfully removing one hand from the club moments before taking a swing!2.) Golf Magic (1948) This 9 minute short shows skiers golfing on show in the mountains, Jack Redman showing off his trick golf clubs and strokes, John Montague golfs with both ends of a shovel (!) and a baby sinks his first putt!3.) Follow Thru (1940) A 10 minute short featuring pros Jimmy Thompson, Dick Metz, and Horton Smith demonstrate golfing techniques in the old wood shaft days.4.) Rough But Hopeful (1946) is a 10 minute novelty newsreel featuring over 20 Hollywood stars on the golf course, including Jack Benny, Red Skelton, Randolph Scott, Dennis O'Keefe, Bing Crosby & Bob Hope, and more!5.) Golf (1922) A BEAUTIFUL print of a rare two-reel silent short featuring silent comedian Larry Semon cavorting on the golf course with a villian played by none other than Oliver Hardy, about 4 years before he teamed with Stan Laurel! There's even a goofy squirrel that may have inspired the gopher sequence decades later in Caddyshack! You quickly forget this is a silent film, with the new, masterfully created soundtrack made especially for this short, complete with in synch sound effects.6.) Golfing with Bing & Bob (6 minutes) A 1998 compilation produced by Festival Films & film archivist/restorer Bob DeFlores, featuring Bing Crosby & Bob Hope cavorting on the links, circa 1930's to the 1950's. Highly enjoyable... almost like watching a mini "road to" film! 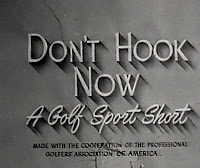 6.) Golfing with Bing & Bob (6 minutes) A 1998 compilation produced by Festival Films & film archivist/restorer Bob DeFlores, featuring Bing Crosby & Bob Hope cavorting on the links, circa 1930's to the 1950's. Highly enjoyable... almost like watching a mini "road to" film!
7.) Don't Hook Now (1942) An extremely rare two-reel short that even the Bob Hope archive didn't possess until it was discovered by film archivist / restorer Bob DeFlores. This short is worth the cost of the DVD alone! It's footage of the 6th annual Bing Crosby Pro-Am from Rancho Santa Fe (Bing's "Clambake" didn't move to Pebble Beach until 1947). Bing is joined by Bob Hope, Sam Snead, Ben Hogan, Jimmy Hines, Byron Nelson and many more! Plus, Bing even manages to croon a tune about golf called "Tomorrow's My Lucky Day"!8.) Another gem. A PRISTINE quality print of the classic 1930 two-reel short "The Golf Specialist" starring W.C. Fields. The footage of Fields on the links is priceless... he even manages to sneak some colorful language past the censors! It's all set at a Florida hotel, and Fields goes golfing with the house detective's flirtatious wife and an incompetent caddy! Laughs abound.9.) Faith, Hope, & Hogan (1953) A rare 25 minute episode of The Christopher's Show, with Father James Keller on the golf course with Bing Crosby, Bob Hope, Phil Harris, and Ben Hogan, who is interviewed about his remarkable recovery from an accident. This ranks right up there with Don't Hook Now on the rarity / enjoyability scale. Again, Bing, accompanied by guitarist Perry Botkin, croons the theme song of the Christopher's movement, "One Little Candle", a song never recorded by Bing (Perry Como had a record of the song out at the time).A fascinating, highly enjoyable (and EXCELLENT quality) DVD compilation of a veritable who's who of golf from the first half of the 20th Century! Highly recommended. This is no bargain bin DVD. It's professionally produced from the best available prints of these rare films. You won't be disappointed!

Here are handy links to Golf Mania and Heavenly Christmas.
Posted by Ron Hall at 9:32 AM