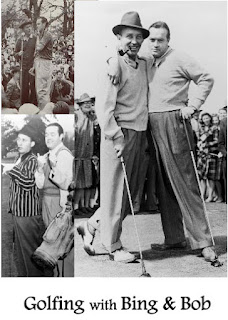 In Hollywood's rabid thirst for shorts of any kind to accompany movie shows in the 1930s and 1940s, they produced a number of golf shorts featuring famous golfers of the day and Hollywood stars.  A focus on golf also appeared in many newsreels, cartoons, comedy shorts and features.  Many of these are lost, forgotten or never heard of today even by film fans and so they fit right into "Lost and Rare Film & TV Treasures."

The lost golf film I would most like to find is The Golf Chump (1932, RKO) starring Edgar Kennedy in one of his early "Average Man" shorts.  Bill Cassara was unable to find one when he wrote his book about Edgar Kennedy and he considers it lost, although Bob DeFlores says he has seen a poor copy.

In 1998 I issued a VHS tape called Golfing With Bing And Bob in collaboration with my friend and colleague Bob DeFlores.  We created an introductory, narrated montage with the same title about Bing Crosby's contributions to the world of golf, like creating the first pro-am golf tournament.  Most of the shorts were from Bob's collection and they all included Bing Crosby or Bob Hope in some capacity.  The most obscure was perhaps Honor Caddy, a local charity film to honor golf caddies in the Los Angeles area.  We obtained the rare Faith, Hope and Hogan direct from the Christopher's organization in exchange for a better copy of their early '50s film You Can Change the World with 10 Hollywood stars.   A few years later we issued the same films on DVD with the addition of Rough But Hopeful.  The release sold well to Bing Crosby fans who we had been releasing videos to for some years. 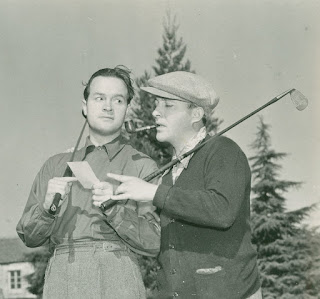 Much earlier Bob (DeFlores) had supplied all 12 shorts in the 1931 series How I Play Golf by Bobby Jones to a company that sold many thousands on VHS to golfers and brought nice royalty checks to Bob in return for about ten years.  That project had disappeared by 1998 and all of the Bobby Jones films were copyrighted so we could not use any.  We were aware of a huge audience of golfers out there, but we never had the time or know-how to find a major retailer to handle Golfing With Bing and Bob.

A bit off the subject, on the right is a recently discovered photo of Bing and Bob Hope playing golf together in 1937, a full 3 years before Road to Singapore.  They had first met in late 1932 in New York City and actually performed together onstage in the Capitol Theater for a week.  In 1937 they both had Paramount contracts and hence this publicity photo taken during a round of golf.  Their partners on the round of golf were Shirley Ross, who Bob was filming Big Broadcast of 1938 with and Mary Carlisle (still going at age 100) that Bing was filming Dr. Rhythm with. 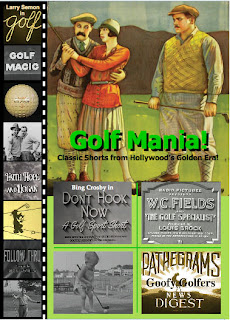 With the continued valuable assistance of Bob DeFlores, who contributed two more films to the new project, Lost and Rare is preparing a "Special Edition" release to be called GOLF MANIA.  It is featured as a "Coming Soon" work in progress at the Lost and Rare website.  One partner on Lost and Rare is Bob Campbell, the producer of the original Matinee at the Bijou on PBS in the 1980s, and a longtime Bijou associate is Tom Winmill.  By happy circumstance, Tom is both an avid golfer and a terrific salesman, and he has begun to explore outlets for the DVD in golf stores, golf club shops, online and catalog golf retailers and the Golf Channel.

Our aim is to create an appealing, constantly entertaining package of shorts to golfers everywhere.  Consequently not all of them are rare.  Many golfers have enjoyed W.C. Fields' golf game in The Dentist and his complete The Golf Specialist.  The Larry Semon 1922 comedy Golf is not a lost film, although a good copy has not been issued by a major company before.  Here is a list of the proposed contents of Golf Mania:

Golf Magic  (1948)  9 min.  Skiers golf on snow in the mountains.  Jack Redman shows off his trick golf clubs and strokes.  John Montague golfs with both ends of a shovel.  A baby sinks his first putt!

Golf  (1922)  19 min.  Silent comedian Larry Semon cavorts on the golf course as he matches wits and putts with the villain, played with great flair by Oliver Hardy. Goofy squirrel may have inspired the gopher sequence in Caddyshack!

Golfing with Bing and Bob  (1998)  8 min.  Montage of Bing Crosby and Bob Hope clowning on the links with their professional golf buddies, 1930s to 1950s.  Produced by Festival Films and Bob DeFlores.

The Golf Specialist  (1930)  20 min.  At a Florida hotel, the great W.C. Fields, goes golfing with the house detective's flirtatious wife and an incompetent caddy!

Faith, Hope and Hogan  (1950s)  25 min.  Episode of the Christopher’s Show with Father James Keller on the golf course with Bing Crosby, Bob Hope, Phil Harris and interviewing Ben Hogan about his remarkable recovery from an accident.


Goofy Golfer Newsreel is an original Festival Films production for collecting short golf snippets on the lighter side, like the W.C. Fields golf game in The Dentist.  Here are highlights from the newsreel:


Visit my websites at Lost & Rare and Festival Films.
Posted by Ron Hall at 1:38 PM