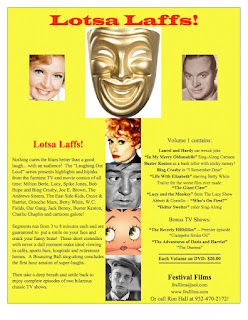 Last August I met with a local man who told me his father had recently died from cancer and the only thing that brought joy into his last days was laughing at classic comedy.  This gave the son the idea to create an online channel of streaming videos devoted to comedy.  That is a lofty goal but quite ambitious and I did not hear back from the man.  However, it gave me the idea to create a series of DVDs that were chock full of laughs, only the cream of the crop.  One projected audience was the retirement homes who prefer to watch films in one hour periods, but these would not be Movie Memories with discussion segments, only one comedy bit after another of the older films and TV shows which naturally are in the public domain.

To fill out the 2-hour DVD I would add two TV comedy episodes from shows like Beverly Hillbillies, Lucy Show, Love That Bob, Petticoat Junction, etc.

I at first called the series "Laughing Out Loud" and the first DVDs still use that name in the Introduction that is on the discs.  Then I found out Disney is about to release a feature called "Laughing Out Loud," plus of course "LOL" abbreviation one uses in emails has become an overused cliché.  So any word such on Google under Laughing Out Loud would never find my videos even if they became famous.  Ah, fame, how elusive you remain after all these years!  Anyway, an eventual name change to "Lotsa Laffs" and the funny way of spelling Laughs.  Perhaps this very blog entry will propel "Lotsa Laffs" into the Internet search engines.  Ah, fame!


"Lotsa Laffs! is perfect for cafés, sports bars, hospital laughing rooms, country clubs and retirement communities -- wherever and whenever folks need a hearty laugh out loud! 3 to 10 minute segments are guaranteed to put a smile on your face and a crack in your funny bone! A Bouncing Ball sing-along concludes each first hour session of non-stop laughs." 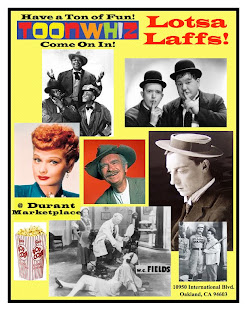 While "The Dentist" is a hilarious W.C. Fields short all the way through, the part everyone remembers is when he tries to pull the tooth of the ritzy society lady, and that can be excerpted and enjoyed on its own.    The short golf game from the same film is also great, though I have not used that to date.  Other classic bits included are Abbott and Costello doing "Who's On First" from Colgate Comedy Hour, Buster Keaton as a bank teller with sticky money from "Haunted House," Laurel and Hardy wreck their car from the public domain short "Stolen Jools," a clip from ""Lucy and the Monkey" and the trailer for "The Giant Claw" that I throw in everywhere.  Each of the four volumes is a mirth-packed two hours.  You can read about the Contents Here!

So I put them up without fanfare on my web page with a single link from my left hand column, and they have suddenly started to sell.

More importantly they were turned into the ToonWhiz Program and poster shown here. I will discuss ToonWhiz' unique operation shortly!


Visit my website at Festival Films.
Posted by Ron Hall at 11:21 AM